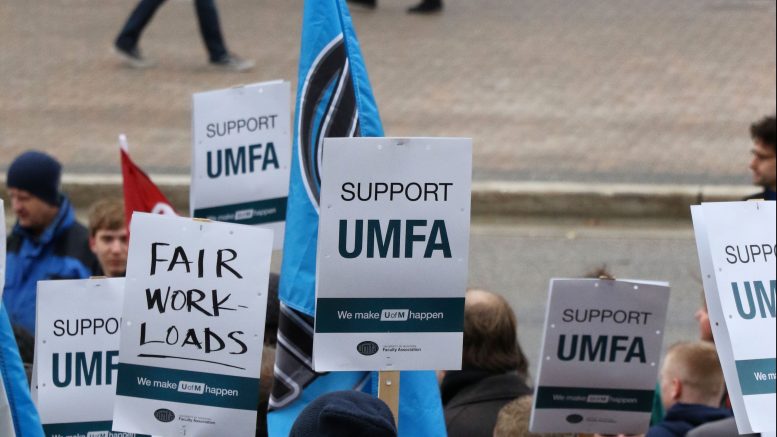 Students and teachers gather for an Info picket rally. Photo by Megan Colwell

Members of the University of Manitoba Faculty Association (UMFA) and a group of supportive students held an information picket in front of the administrative building Friday.

The rally came two days after the association representing professors, researchers, and librarians set a Nov. 1 deadline to reach a new collective agreement with the U of M.

Earlier this month, UMFA members voted overwhelmingly in favour of a strike mandate, with more than 85 per cent of ballots returned supporting the motion.

UMFA president Mark Hudson opened the rally with a speech reiterating the union’s priorities, including competitive pay, more collegial governance, and controls on the use of performance indicators, which he said the university has failed to address.

In September, the university presented the association with a four-year settlement offer, which included a seven per cent salary increase. Including existing annual increases and proposed competitive salary bumps to address specific areas of need, the average UMFA member’s salary increase would be closer to 17.5 per cent.

UMFA responded with a one year proposal, which included an average 6.9 per cent salary increase.

The union also rejected an expedited one-year, salary-only offer before negotiations began in the spring.

Following the rally, Hudson said the strike mandate was the only way to persuade the university to address the association’s concerns after six months of bargaining.

“We have been bargaining since May. We have had the same set of concerns on the table since then,” he said.

“As it has been the case in past bargaining rounds, we felt that the only way to move things forward at the table was to ask for a strike mandate from our members.”

Hudson, who has worked at the U of M since 2009, said working conditions for faculty members have deteriorated during his tenure at the university.

“The biggest issues that we hear from all of our members is that their workloads are rising and rising,” he said, pointing to a teaching load increase of more than 30 per cent for instructors in the faculty of arts.

Hudson said this has negatively impacted the U of M’s quality of education, as interactions between students and professors have become increasingly limited. As such, students, more than professors, are most affected.

Negotiations between the association and the university are ongoing and Hudson said he is hopeful for a positive outcome.

“It’s always a process of give and take, but the hope is that a strong strike mandate and a show of support like we had here today gets the university back to the table of bargaining seriously,” he said.

U of M spokesperson John Danakas disagreed that a strike is called for and said the university remains committed to reaching a deal without classroom disruption.

“The university recognizes how challenging the impact on students a labour action can be, and does not agree that a labour action is necessary,” he said in an email, noting administration has agreed to pursue mediation.

“The university wants to see bargaining with UMFA resolved, and with no negative impact on students.”

Hudson said that while a bargaining session was abruptly cancelled last Wednesday, he remains hopeful the two sides can come together at the table.

“Our hope is that, going forward, that they are at the table regularly between now and our strike deadline – that they are taking our priorities seriously,” he said.

This week, the university announced that both sides had entered mediation to continue negotiations.

Harshvir Bali, a fifth year anthropology student who supports the strike mandate, said he hopes the university deals with the issue in a timely fashion because students have a stake.

“At the end of the day, what’s more important: making money or providing quality education for students,” he said. “I’m graduating next year so I have no reason to be supporting the strike but I really do care about the quality of education for future students.”

Bali added that cutting costs has had negative impacts on the university’s quality of education, especially when compared to other Canadian universities.

Jonah Olsen, a student from the University of Manitoba Student Action Network (UMSAN) also expressed his support for the strike mandate.

“I would say that what they are fighting for affects us far more greatly than a strike would,” he said.

The U of M stands at a historic crossroads