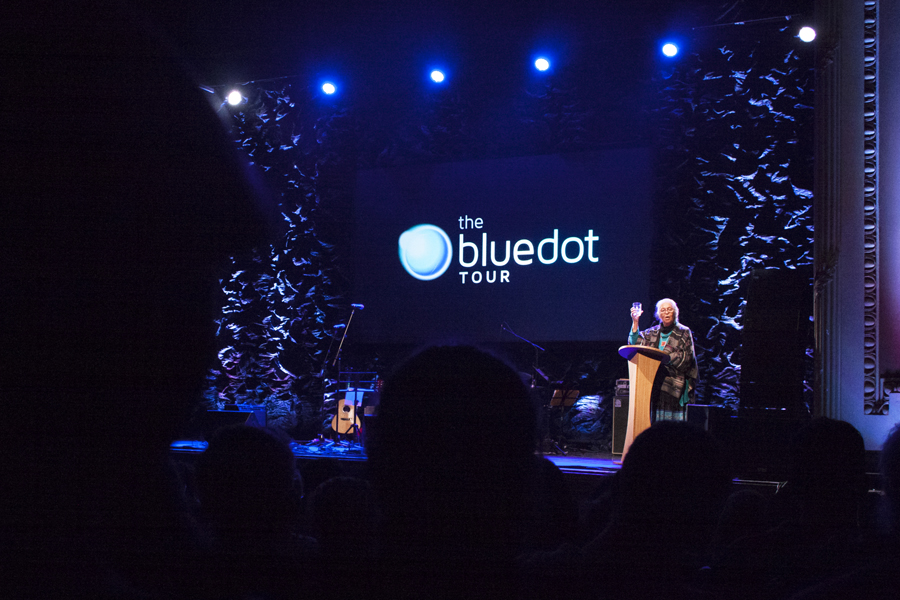 Renowned Canadian scientist and environmental activist David Suzuki led the Blue Dot Tour on their way to Winnipeg—and to the University of Manitoba campus—on Friday, Oct. 24.

The first part of the Winnipeg stop included an event held at the U of M’s Great Hall in University College, which featured indigenous ceremonies as well as panel dialogues on indigenous environmental stewardship and Aboriginal and treaty rights in Manitoba.

Suzuki was honoured by the indigenous community for his “leadership in protecting the sacred land and for being a strong voice and advocate for aboriginal and treaty rights.”

“It was very clear that his entire campaign and the people who are on that campaign tour with him are very dedicated to the indigenous [component] of environmental stewardship,” said Amanda Fontes, the U of M Science Students’ Association’s indigenous representative.

Fontes told the Manitoban that she was very impressed with Suzuki’s appreciation for and indigenous perspective on the environment.

The conclusion of the discussion panel was led by Stewart Hill, second-year PhD student of water studies at the U of M’s Natural Resources Institute, with a summary of the conversations. Hill is part of CREATE H2O, a science-engineering research training program that combines water management training with indigenous theory and law.

“Part of our responsibility as an indigenous people is to protect the environment,” Hill explained. He added, “The creator formed this earth and we have to live in it and take care of it.”

Economic compromise
During the event held at the Burton Cummings Theatre on Friday night, Suzuki explained that the four elements—earth, air, fire, and water—are referred to by indigenous people around the world as sacred and beyond economic valuation.

“The conflict between economic development and environmental stewardship is very obvious, and I think anybody can see that,” Fontes told the Manitoban. Fontes stated that any time that a country or a group of people wanted to move forward economically, there had to be compromise somewhere, and the compromise always seems to involve either human rights or environmental rights.

“We need to figure out a way to move forward economically while still protecting our fundamental rights,” Fontes said.

Hill used an example from his community in Gods Lake Narrows, Manitoba to explain the conflict between economic policy and environmental stewardship. “In Gods Lake there is gold running through our area, coming in from Ontario. We are a poor community so we need to consider the jobs but we also don’t want to destroy the land.”

Suzuki brought up another example concerning the Haida people who have traditionally occupied territories in British Columbia and continue to face extreme poverty and unemployment. Suzuki explained that even in the face of all these difficulties, when approached with the prospects of logging on their land, although it would bring jobs and money to their community, the Haida resisted.

“I applaud the indigenous communities for all the work that they have done in protecting the environment because they truly have an appreciation that other Canadians don’t necessarily have,” Fontes told the Manitoban.

A healthy environment is a right
The ultimate goal of Suzuki’s Blue Dot Tour is to amend the Canadian Charter of Rights and Freedoms to include the right to live in a healthy environment. According to Suzuki, Canada is falling behind the rest of the developed world as, unlike most other wealthy industrialized nations, it does not yet include an environmental policy in its charter.

“To me, the concept of sustainability is the long-term commitment of society to ensure that no generation suffers a decrease in opportunity or fulfillment of basic needs. There can be no need greater for any of us than a healthy environment,” Suzuki said.

“Recognition in the charter is the final step in protecting the right to clean air, fresh water, and healthy food for all Canadians. This ensures that we all benefit from a healthy environment, world-class standards, and a say in the decisions that affect out health,” reads the Blue Dot Tour website.

Environmental hazards and toxic pollution disproportionately affect people on the lower end of the socioeconomic scale, said Suzuki. He went on to explain that this is why a campaign for environmental rights is also a campaign for human rights and social justice.

Proactive activism
“The term ‘activist’ is a little intimidating because it has a very strong connotation, meaning you have to step up and be a leader when that’s not for everybody,” Fontes told the Manitoban.

“I’m not the kind of person who is going to ride my bike to school at minus 40 degrees, but I am very diligent when it comes to recycling and water consumption.

“It’s really quite simple,” Fontes explained. “Any activity that you do that helps the cause makes you an activist; it doesn’t need to be drastic.”

“I’ve never been much of a leader. I’ve always been the guy who stays in the background,” said Hill. He went on to state that, “I believe that it’s encoded in us how to be human; we just need to embrace that. There’s an inherent understanding in each of us on how to respect our environment.”

It is time for the indigenous community in particular to become active and to start standing up for their rights when it comes to the environment, Hill told the Manitoban.

“We are a very deserving people and we need to start working toward equality and fighting for our rights. Everyone deserves a good life no matter who they are, and part of that is protecting the environment we live in.”

The environment is a difficult thing to take action on and get fully united behind because of its scale, said Fontes. “In changing the constitution, we are taking that one big step that needs to be taken because it makes the entire country accountable for the environment.”

Who does UMSU really work for?