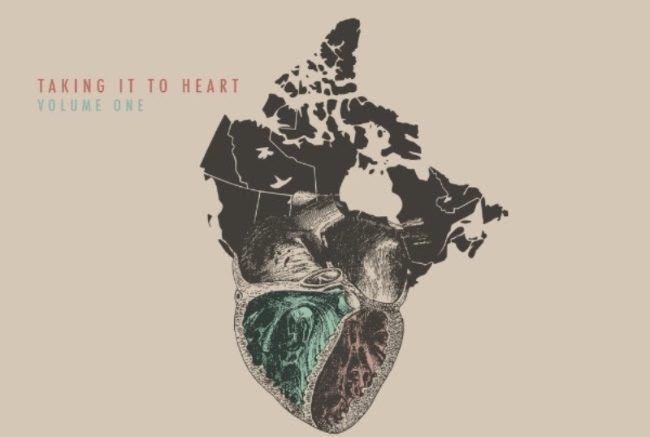 Occupational therapist and University of Manitoba alumnus Ryan Montemurro always wanted to be involved in music. Inspired by The National’s charity compilations that raised funds for the Red Hot Organization, Montemurro set out to do the same for the Canadian Heart and Stroke Foundation. He holds this cause dearly as heart disease has significantly impacted his family in the past.

He wanted to put a compilation album together featuring music he loved, but had no industry connections or musical experience. So, naturally, Montemurro decided to start his own record label Treeline Recordings.

Montemurro has been learning every step of the music production process by himself. He contacted several Canadian bands featured in his personal record collection, asking if they would like to donate a previously unreleased track to his charity compilation album Taking It to Heart, Volume One.

He asked the bands for unreleased material, as he did not want to solicit them to write a whole new song because they were not being compensated. All of the proceeds from the sales of Taking It to Heart will be going straight to the Heart and Stroke Foundation.

“The response has been amazing from people I don’t know […] having a guy contact you who has no musical experience saying, ‘Hey, I wanna put together this record, can you give me a song for free?’” says Montemurro.

Treeline Recordings was developed as infrastructure to support the production of Taking It to Heart, Volume One, and as the title of the compilation suggests, there will be more charity compilations.

Montemurro already has some materials lined up for the next volume that could not fit onto the first one, as well as other bands he is looking to contact. The release of subsequent volumes is dependent on the response and success to the first compilation as he wants to make sure he will be able to cover costs and make a significant contribution to the Heart and Stroke Foundation.

Besides giving to a worthy cause, Montemurro is happy to have gained some experience in the process of producing the album. Ideally, he would love Treeline Recordings to represent a few Canadian bands, but he wants to make sure he acquires the necessary musical and marketing knowledge and experience.

The album provides exclusive content from popular and emerging Canadian indie acts such as Winnipeg’s Duotang – whose first release in over a decade will feature on this album – as well as fellow Winnipegger Micah Visser, Broken Social Scene ’s Kevin Drew, Chad Van Gaalen, We Are Wolves, Melted Mirror, and SAVK.

The album begins with rapid drumbeats and 80s-inspired synths on a high-energy track by Dan Boekner’s latest band, Operators. Melted Mirror keeps the 80s synth vibe going with a moodier track, but the album slows down with Alberta by Kevin Drew of Broken Social Scene. The mellow and guitar-driven instrumentation on Alberta sets the pace for a few more tracks. Overall, Taking It to Heart gives the listener a broad scope of Canadian indie acts and performances.

Despite the lack of an underlying theme, as bands did not write music specifically for the compilation, Taking It to Heart does not sound like a bunch of randomly selected songs. Montemurro based the artist selection off his own taste, with an overarching genre of “indie rock,” but the tracks are very different from each other.

The sequence of the tracks provides some coordination for the compilation, as any properly assembled playlist should. Whether you are a huge fan of Canadian indie bands or want to be introduced to them, Taking It to Heart, Volume One is a collectable worth owning, and you’ll be a better person for buying it.

Digital and vinyl versions of Take It to Heart, Volume One are available at treelinerecordings.bandcamp.com