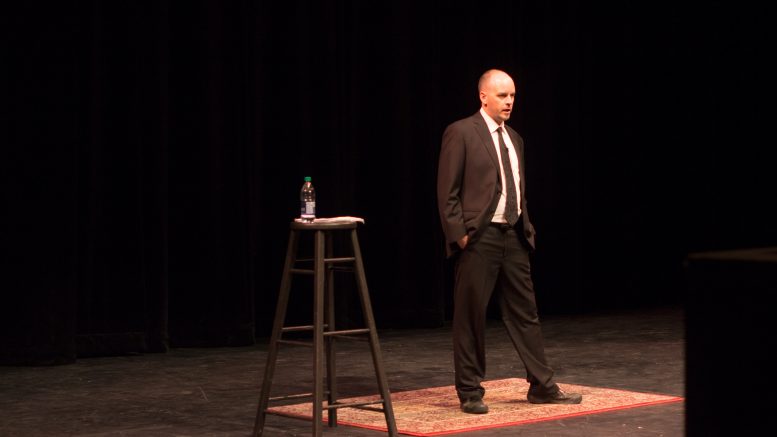 From Sept. 29 to Oct. 2, the stage curtains at the University of Manitoba’s Conklin Theatre will open to an adaptation of Will Eno’s play Thom Pain (based on nothing).

The one-man play, which was a 2005 Pulitzer Prize for Drama finalist, is produced by Winnipeg’s interdependent theatre company Snakeskin Jacket and performed by University of Manitoba alumnus Ivan Henwood.

Originally produced in 2004 at the Soho Theatre in London, Thom Pain has been featured in theatres and festivals around the world. The play has received several positive reviews, including Charles Isherwood of the New York Times’ description as a play “that leaves you both breathless with exhilaration and […] in a puddle of tears.”

“It is a modern classic,” Henwood told the Manitoban. “Will Eno is just wonderful with language – the play’s got some beautiful language in it. For me, what makes it a classic is the struggle: it is one man struggling, emotionally naked, in front of the audience.”

The play is a sardonic monologue that highlights themes of existentialism and realism. The audience follows the journey of a man’s life as he sways between grief, contentment, and felicity.

“At the beginning of the play, Thom keeps a distance between himself and the audience. The trick of the play is that, by the end of it, the audience is able to put themselves in his place and he slowly learns to trust the audience. I think people watching will be able to relate with his insecurities and struggles,” Henwood explained.

“I guess what I want the audience to take away from the play is the idea that anything is possible. No matter how down you get on yourself or how negative things may seem, there is always a little light that you can focus on.”

Henwood, who had initially planned to stage the play at the Winnipeg Fringe Festival, is excited to finally be able to bring the show to life in the recently opened Conklin Theatre, after months of planning and rehearsals with the play’s director Jane Walker.

“I am very happy and proud that we are doing the play in this space,” Henwood said.

“The Black Hole Theatre company has already done two productions here, but we are the first outside company to produce here. It is a great performance space and I think people who are coming from off campus – and on campus – would see that great theater can happen here.”

Thom Pain (based on nothing) will be playing at the John J. Conklin Theatre in Tache Hall from Sept. 29 to Oct. 2. For more information and to buy tickets, visit snakeskinjacket.ca

U of M moving ahead with partial in-person return