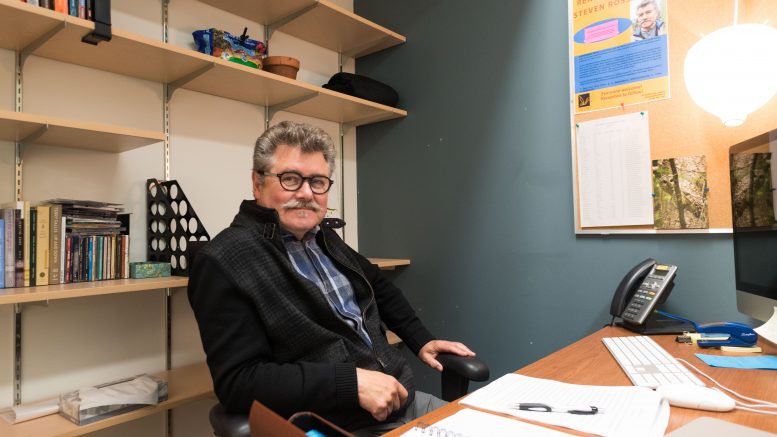 By Tobi Nifesi, with files from Michael Elves September 28, 2016

This fall, the University of Manitoba’s Centre for Creative Writing and Oral Culture welcomes Canadian poet, writer, and sound and performance artist Steven Ross Smith as the centre’s writer-in-residence for the semester. In this capacity, Smith will be mentoring aspiring student-writers during scheduled sessions at the centre.

Smith, who is currently based in Banff and Galiano Island, B.C., has been writing, publishing, and performing in Canada, the U.S., and abroad since the early 70s. His catalogue of 13 published books – including the fluttertongue book series – and performances have seen him win awards such as the 2005 Saskatchewan Book of the Year and the 2006 bpNichol Chapbook Award.

In 1971, after watching and hearing sound and performance poetry ensemble the (Four) Horsemen, Smith was inspired to explore sound poetry. Since then, he has worked to infuse performance and sound poetry – an artistic tandem of literature and music – into his writing.

“Performance and sound poetry have been part of my repertoire since I was a young writer,” Smith said in an interview with Michael Elves for UMFM’s Your Campus Today show.

“I consider any reading to be a performance and I have to give myself to that event with that attitude. I do incorporate sound poetry in my readings.”

For Smith, writing and language is more than just text and speech. It is a form of music, and in that sense, ought to be composed, arranged, and transposed as it is produced. The process of composing language determines how it is perceived and received, says Smith.

“Compositional process is very important to me,” he said. “I am kind of a sculptor in the sense that I am working language to its core, as opposed to feeling like I have a message to give to the world.

“I am not a musician, but I am certainly influenced by music. In a way, language is music. It is not just a message to communicate an idea; it has a measure of life on its own. So, when I am working, I am looking for that right note, hum, and resonance. Sometimes it comes naturally and sometimes, it comes from a lot of reworking, thinking, and research.”

Smith, who used to be the director of literary arts at the Banff Centre, has been a writer-in-residence for different organizations such as Red River College and Saskatoon Public Library, and is a mentor to several young writers.

He hopes to spend his residence at the University of Manitoba working with and mentoring students attempting to develop themselves as writers.

“In my work here at the centre, I will be feeling my way to see what fits here, but I hope to engage with the materiality of language – the sense that poetry is of the body and sentences can have torque.

“I have been a writer for four decades and, for at least three of those decades, I have done mentoring work in different contexts. I am just really interested in helping writers to develop what they want to do, have some affirmation and engagement – to find community to have a conversation with about writing.”

Smith is available for scheduled mentorship sessions from September to December at the University of Manitoba’s Centre for Creative Writing and Oral Culture. He will be hosting free workshops every Wednesday for six weeks from Oct. 12 to Nov. 16 at 390 University College.

To book a free session with Steven Ross Smith, contact the University of Manitoba’s Centre for Creative Writing and Oral Culture at ccwocwir@umanitoba.ca or 204-480-1067.

How to throw a solid Halloween party