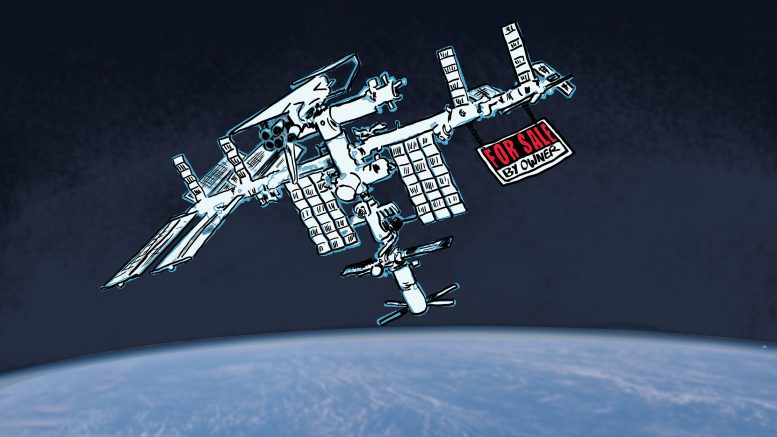 In August, it was announced that NASA has plans to eventually hand over the International Space Station (ISS) to a commercial entity in the mid-2020s.

The hope is that with the ISS in the hands of a private entity, it will continue to be funded so that research may be conducted in low Earth orbit for many more years to come.

This could also mean that the ISS could generate revenue to help continue expansion and maintenance.

Canada, Russia, Japan, and the United States have all pledged to continue funding the ISS until 2024. However, it has been reported that Russia is considering separating its modules from the ISS to begin building an independent space station.

Over US$150 billion has been spent on building and maintaining the ISS. These costs include sending modules, supplies, and astronauts.

This won’t be the first time a space station was sold to a private company. After soliciting interest to various potential buyers, Russia sold commercial rights to the Mir space station to MirCorp – a commercial space company – in 1999.

The company planned to use the space station as a platform for various commercial and tourism initiatives, including a reality television show. NBC was set to air the show, called Destination Mir.

However, politics ultimately doomed the fate of MirCorp and the Mir space station. During various obstacles, the space station was being boosted into higher orbit to slow down the deorbit time while the company tried to sort things out. The biggest advocate against MirCorp’s commercial plans was NASA, which at the time saw the company’s efforts as a roadblock to the eventual construction of the International Space Station.

In the end, Mir was put into a controlled deorbit and re-entered the Earth’s atmosphere on March 23, 2011.

How to sell a space station

It is not certain which company will take over the International Space Station, but with private space enterprises becoming much more commonplace, the ISS may see more success than the Mir space station.

It is possible that groups of companies may decide to invest in the space station together, to turn it into a research facility, a tourism destination, or a multi-use facility.

Death on the syllabus