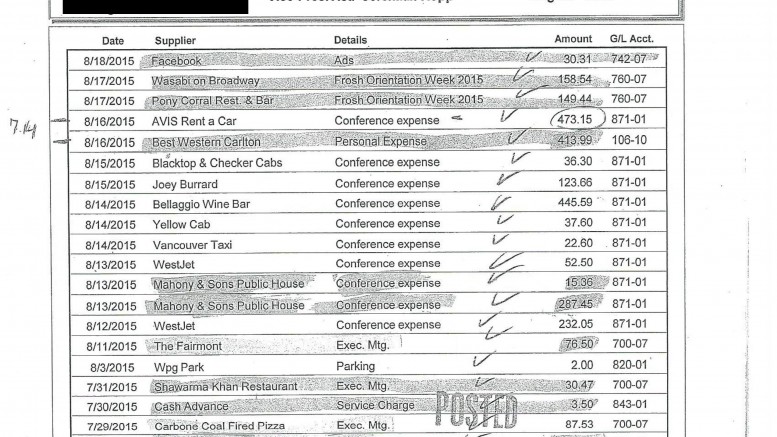 The first motion opened up the documents for review in an open session of council. Packets of documents – credit card statements, receipts, invoices, and emails – were passed around to councillors and guests.

The other two motions triggered a forensic audit of UMSU’s finances (excluding the UMSU businesses) to begin before the end of March and removed UMSU executives’ access to the credit cards pending the results of the audit.

Kopp’s allegedly unapproved expenses total nearly $14,000, according to a list circulated at UMSU council that collated these expenses by the budget line under which they were filed.


The list includes over $100 in over limit charges, $4,000 for office furniture, a $900 cash advance, $230 for Lindor chocolates, and numerous meetings at off-campus restaurants.


Also included in the packets are emails between Kopp and various UMSU staffers discussing the appropriate procedure for filing certain expenses, including ones that did not go through the UMSU credit card.

In one exchange, dated Nov. 16 (page 38 of the credit card statements), an UMSU staffer tries to determine the status of six $11 parking charges made to the UMSU credit card within minutes of each other on a day when no meetings were scheduled. The parking services officer replies that the charges are legitimate and asks whether someone could have used the card without Kopp’s knowing.

In another email exchange, dated Feb. 16 (pictured below), Kopp asks for a $295 travel grant on behalf of Bisons track and field captain Wilfred Sam-King. In response to an email from UMSU’s accounting manager stating that the grant will have to be processed through a regular meeting of the union’s finance committee, Kopp asks for the money to be processed as an executive sponsorship instead. For his part, Kopp maintains that all the charges are legitimate and were made through proper channels, and that an audit will clear his name. He said accusations that he misused the card are politically and personally motivated, stemming from a falling out between himself and UMSU vice-president student services Jessica Morrison, who resigned her position at council Thursday.

Morrison is a member of the union’s finance committee, which first raised red flags on reviewing UMSU’s credit card documents early last week, and she was the one who put forward the motion for an audit. Kopp said he and Morrison have been participating in mediation sessions.

Self-order kiosks — the future of food on campus