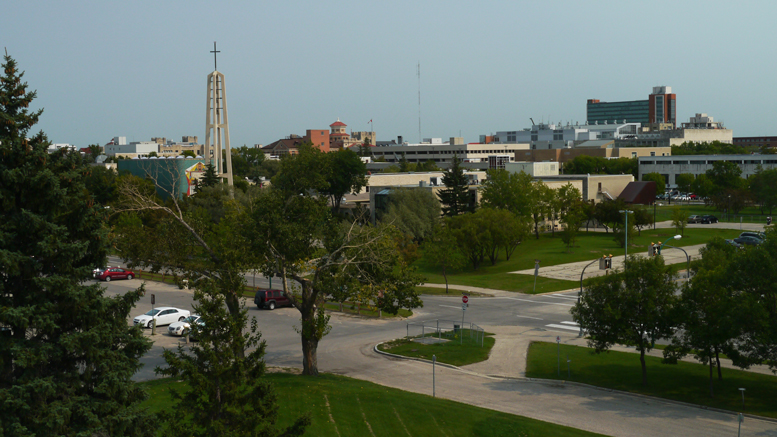 The St. Paul’s College bell tower has long been a fixture of the University of Manitoba’s skyline, but beneath the cross that hovers above the Catholic college is an institution that has experienced remarkable change over its 90-year existence.

That change, which has seen the college transition from an independent Jesuit-run institution to a closely affiliated college run by Catholic lay people, is the subject of a new book of essays commemorating the 90th anniversary of St. Paul’s titled St. Paul’s College: Facing a New Millennium.

The book explores the liturgical, academic, and communitarian value of a Catholic college on campus, with contributions by many of the staff that keep the institution running on a daily basis – from the manager of the cafeteria, Katy Louridas, to library supervisor Bill Wsiaki. It also features contributions by several alumni, including former Manitoba Lieutenant Governor Philip Lee.

“It’s the people here that matter,” Butterill said, emphasizing the long tradition of close alumni relations at the college.

“They’re all Paulinians, they’re all connected to St. Paul’s.”

St. Paul’s College first emerged out of the tension between French- and English-speaking Catholics in Manitoba, with Anglophone Irish Catholics appealing to Rome for an English-speaking Archbishop in the archdiocese of St. Boniface.

Instead, Irish Catholics were effectively given their own archdiocese in Winnipeg in 1915 with an English-speaking bishop – Alfred Arthur Sinnott. It was also in response to demands from the Irish to open an English Catholic college that Sinnott established St. Paul’s College in a 15-year-old building on Selkirk Ave., with classes beginning on Sept. 15, 1926.

Originally run by an oblate religious order, the college began as a high school teaching Grades 9, 10, and 11 with 137 students enrolled. Management of the college was later transferred to clergy of the Winnipeg archdiocese in 1931 – the same year the college moved to a site at the corner of Ellice Ave. and Vaughan St. in downtown Winnipeg and became affiliated with the U of M.

In 1931, more than 200 students were registered in the high school and 12 for university. However, management by clergy eventually resulted in significant financial losses for the college and Sinnott responded by seeking another religious order to run the institution.

In the midst of the Great Depression in 1933, the Jesuits took over the college and Father John S. Holland was appointed its rector.

“The Jesuit philosophy of education is that you are educating the whole person,” Butterill said.

After the Second World War, this Jesuit philosophy thrived as the college grew.

In the postwar years, many returning veterans received financial support from the government to pursue university studies, which saw enrolment at St. Paul’s increase from 33 in 1944 to 145 in 1947.

It was also during this period that St. Paul’s, a strictly male-only institution, began to relax its rules on gender exclusivity. Women generally attended the female-only St. Mary’s Academy, which was affiliated with the U of M as a department of St. Paul’s. But in the 1950s, women were increasingly permitted to attend courses only offered at St. Paul’s.

The college changed in short order once again, when the U of M president made an offer to the Jesuits to relocate the college to its Fort Garry campus in 1954. The offer was accepted in 1956 and a 99-year lease on the land was signed in 1957.

“By the fall of 1958 the basic buildings, containing classrooms, library, cafeteria, faculty offices, and chapel, were ready for the first students,” writes Adam Giesinger, a former professor at the College, in the 1999 volume on its history.

“The high school was left behind in the old buildings, and soon came under separate Jesuit administration. It too, in 1964, moved into a new building, this one at 2200 Grant Ave. in Tuxedo. The old site on Ellice Ave. was sold.”

Over the next five decades, the college experienced plenty of change in its governance structure, which is the focus of an essay by the current rector of St. Paul’s College, Christopher Adams, in the new book.

“We have multiple layers of governance,” Adams said.

“There is always a creative tug and pull between the university and college when we’re making decisions around here.”
Two major developments animate the governance structure of the college.

First, a 1970 agreement between the university and St. Paul’s and St. John’s Colleges “established that all faculty and students of these colleges would be members of the U of M community, while at the same time the university would be responsible for much of the college’s maintenance and operations, as well as administration and faculty.”

According to Adams, this agreement originally granted St. Paul’s a high degree of control over “the hiring of faculty replacements when vacancies arose among their faculty members.”

However, this power virtually disappeared with the formation of the University of Manitoba Faculty Association union, which ensured that “control of hiring, rank, and tenure devolved on faculty committees of the departments.”

The second major development came in 1999, when ownership of the college was transferred from the Jesuits to the college itself. But while this change may have been a difficult transition for many of the Jesuits who had lived on campus, Adams views the change as positive.

“Our management and community have worked hard to maintain the tradition set out by the Jesuits,” Adams said.

Moreover, the college maintains two centres for teaching and research related to the Jesuit mission – the Jesuit Centre for Catholic Studies and the Arthur V. Mauro Centre for Peace and Justice. Adams expects these to expand and grow over time, along with the college’s campus ministry.

“We’ve had to work hard to preserve the work that the Jesuits had done so in a way, maybe it was a good thing that we had to be creative,” Adams said.

Butterill agrees. “This is typically Jesuit, they can start something, carry it for a while, and then give it back to the community.”

How to offend a heretic

U of M raises flag on its first Pride week