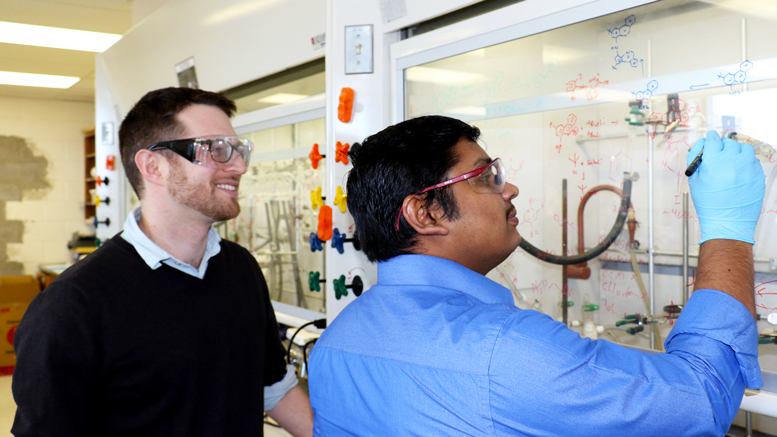 David Herbert is an assistant professor in the department of chemistry. As a synthetic inorganic chemist, he uses chemical reactions to produce particular molecules or compounds of interest.

“The focus of inorganic chemistry tends to be on the roles of elements other than carbon, hydrogen, nitrogen, and oxygen, which are the so-called organic elements,” Herbert told the Manitoban.

“Synthetic chemistry is all about moving electrons around – forming and breaking bonds.”

Inorganic chemistry also focuses on organometallic compounds, or molecules that contain a carbon atom bonded to a metal.

“Our current interests are in using inorganic chemistry to try and solve certain problems that we think are important,” said Herbert.

Herbert’s lab designs and synthesizes molecules that can be applied in a variety of different fields, including the production of clean and renewable sources of energy.

“We’re really interested in converting electricity, either derived from sunlight or renewable sources like hydro, which is hugely important in Manitoba, and using that energy to drive chemical reactions,” said Herbert.

Through these reactions, energy can be stored in the form of fuel or used to create products that are currently created using fossil fuels.

Examples would include iridium and platinum, both of which are used in materials for their light-emissive properties.

“What we’re trying to do is design molecules that can be based on more abundant elements, like copper or zinc, to perform at the same level as we can get with the more expensive and scarcer elements.”

The Herbert lab is also interested in making organic molecules by deriving the carbon molecules from carbon dioxide, reacting through a sort of artificial photosynthesis.

Photosynthesis is a process in which plants use the energy from sunlight to convert carbon dioxide taken from the air into sugar. Unfortunately, artificial photosynthesis by humans has not gotten anywhere close to the efficiency of plants – a process perfected through millions of years of evolution.

“If you are trying have solutions for things like climate change that really require the globe to act in concert, those need to be distributable […] That idea of distribution means that we have to target things that are abundant,” said Herbert.

“There is this interesting interplay between government policy and economics. There is a refrain that comes up often where politicians say, ‘We would love to do things that are expensive, but we just can’t right now because of the economy.’”

Herbert says it is important to find solutions based on abundant materials which don’t require excess costs, in order to have a chance of convincing people to adopt such technologies.

Besides the environment, there are many other reasons why divesting from scarcer elements is beneficial. For example, consider the socio-political implications of using conflict minerals sourced from the Congo in our electronics.

“One thing that I think is important about the SHArK program is that it’s not simply outreach – it’s actually an opportunity for students from local high schools to do active research,” said Herbert.

Through the SHArK program, high school students are able to look at the chemical repertoire that the periodic table has to offer, and choose different compounds to test to see if they can help facilitate this water-splitting reaction.

“The idea is to use crowdsourcing to try and discover new materials that are capable of performing water-splitting reactions.”

As the next generation is at stake if climate and energy issues are not solved, engaging young people in alternative fuel source research will help them better understand their future.

A Canadian monster in Nunavut