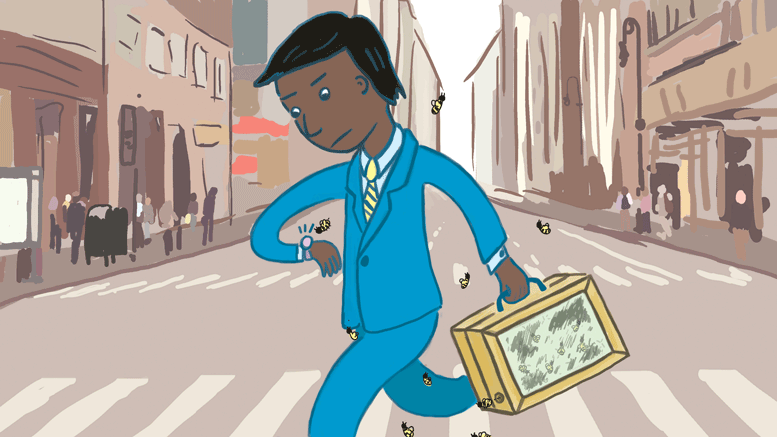 Local food production in the form of urban agriculture is one of those things that is very hard to formulate a coherent argument against. Producing your own food benefits you in money saved and costs avoided, and benefits the city as a whole in energy saved on transportation costs and increased local food security. It’s also just plain healthier, for the body and the soul, to grow what you consume.

Beekeeping is actually even more beneficial than plain old food production. Not only does it provide honey for the people keeping the bees (and usually enough extra for them to share or sell), but the bees provide an important ecological service – the pollination of flowers – for the entire neighbourhood. The entire city is made a little bit more robust and sustainable as a living system, at no cost whatsoever to anyone other than the beekeepers.

It’s the kind of improvement involving minimal cost and effort (a matter of changing the wording in zoning bylaws, nothing more) that a city should be eager to implement not for ideological reasons, but merely as a matter of best practices. Winnipeg will soon allow beekeeping on non-agricultural land. This is a good thing – the kind of good thing that most other cities did some time ago.

Unfortunately, the beekeeping will be limited to downtown, which is frustrating and vexing. One has to wonder if our not-too-bright legislators took the moniker “urban beekeeping” a tad too literally. There will never be a large number of people willing to put in the effort to keep bees, but it is certainly true that most of those willing to put in said effort do not live downtown.

Although the city will probably move in a few years to allow beekeeping city-wide, this is an unnecessary and pointless delay. For context, New York City has allowed beekeeping everywhere since 2010. Urban beekeeping will even produce money for the city – they can charge for the permits. For a city both perennially cash-strapped, and with a penchant for building unnecessary and expensive new underpasses (a cool $155 million for the one recently approved at Waverley), you would think any potential new revenue would be eagerly sought-after.

Currently, the only plans for urban beekeeping downtown come from Manitoba Hydro and the Hotel Fort Garry. Both are large corporations, and are essentially doing it for shits and giggles; their beekeeping will not provide any increase in the city’s food security. That tells you something about Winnipeg – we won’t allow beekeeping everywhere despite it being a good idea contributing to sustainability (it being a good idea, it should be city-wide), but we’ll allow it downtown because a business wanted to try their hand at it – and since said business is downtown, why bother with the rest of the city?

As things stand, you cannot keep bees or chickens, and you cannot grow food on the boulevards you are required by law to maintain – basically, you can’t do anything more adventuresome than have the same kind of vegetable garden your grandparents have. It’s time for the city to follow in the steps of bigger, better, more forward-looking metropolises, and legislate its way into the 21st century – urban agriculture and beekeeping should be allowed not because a prominent business wants a new income stream, but because it’s the right thing to do.

College of nursing grapples with palliative care and physician-assisted suicide

‘Regarding heroes’ through a master’s lens