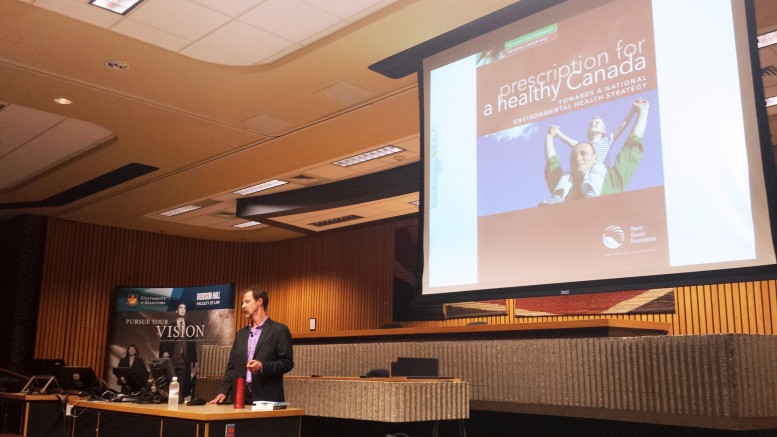 Canada needs to vastly improve its environmental laws and regulations in order to protect the health and environmental well-being of Canadians. That was the primary message conveyed in a lecture hosted by the University of Manitoba faculty of law at Robson Hall last Thursday, Sept. 24.

Boyd, an adjunct professor in resource and environmental management at Simon Fraser University, talked extensively about his new book, which is a compendium of the ongoing environmental degradation of Canada, the arguable negligence of the government, the effect of pollution on human health, the role of strong environmental laws, and prescriptions for a healthier environment.

Boyd has been a long-time environmental activist and is one of Canada’s leading environmental lawyers, having advised governments from Canada to Sweden on environmental issues and served as the executive director of the Sierra Legal Defense Fund. One of Boyd’s primary research interests is the potential of enshrining the right to live in a healthy environment as a constitutional right for Canadians.

It took Boyd 10 years to write his book, a process that began after he heard some shocking news in June 2005 shortly after he found out that his wife was pregnant.

“Two weeks after we found out that we were going to be a parents, an American health organization, Environmental Working Group, put out a profound study in which they took samples from the umbilical cords of a bunch of new born infants in the United States and tested those blood samples for the presence of industrial chemicals and what they found was a brew of heavy metals, pesticide residues,” Boyd said.

“And I thought, ‘Oh my god, we are about to be parents. This is going to be something I am going to work on into the foreseeable future.’”

“One in eight Canadian children suffer from asthma. Radon exposure is the number one cause of lung cancer in Canadians who don’t smoke – killing between 2,000 and 3,000 Canadians every year. Scientists have linked low-level pesticide exposures to the onset of Parkinson’s disease in human beings,” Boyd said.

He further told the audience about his shocking discoveries from an environmental study he conducted with a team of researchers in Canada.

“Capacity crowd of the MTS Centre is around 16,000 people and that is a conservative estimate of how many people die prematurely in Canada every year because of exposure to environmental hazards,” he said.

“We looked at four major categories – we looked at the effect of environmental pollution and degradation on respiratory illness, cardiovascular disease, cancer, and birth defects. We used the same methodology as the World Health Organization. What we found was around 10,000-25,000 deaths a year, between 80,000 and 200,000 hospitalizations, hundreds of thousands of hospital days, millions of restricted activity days for people with pre-existing respiratory disorders like asthma.”

Boyd expressed hope as he shared stories about one of his books titled Optimistic Environmentalist, which focused on solar energy opportunities and stories of endangered species that were close to extinction but are back in large numbers.

Boyd told the Manitoban that he would like to see the university embrace environmental conservation.

“One thing that I would say can happen at the University of Manitoba that would be great will be to install solar panels on the roofs of these buildings,” he said.

The role of the government in addressing environmental problems is to establish stronger guidelines that will abate the ongoing damage to the environment.

“The way forward [for the Canadian government] is to recognize that all Canadians have the right to live in a healthy environment and to put forward a national environmental health action plan with swift action that will enable us to catch up with environmental leaders like the European Union,” he said.