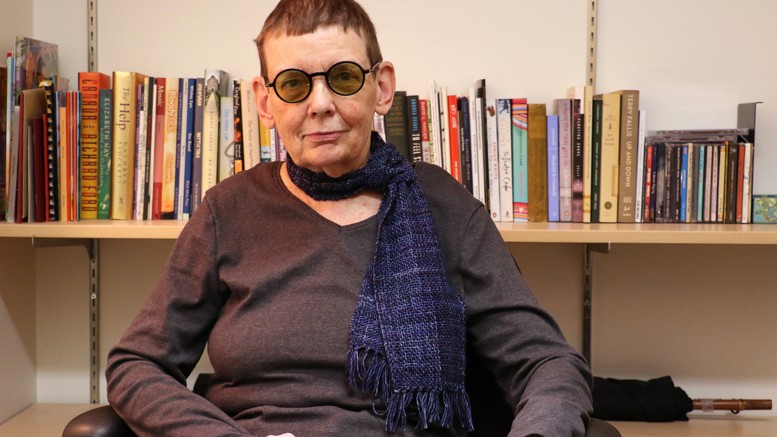 Over the next three months, students with a flair for writing will have the opportunity to be advised by the seasoned Canadian writer, Jeanne Randolph.

This winter term, the University of Manitoba’s Centre for Creative Writing and Oral Culture will be hosting Randolph as their new writer-in-residence. Randolph is more than just a writer; she is a cultural theorist and psychoanalyst whose career spans over 30 years.

Randolph said she had decided upon a career very early in life, even before she fully understood what that career would entail.

“Well, I am an odd duck. When I was in grade two, down in the swarms of Texas, I decided that I was going to be a writer. I did not even know what that meant,” Randolph told the Manitoban.

“It became very clear, as I got my [training in psychoanalytic theory], that what I really meant by ‘writing’ was to be a writer who is a cultural critic.”

Randolph’s most recent book, Shopping Cart Pantheism, is a satirical take on consumerism and religion. Randolph has written eight books and several journal articles. She has also contributed to a number of monographs and exhibition catalogues for artists like Vera Frenkel and Ian Carr-Harris.

Her books – which include Psychoanalysis and Synchronized Swimming (1993) and The Ethics of Luxury (2008) – are narratives that are loosely based on cultural and psychoanalytic theories. However, Randolph believes anybody can easily relate to them.

“My writing has almost a surreal idiosyncratic narrative flair to it […] I am really fascinated and dedicated to how the mind works, and how ideas get scrunched up in the mind,” said Randolph.

“I am not drawn to narrative of human predicaments. I am drawn to ideas and images and ambiguities so people can read in between the lines.”

“Some of the things I write are just daffy and fun, and the connection with psychoanalysis will be that they have a free consciousness to them such that the theory does not present itself out front.”

As a cultural theorist, Randolph is most interested in consumerism, technology, mass media, and other pop phenomena.

That being said, Randolph believes writing is her first and foremost obligation – one she cannot do without.

“I would say that I am obsessed or possessed; I must write. I must think about ethics, technology, mass media, consumerism, and advertising. Those things are forever my feeding ground. Nothing would stop me from writing,” said Randolph.

Randolph, who is also a performance artist, believes that literary writing is an art. Every artist has a creative niche from which they draw inspiration. For Randolph, her inspiration comes from her ability to refine existing imageries and ideas.

“I am a driven person. I am a thief. I will take an image and idea from anybody and metabolize it. That is mostly where I draw from.”

She believes it is important for writers to broaden their scope and be easily influenced, as this will enhance their creativity. This will be the focus of her weekly workshops at the Centre for Creative Writing and Oral Culture.

“The thievery of looking around, listening, distorting a phrase they have read somewhere, the ability to loosen up and take those things in like an amoeba would take in a grain of something, I encourage that.”

During Randolph’s workshops, she will use her knowledge of psychoanalysis to get the most out of students and make them better writers.

“[Writers should] not try to be so correct. I have always said that psychoanalysis is a form of portrait painting […] That means it is fair game for anything you want to do creatively,” said Randolph.

In addition to working on students’ creativity during her residency, Randolph is interested in editing written pieces and helping student writers efficiently express themselves in their writings.

For a free meeting with Jeanne Randolph, contact her at ccwocwir@umanitoba.ca or at 204-480-1067. Her office hours are Mondays and Tuesdays from 10:30 a.m. to noon. You can also attend one of her weekly workshops, held each Wednesday from Feb. 3 to March 23 (with the exception of Feb. 17, which occurs during Reading Week).  She will be in residence through to the first week of April.

Putting food on the Municipal plate