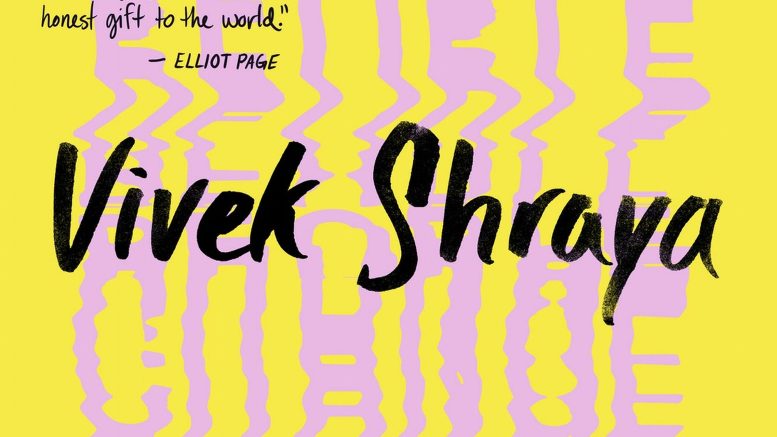 Famed playwright Oscar Wilde once said if you give a man a mask, “he’ll tell you the truth.” Multidisciplinary artist Vivek Shraya’s latest book People Change emphasizes that the mask itself brings out the inner truth of an individual.

A semi-autobiography, Shraya challenges the modern concept of reinvention, asking why “being broken [is] the mother of reinvention,” when reinvention can “predate […] trauma,” as “change is inevitable and constant” and should not be done in “fear, resignation, or even victimhood.”

Instead, Shraya believes we should “seek out change, crave it, conjure it, worship it.”

Wielding her academic training, Shraya analyzes how change and transformation has been cast as “duplicity or fraud” in western culture, particularly by those presenting a feminine identity.

Shraya uses the “popular trope in mainstream media [of] the image of a trans woman gazing at herself in a mirror, applying makeup” to lament that “The message this trope conveys to the audience is that the trans woman’s identity is something she puts on, and that she isn’t herself — rather, she’s really a he — before this act of maquillage.”

Instead, her book offers an alternate reading of these oft-perpetuated themes, that transformation is the discovery of our “true selves […] lying dormant, waiting to be unleashed,” in contrast to the “concealment” portrayed in these narratives.

Moreover, Shraya argues transformation is “the opportunity to express multiplicity” — to undermine hegemonic systems, as “the marginalized individual is systematically concretized into an identity […] as a restraint, because there’s nothing more frightening than fluidity.”

A story of her own transgender identity and a meditation on the transformation of queer identities, Shraya takes on the concept of reinvention, particularly when viewed in a queer light “as an act of survival.”

Shraya writes, “Queer people learn to hide ourselves at a young age through mastering performance.”

The concept of renaming and dressing is also dissected as “sometimes the only way to change culture is to reinvent yourself.”

“When you’re not a man,” Shraya writes, “your appearance is never neutral. Even a white dress shirt is political.”

Filled with masterful new conceptions of identity, Shraya’s writing revolutionizes how we think about how we construct ourselves.

In one of the more radical arguments in the text, Shraya states that “every time I present a new version of myself, those around me are also called upon to change,” revealing that change and transformation are daily tasks between family and friends as our individual selves are reinvented through our own perceptions and our experiences.

With death as a theme sprinkled throughout the text, Shraya also hypothesizes that “reinvention requires both a kind of death and a desire to keep living” — with each death of a part of our identity, a rebirth of a new presentation of ourselves is born.

Importantly, Shraya points to the fact that death is a part of the queer identity as her own “early experiences of homophobia had already sown the seed of suicide […] One way or another, it wasn’t safe for me to stick around. One way or another, I was going to get out.”

In fact, Shraya intersects suicidal ideation and death of identity as part of the queer experience, asserting that “Marginalized bodies continually shed parts of ourselves in order to weather the disasters of oppression.”

By emphasizing these intersections between all our versions of identity — gender, sexual orientation, dress and naming — People Change offers a radical undertaking of how the narrative of identity has been perpetuated in western culture, offering some solutions and posing difficult questions of how western culture can firmly shift the idea of reinvention into the positive.

An eloquent and short text, People Change is a must-read for those struggling with identity in our current world of identity crisis.