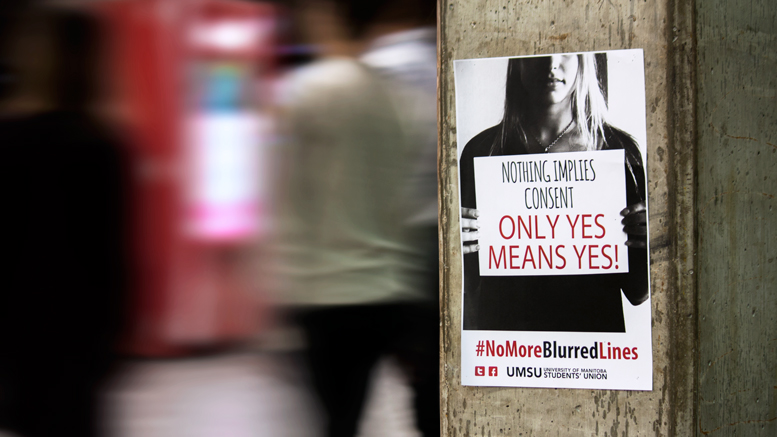 Prompted by concerns over the clarity of the University of Manitoba’s existing policy on campus sexual assault, a working group established to review existing behavioural policies has begun consulting with students, faculty, and staff at the university.

The U of M behavioural policies working group has been meeting regularly since May 2015. Its review pertains to the university’s governing documents regarding the behaviour and conduct of students, faculty, and staff at the university.

The revision is being conducted after concerns were raised surrounding the university’s existing policies, including the perceived need to clearly outline and streamline the university’s response to sexual assault on campus.

“The policies appeared to be overlapping and not always easy to understand,” said Susan Gottheil, vice-provost students at the U of M and a working group member, in an email.

“A key driver in looking at the policies is to make them clearer so people know which policy applies to a particular situation, what to expect under the policies, and where people can or should go for help and support.”

The proposed changes include revisions to the RWLE policy, which currently includes provisions that pertain to sexual harassment.

While sexual assault would still be investigated and disciplined under the RWLE, the protocol would clearly define “sexual assault” and “consent” and lay out the steps a person can take to report an incident. The protocol will emphasize that the person reporting has options on how to proceed, and that those who experience sexual assault are the final decision-makers when it comes to their best interests.

The new draft protocol defintes sexual assault as “sexual touching of another person with any object or body part without consent or by force.”

Rebecca Kunzman, vice-president advocacy for the University of Manitoba Students’ Union (UMSU), indicated that the addition of a sexual assault protocol is a step in the right direction.

“By separating the sexual assault protocol and procedure and putting it into its own document, there’s a recognition that sexual assault is a unique situation for students and needs to be addressed differently than other non-academic violent or threatening behaviours that are committed on campus,” Kunzman said. “So, on behalf of the union, we are very pleased to see that.”

“It recognizes the fact that the culture around sexual assault and the way we talk about it is changing, and that’s a good thing,” she added. “We need to make sure we’re keeping up.”

According to Kunzman, the union is now in the process of reviewing their own code of conduct and employee training programs to ensure UMSU spaces are safe for everyone.

The behavioural policies working group is currently in its consultation phase, reviewing and considering feedback on the draft revisions.

The consultations began in October of last year with the creation of a behavioural policy review website, where the proposed revisions can be viewed and feedback submitted.

According to Gottheil, a number of presentations have been made, including presentations to the student experience committee, UMSU council and senior sticks, the U of M senate, the sexual assault working group (SAWG), and others.

Once the consultation phase has concluded, the working group will submit their revisions to the senate and the board of governors.

Gottheil says the group aims for final approval by May 2016, so the revised changes can be incorporated into the 2016-2017 academic calendar.

According to Kunzman, UMSU has submitted their initial comments and questions to the working group and has secured a seat on the review committee as the voice of student input.

“We’ve been doing everything we can to raise awareness about sexual assault on campus, and I think, very much so, the university is tuned into that dialogue and is a part of that conversation,” she said.

According to data collected using the monthly reports published by security services at the U of M, there were five cases of sexual assault reported in the last year. However, experts warn that sexual assault is often underreported on university campuses and that low rates of reporting might actually signal an unwelcoming environment for members of the university community to report.

The University of British Columbia’s (UBC) lack of a specific sexual assault protocol has generated significant controversy over the past several months.

The university came under fire for its handling of multiple allegations of sexual assault levelled against a former PhD student after the story broke on CBC’s documentary series the fifth estate. In response to the documentary, an independent review of the university’s sexual assault policy is currently being conducted.

Jenna Omassi, vice-president academic and university affairs of UBC’s student union the Alma Mater Society (AMS), told the Manitoban that the union had been pushing the university’s administration to address its sexual assault policy long before the CBC documentary aired.

“We had already been working on a number of pieces, but we at the AMS did not create specific responses to the media event because […] sexual assault and prevention is something that affects thousands and thousands of students across Canada,” Omassi said.

In December, the AMS created an external policy on sexual assault which made a number of requests to the university. These included asking the university to review its processes and protocols surrounding sexual assault, bolster education, and provide specific definitions.

“As long as the university is looking more holistically at their processes and thinking about implications on all survivors, that is the only way that their revamping of processes can be effective,” Omassi added.

Democratizing campus is the only way to effectively oppose tuition hikes