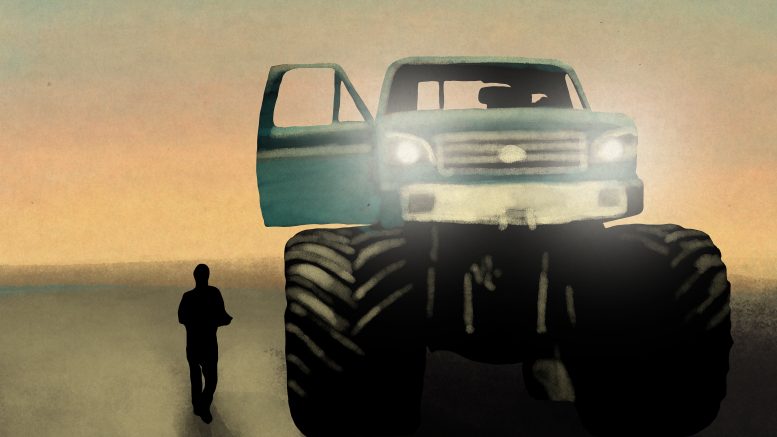 I’m sure there was once a time, long ago, when there was a reason to have a pickup truck.

Living in the prairies myself, I’m sure that many Manitobans used them for work, or for hauling or to suit a particular lifestyle. But when I drive my 2008 Toyota Corolla down Kenaston Boulevard on the way to school in the morning, I hold my breath and grip the steering wheel anytime a monstrous, hulking, lifted pickup truck with massive wheels barrels down the road in the lane beside me.

Despite their sales numbers in Canada falling at twice the rate of the rest of the automobile industry, pickup trucks occupy the top four spots on a recent list of Canada’s best-selling vehicles.

Today, however, drivers in the city don’t often use their trucks to tow and load farming supplies or livestock. They use them to take up a spot-and-a-half in the Safeway parking lot.

In 2015, senior manager of product planning and business development for Honda Canada at the time Hayato Mori told the Globe and Mail that often, the company sees “fashion” pickup buyers — those going for the “tough” image that they feel comes with driving a pickup.

Besides, I highly doubt that those who use pickups for their intended purpose tend to lift their trucks that high. Rather, these monsters are driven as a misplaced act of performative masculinity.

Daggett writes that “for many, burning fuel was a practice of white masculinity […] such that the explosive power of combustion could be crudely equated with virility.”

Aside from the glaring insecurities that massive pickup trucks in urban cities project, the vehicles themselves are just plain dangerous.

As a Bloomberg article from 2021 points out, Daggett’s paper can be used to explain the aggressive styling of the vehicles and the equally aggressive way that their owners use them. The article cited a 2020 report from the United States Environmental Protection Agency that stated that over the past decade, the drivers of over half a million diesel pickup trucks in the U.S. had been illegally tampering with their vehicles’ emissions control technology. The impact on air quality caused by just those tampered vehicles is equivalent to that of nine million additional unaltered trucks.

This is a prime example of what Daggett is talking about. These displays of power, often from those trying to exude masculinity, just make it harder for the rest of us who are just trying to get to school.

However, the problem isn’t just environmental. Pickup trucks pose a danger to both drivers and pedestrians.

In December of 2020, an 18-year-old man driving a 2020 Jeep Gladiator in suburban New Jersey hit and killed an elderly woman near her home. The driver claimed that he didn’t see the woman as she crossed using the crosswalk, and after an investigation, he was neither charged nor cited.

Now, the hood of that particular model of truck is 45.5 inches high — almost four feet, without being lifted. With a hood that high, the pickup has a large enough blind spot that it’s possible a young child crossing the street wouldn’t be visible to the truck’s driver.

Essentially, the message you send when you buy a massive, heavy, hulking, obnoxious pickup truck isn’t one of masculinity and power, like you might want. It’s that you prioritize your image over whether or not small children die.

However, the death toll that pickup trucks amass isn’t limited to small pedestrians. While pickup trucks do not account for the majority of collisions on the road, when they do crash, they have about double the rate of fatalities when compared to passenger cars.

In the case of a crash, pickups are 159 per cent more likely to kill fellow drivers than other passenger vehicles are.

I recognize, however, that in Manitoba, pickup trucks will never be eradicated. Much of our province is made up of rural land. There are many people that use pickups to help get through the harsh, snowy winters in rural areas, or to transport farming supplies in some cases. Many may see it as a symbol of Canadian culture, and may argue that in taking my position, I oppose traditional Canadian values.

Patriotic Canadians will argue that the country prides itself on community. However, when one purchases a pickup truck, they essentially say that they do not care about the people around them.

While I think pickup trucks are a blight on society, it is not just my own personal vendetta against the vehicle. The research and statistics have shown that the more pickup trucks there are on the road, the more likely something will die.

That could be the death of a child, the long-term intentional decimation of the environment or the demise of gender liberation and the perpetuation of harmful stereotypes.

Never was a story of more woe

Keep On Keepin’ On