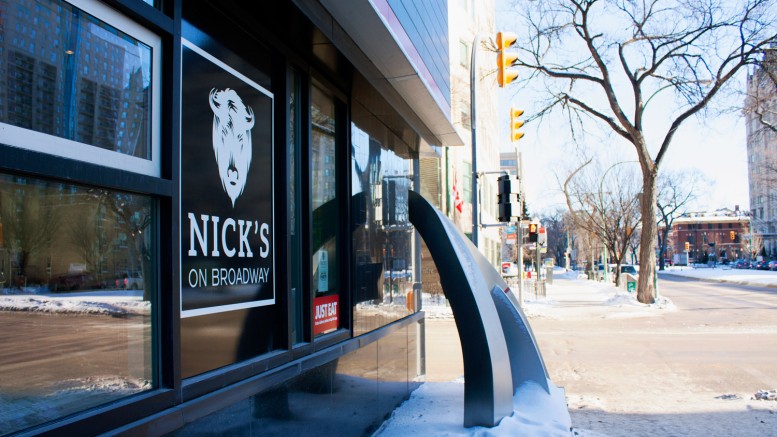 A little over a year ago, a boyhood sandwich fan spotted a vacant space on one of Winnipeg’s most historic routes. Subsequently, a unique downtown sandwich spot was born – Nick’s on Broadway.

Located on the corner of Broadway and Smith, Nick’s on Broadway is a breakfast and lunch house that specializes in home-styled sandwiches, soups, salad, and pastries.

The restaurant is run by Winnipeg-born chef and owner Nick Graumann and fellow chef Ana Damaskin.

The two met while brushing up their kitchen skills at the Culinary Institute of Canada in Charlottetown, P.E.I.

“[Nick] was starting out new and needed an extra set of hands. We had already worked together before so it kind of made sense to just come on board and jump in on this,” Damaskin told the Manitoban.

As stated on its website, the deli’s mission is “to make the best sandwiches in Winnipeg.” Sandwiches have always been Graumann’s favorite grub and he sees this restaurant as an opportunity to master the art of sandwich-making.

“For me, sandwiches are what I grew up with. It’s my life,” said Nick.

“I think what makes our sandwiches special is that we try to make as many of the ingredients as possible. […] Like for our Reuben and hot pastrami, we get it in and brine it […] it could take about a week to make our pastrami basically,” said Damaskin.

Both chefs pride themselves on their ability to provide quality food services in a beautiful space. They also try to maintain some flexibility with menu selections by switching it up every now and then.

“Part of our mandate is to keep the menu fresh. […] We probably change it every month and a half, and it kind of depends on the season and what is available,” said Graumann.

“I feel like that is almost as good as my inspiration for this; because if you had every access to every thing ever, you would not know what to cook.”

Presently, the menu’s brightest jewel has to be the pastramis. This bread and beef combo is a piquant glimpse of heaven’s bliss that deserves a page-long article – but that is a story for another day.

The restaurant’s walls are lined with beautiful photographs and artwork, including some by Winnipeg-based photographer Mike Sudoma. The owners are hoping to work with more artists and help promote their works.

“This year, we are planning on inviting more artists and hanging their works here,” said Damaskin.

“I think it would be a good way for Broadway to get a venue to hang up some arts and photography […] it is not just all about business, it is about living too.”

Broadway St., one of Winnipeg’s most historic and picturesque routes, is home to a growing number of eateries and coffee houses. Graumann believes the boom in restaurant business on Broadway is exactly what the street needs.

“The vision I had was to revitalize this strip,” Graumann said.

“I felt like this would be kind of a good point to make Broadway a good place […] There are a ton of people [living] here, we just need to get them out. Right now, we are servicing mostly the business people in the area.”

Another one of Graumann and Damaskin’s visions for Broadway is to eliminate food trucks during the summer months. He believes food trucks and their owner only constitute a nuisance on the street.

“I know a lot of people who are not business owners will disagree with me, but my biggest problem with Broadway is the food trucks. They do nothing for our tourism. We want to have people coming down and talking about the local businesses here […] not movable businesses,” said Graumann.

This weekend marks a year since Nick’s on Broadway opened and the chefs are organizing a two-day anniversary celebration. Door prizes and free snacks will be available on Jan. 15 and 16. On Saturday, the restaurant will host a number of live acts (including folk and jazz duos) to grace the event.

For more information about Nick’s on Broadway and their menu, visit nicksonbroadway.ca

Aboriginal community to be heard at UMSU council