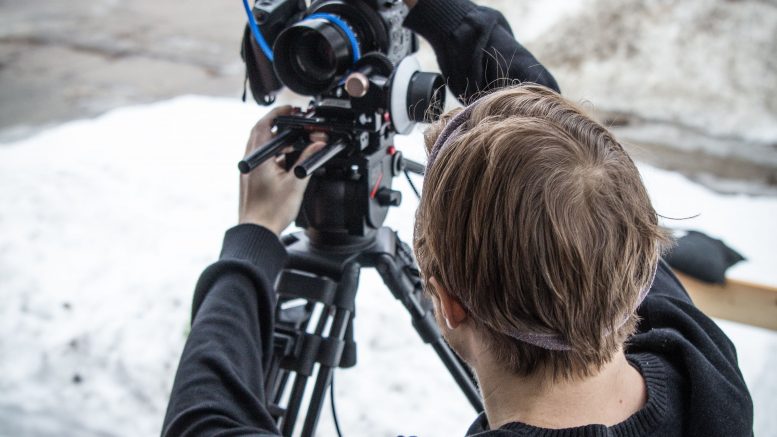 U of M student, Alec Chamber gets ready for a shoot as a part of the Film Productions course, a class where students write and shoot an entire feature length film over the course of the year.

Mélanie Joly, minister of Canadian heritage, visited Winnipeg to promote the Creative Canada Policy Framework at a luncheon hosted by the Winnipeg Chamber of Commerce Nov. 14.

After a year-and-a-half long consultation period with artists, producers, and stakeholders in the creative industries, Joly released the Creative Canada policy framework in September. The policy is the federal government’s plan to support Canadian artists in the creative sector and promote the distribution of Canadian content in Canada and abroad.

Under the framework, legislation such as the Broadcasting Act, the Telecommunications Act, and the Copyright Act will be re-evaluated to see how they might better suit the needs of the creative sector. The framework also aims to invest in local broadcast companies and local news outlets, including through the Canada Periodical Fund, which assists Canadian magazines and newspapers financially.

The minister said the framework will encourage collaboration between Google, Facebook, and Ryerson University to promote digital innovation in news and give digital news platforms a boost.

The collaboration will also allow Canadian journalists and news organizations to be more competitive and “better positioned to succeed in offering Canadians local and regional news in the years ahead,” she said.

“We value the production of Canadian local news and, as such, we will work toward modernizing aspects of the program to ensure that it meets this goal and responds to industry needs,” Joly added.

Joly said significant investments under the framework will advance the creative sector and grow the economy.

“We want to help ensure that Canada’s creative industries, and individuals within and or entering these industries are well positioned to take advantage of the changing global economy, compete in international markets, and develop innovative solutions while respecting diverse and unique Canadian viewpoints,” Joly said in reference to students studying to enter the creative industries.

Paul D. Stabell, a fourth-year film studies student at the U of M welcomed the support.

“It is really exciting to see Canada develop official policies to promote the creative sector,” he said.

“We have an incredible country with so many talented people who want to work,” he added.

“Yet so often it seems people end up feeling discouraged by the lack of opportunities and leave, or at least go to major centres like Toronto or Vancouver, to find steady work.”

Stabell said the investment in new digital platforms will allow people to be a part of projects nationally and internationally. “Technology has proven to be a decisive factor in shaping industry, and if professionals want to remain competitive in their field, not to mention part of a global workplace, they have to stay current with the tools used,” he said.

“Especially for my generation, young professionals who hope to work in the communications sector – I know it would be a great encouragement to know that every opportunity is being made to help us succeed,” he added.

In response to a question regarding the role of art in reconciliation, Joly affirmed “the importance of linguistic duality, cultural diversity and our relationship with Indigenous peoples” in launching the framework that dedicates resources to support Indigenous art.

The Truth and Reconciliation Commission, which investigated the legacy of Canada’s residential school system, issued a report with 94 calls to action in 2015. Recommendation 83 called on the Canada Council for the Arts, Canada’s public arts funder, to make funding for “Indigenous and non-Indigenous artists to undertake collaborative projects and produce works that contribute to the reconciliation process” a priority.

“The Canada Council for the Arts is also building on its commitment to Indigenous artistic expression by tripling its investment in First Nations, Inuit and Métis artists and organizations through their new Creating, Knowing and Sharing program and other initiatives,” Joly said.

Joly added that initiatives such as the creation of an Indigenous Screen Office, a multi-organization engagement that supports the Indigenous screen-based sector, are important.

“It is a great example of a mix of public  and private organizations including the Aboriginal Peoples Television Network [APTN], CBC/Radio-Canada, the Canada Media Fund, Telefilm Canada, the Canadian Media Producers Association, and the National Film Board, coming together to showcase Indigenous creators and address systemic barriers.”

Preference given to Netflix?

The Canadian Heritage department also negotiated an agreement with Netflix, which has agreed to invest $500 million over five years into producing Canadian content in both English and French, and open a production house based in Canada.

This announcement has garnered mixed reactions from the industry and politicians, with critics questioning the government’s strategy to enter into an agreement with a company that does not pay Canadian taxes and or abide by Canadian content quotas.

Saying farewell to our ‘Best of Friends’