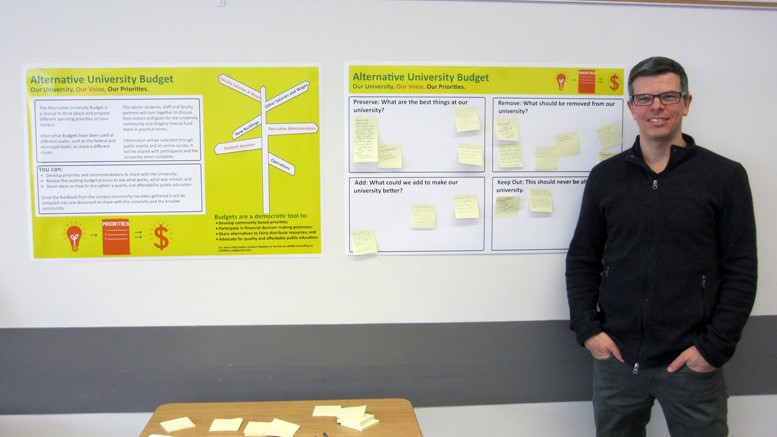 The University of Manitoba Faculty Association (UMFA) began consulting students, faculty, and staff last week as part of an effort to draft an alternative budget in contrast with the current spending priorities of the university’s administration.

The consultation process comes after the U of M’s board of governors passed a budget for 2015-16 that cut four per cent, or roughly $14.4 million, from the operating portion of the university’s $701-million budget.

University of Manitoba president David Barnard has signalled another round of four-per cent cuts is imminent this year. He has been consistently criticized for not adequately consulting students, faculty, and staff about the cuts.

“In the last budget, there were some concerns that UMFA had and that some student groups had about the extent of consultation, specifically its very limited extent,” said Mark Hudson, UMFA president.

“I think there are perfectly viable models of doing budgeting that do involve a whole lot more genuine participation.”

Last week, the faculty union attempted to model those participatory processes with an open, drop-in consultation session in University Centre.

The consultation allowed participants to fill out a form indicating their ideal allocation of resources in revenue and expense categories. It also encouraged students, faculty, and staff to publicly indicate items on a poster that should be preserved, added, removed, or never allowed as part of the budget.

The consultation process at the U of M is part of a larger effort by the Manitoba Organization of Faculty Associations (MOFA), an umbrella group comprised of the faculty unions from the U of M, University of Winnipeg, Brandon University, and the Université de Saint-Boniface.

According to David Alper, MOFA president, the organization will be engaging in an alternative budget consultation at all four of its member universities and will publish alternative budgets for three of them. It will not be publishing an actual budget for Brandon University due to the faculty union’s concern about hurting its good working relationship with administration, he said.

Alper said he hopes to have a document prepared on university funding in advance of the provincial election on April 19, with the series of three alternative budgets released following the vote and before the universities approve their respective budgets.

Alper told the Manitoban that the alternative budget consultation is a response to the lack of transparency in the budget process across all four universities in Manitoba.

“We don’t seem to understand how priorities are established. The budgets seem to be decided upon behind closed doors without any public input,” Alper said, adding that participatory processes have been used successfully in other contexts, such as municipal administration.

“We just think that the whole process should be democratized, that we should be seeking input from people who are most concerned by the decisions that administrations are taking.”

According to Michael Barkman, chairperson for the Canadian Federation of Students-Manitoba (CFS-MB), the student group has fully endorsed the budget consultation and will be actively participating in the process.

Although CFS-MB has not provided funding to help the process, Barkman told the Manitoban that CFS-MB sits on the alternative university budget subcommittee of the MOFA board.

“Our role has mostly been in terms of coordination of students and being part of the project in general,” he said, adding that CFS-MB supports the process for two reasons; that it empowers students, faculty and the university community within the budget process and demonstrates their priorities should be taken into account.

When asked whether there is any divergence of interests between CFS-MB and faculty unions at Manitoba universities, Barkman said that both organizations are united around the same goals.

“We know that research and teaching are both equally important, and we get a really good quality of research and pedagogy when faculty is well paid and when there are enough full-time faculty in each department, so I think in general that is really where the priorities of faculty and students lie,” he said.

Jeremiah Kopp, president of the University of Manitoba Students’ Union (UMSU), told the Manitoban that UMSU encourages discussion of all kinds when it comes to the university’s budget but will not be endorsing the MOFA process in particular.

“UMSU will be undergoing its own budget consultation process with its membership in a comprehensive and transparent way to be able to represent and reflect the voices of our constituents and our membership,” he said, adding “the more feedback, the more opinions, the more comments you receive in any kind of process like this can only be positive.”

The U of M administration maintains that consultations have been conducted and are on-going.

The university asked units to prepare for a three- to four-per cent cut in late 2014, instructing them to provide administration with areas acceptable for cuts. Barnard also conducted a lengthy town hall last January where he took questions about the budget process.

The U of M stands at a historic crossroads