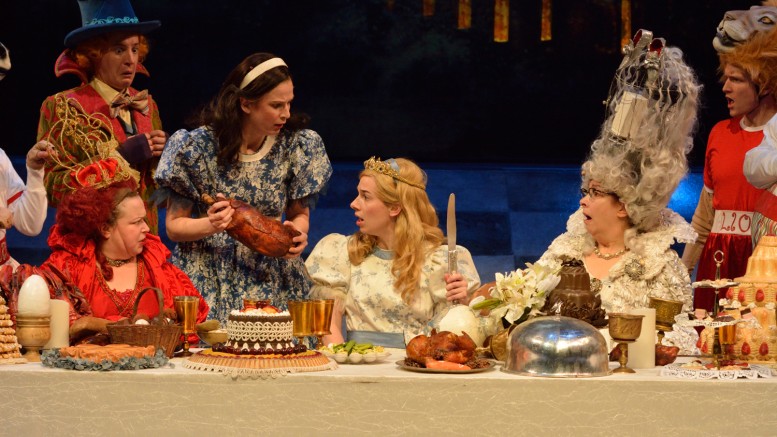 The Royal Manitoba Theatre Centre (MTC) is administering a healthy dose of fun to Winnipeggers over the next three weeks. This prescription comes by way of a debut production of Alice Through the Looking Glass, a play based on Lewis Carroll’s Through the Looking-Glass.

Renowned Canadian playwright James Reaney adapted the Alice in Wonderland sequel for stage production in 1994. Since then, the play has been performed on several stages.

In Canada, the most recent performances of the play were a production at Ontario’s Stratford Festival in 2014 and another at this year’s Charlottetown Festival in Prince Edward Island.

Jillian Keiley, artistic director at Canada’s National Arts Centre, teamed up with the MTC to bring the show to Winnipeg. Keiley, who is also the original director of the show, worked with an all-Manitoba cast for the Winnipeg production.

The play covers the well-known story of Alice, a seven-and-a-half-year-old girl, who explores a fantasy world through a looking glass.

The world through the looking glass operates on strange logical principles, wordplay come to life, and pure nonsense.

Gwendolyn Collins, who plays the main character Alice, had to turn back the wheel of time and tap into her much younger seven-year-old self to get in the right frame of mind for the role.

“The director really wanted the seven-year-old to come from me. So what I – Gwen as a person – was like at seven-and-a-half […] instead of trying to pretend to be seven-and-a-half,” said Collins.

“I went to my parents’ place and was going through photos, and I tried to remember things that happened to me [at that age] and what that felt like. The most helpful thing was taking away the adult qualities and finding what’s at the core.”

The wonders displayed on the stage translate into an exciting experience for both actors and the audience. Everything about the play oozes an infectious sense of fun.

“There are few jobs you can go to and just play all day. It’s tremendously tasking work but we have so much fun and the cast is absolutely amazing,” said Tristan Carlucci, who plays Tweedledum.

“People who’ll come to see the show would also tap into their seven-and-a-half year-old self. This is the kind of show that people see and want to come play with us onstage.”

The production’s all-Manitoba cast is a noteworthy feature. It reflects the belief in the proficiency and potential of actors in the province and bodes well for the future of Winnipeg theatre.

“A lot of the actors are my friends and it’s really cosy. This is such a great opportunity for Manitoba actors,” said Collins.

The creativity and experience of the production crew gives this show a unique and authentic edge. The artistic team consists of people who have worked behind stages all over the country.

“Although [the show’s] been done many times, every time this creative team does it, it’s a brand-new show. It does have a freshness and likeness to it because we were given the ability to bring ourselves into it,” said Carlucci.

The show promises to be a fun experiences for all ages. That being said, the show’s original director Jillian Keiley believes there is more to the show – enough to interest an existentialist.

“There are deeper philosophies in the book and in the show about existentialism, ontological things, mathematics, and there’s a lot of commentary on religion.”

Alice Through the Looking Glass will be performed on the MTC mainstage from Nov. 26 to Dec. 19. Tickets for the show start at $26 plus GST. For show times and ticket information, call the Royal MTC Box Office at 204-942-6537 or visit www.royalmtc.ca

Correction: The first version of the article posted incorrectly listed actor Tristan Carlucci as both Tweedledee and Tweedledum, when he only portrays Tweedledum. The actor’s name was also misspelled as “Carlossi.” We sincerely apologize for the error.

Just turn off your cellphone

“Nerd” is not an insult

The bookstore of the present is closing its doors