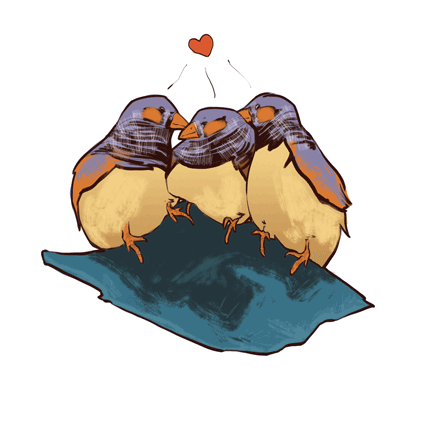 Human beings and zebra finches don’t seem likely to have much in common, but new studies show that we agree on at least one front: love is a complicated thing.

Most animals appear to choose their mate based on physical or genetic traits that would result in an increased chance at healthy reproduction, and with this in mind it’s easy to pass off the idea of “love” as an emotion exclusive to humans. These birds are proving that this is not necessarily the case.

Zebra finches (Taeniopygia guttata) are small, cute, and very popular as pets. They are quick to adapt to their environment, are less likely to become ill than most birds, and they waste no time attempting to breed. This, however, does not mean that they are not choosy.

Zebra finches look for a mate for life and are socially monogamous the vast majority of the time. Couples raise their chicks together and share parenting duties. There are a few other animals that are monogamous for life as well – beavers, for example – but what makes the zebra finch so special is how they choose their significant other.

It turns out, much like humans often try to claim, looks really don’t matter to the zebra finch. In fact, like humans, female finches have attributes that they personally prefer in male finches that may differ from their fellow females.

A study by Malika Ihle of the Max Planck Institute for Ornithology in Seewiesen, Germany, wanted to test just how important letting zebra finches “fall in love” was to their likeliness to reproduce.

Ihle, along with a team of researchers, proceeded to let 160 single zebra finches to get to know each other in groups of 20 males to 20 females. When the birds had found a partner, which was visible when they began to groom each other, half were allowed to love the one they were with, and the other half were broken up and re-paired with a finch they did not choose.

Due to the monogamous nature of zebra finches, the birds had to be convinced that their partners had died. They were placed in smaller cages for a few months to encourage them to connect, and afterwards they were all released into a group aviary.

What happened next was surprising. Throughout the extensive amount of recorded observation, there was a constant: the finches in the arranged partnerships were three times more likely to produce unfertilized eggs. The love-struck finches, on the other hand, were 37 per cent more likely to have their chicks survive.

In the partnerships forced by human intervention there was also a greater chance of the chicks dying within 48 hours of hatching. Researchers observed that the male finches were notably less interested in raising their offspring and that the females were less interested in their male partners.

The researchers also switched eggs between the two different couple types, and found that this did not affect the likelihood of the embryo surviving, which suggests that the determining factor is parental care.

Reproduction was not the only thing affected in the forced couples. Female finches were much less likely to respond when courted by their male partners, and the males were more likely to pursue other females and act in a promiscuous manner.

Looks may not matter to the zebra finch, but the ability to choose their partner obviously does. It is unlikely, however, that zebra finches choose their mate due to genetic compatibility, as scientists have yet to find an evolved trait that would allow females to be able to know which males are indirectly compatible with them. The most likely answer is that zebra finches make the choice based on behavioral compatibility.

This also explains why the zebra finches that naturally chose each other were more likely to have healthy offspring. Female finches do not all find the same behaviours attractive. Male finches, however, all find the same quality in a female finch attractive: parental compatibility with the female. The ability to be a good parent seems more important to the female zebra finch than physical or genetic attributes.

So does this have a human application? Maybe. We are not birds, but what we have in common with the zebra finch is enough for us to understand their plight. The need for compatibility in a significant other, the despair of a loveless marriage – these are not just soap opera tropes. They might be biological desires that have basis in evolutionary traits. So if you haven’t found that special someone, don’t delete Tinder just yet. Being a hopeless romantic might just be evolution’s way of making sure you’re partnered with the perfect mate.

Light up the night

Let’s give compassion another go