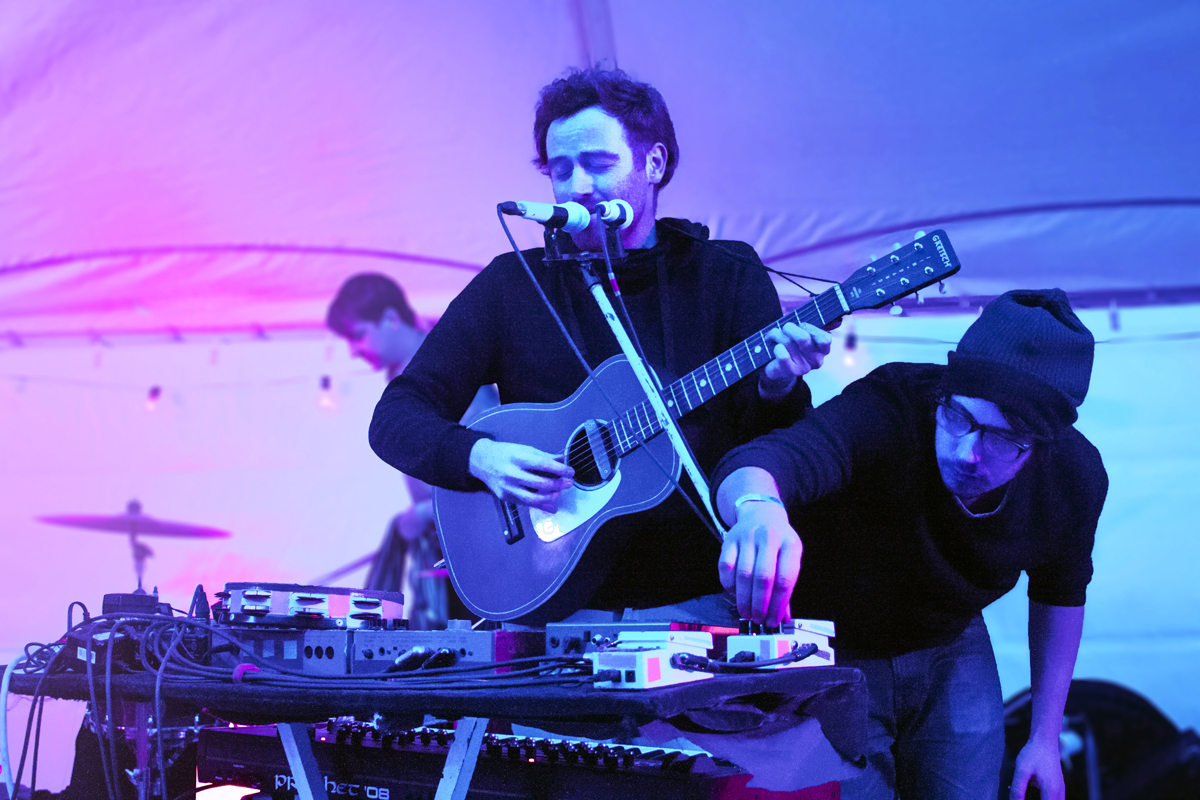 While it may have been chilly outside, the spirits of University of Manitoba students were kept warm on Thursday night at UMSU’s Frost Fest through the music of Vikings, Royal Canoe, and Magik Trix. All three bands are based out of Winnipeg, which gave the Festival du Voyageur-esque concert a hometown feel.

The many picnic tables packed into the heated tent provided for the night’s festivities on the quad were scarcely used, thanks to the dance-worthy sound each group provided.

Vikings, an electric/pop style group, kicked off Frost Fest. As openers for the main act, Royal Canoe, their goal was to get students out of their seats and into the infectious rhythm being produced on stage.

The trio—which mixes pop songs with a number of unique sounds and instruments, such as analogue synths and electric keyboards to create a one-of-a-kind sound—had the crowd up and moving in no time.

As a band that has performed at Festival in the past, Vikings knew how to get the most out of their audience, frequently cracking jokes and inciting spirts of laughter in between songs. Their set was upbeat, fun, and a great lead-in to Royal Canoe.

It was hard not to crack a smile when Royal Canoe was announced as the headliner for Frost Fest. The six-person band exemplifies Winnipeg brilliantly through their music, especially with the 2013 release of the band’s newest album, Today We’re Believers. The strong, urban sound keys in on not only on the music the listener hears, but also the way it makes them feel.

The band has stated in the past that their music is primarily inspired by Winnipeg, their hometown, making local performances that much more special. Playing at venues such as Festival, and now Frost Fest, adds an even more memorable aspect, according to vocalist and guitar/percussion player Bucky Driedger.

“It’s always good to play in Winnipeg, especially in the winter, because we have to deal with a lot of it,” Driedger said.

“It’s always good to be a part of making the winter suck a little bit less.”

Royal Canoe is well-known for bringing a large number of instruments, pedals, and other items with them when they perform, which creates a much fuller sound when on stage, compared to backing tracks. Thursday night was no exception, as the crowd was treated to an intimate and entertaining display.

“We decided pretty early on that we didn’t want to play to backing tracks. When we go to shows, we like seeing the music being made, and that element of uncertainty,” Driedger said.

“People can mess up, and there’s that push and pull of the tempos and feel. I think people, in the end, appreciate it. You go to a show, and get to see people actually playing everything. What a novelty.”

The DJ trio Magik Trix finished off the night, leaving many attendees in good spirits. Another inclusive musical group, they fed off the energy of the crowd and finished off the evening with an all-out party. Playing a variety of pop, rap, and indie music, it was easy to get into the rhythms and beats they produced.

An enjoyable show from beginning to end, Frost Fest gave students a chance to take in talented local acts for the small price of $10. With the successful turnout and high quality of music played, there’s no doubt that the university should hold the event again next year.