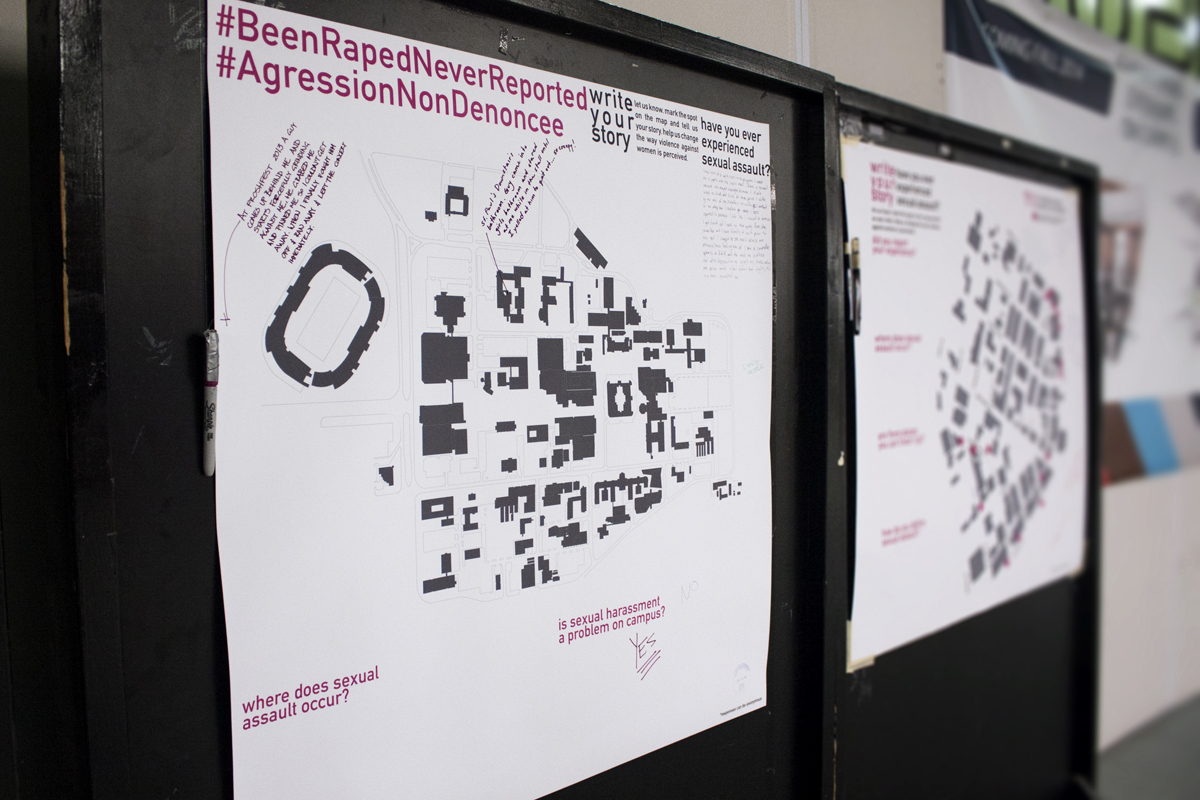 Last week, two posters featuring hashtags such as #BeenRapedNeverReported along with maps—one of the University of Manitoba’s Fort Garry campus and the other of the Exchange District—were posted next to the U of M Bookstore in University Centre.

The #BeenRapedNeverReported began trending on Twitter after several women who came forward with allegations against CBC host Jian Ghomeshi were questioned about why they did not report their violent encounters to the police.

The posters were hung in a high-traffic area on temporary dividers located in front of the food services that are presently under renovation on campus. With markers attached by string and tape dangling from the posters, the posters’ text is directed at passersby and requests them to write their own story of sexual assault; mark the place(s) where it occurred; whether they reported it; and whether there are places they will avoid because of fear of assault.

The posters’ heading reads: “Help us change the way violence against women is perceived.”

As also read on the poster, “71 per cent of incidents of sexual assault are not reported.”

According to the same report, in Canada in 2009—excluding data from the territories, and based on self-reporting in a sample survey—88 per cent of sexual assault incidences were not reported to the police.

In a fact sheet by the Canadian Federation of Students-Ontario about reporting sexual assault, they noted that “statistics related to sexual and gendered violence are often based on reports that are formally reported to police. However, most cases of such violence are not reported by victims for several reasons.”

A look behind the maps
The maps do not provide indication about who posted them or which group or individual is responsible for them. No one has yet come forward to claim ownership.

The maps—having received the official stamp of permission to post posters in University Centre—were posted on wooden dividers in front of the temporary wall for the food services renovations. Rebecca Kunzman, UMSU vice-president advocacy, said that all posters in University Centre must be given approval stamps at Answers. The sexual assault maps were posted on spaces rented out by U of M Conference and Catering Services.

Answers is not permitted to provide approval for materials without any indication of affiliation within the university.

Conference and Catering Services would not provide the Manitoban with information about who was responsible for renting the spaces or posting the posters on the rented spaces. The U of M ancillary services—responsible for overruling the approval of materials such as those without indication of affiliation—was unable to provide any indication of affiliation by the time of publication.

The Manitoban was unable to confirm who was behind the posters.

Kunzman and Reanna Blair, UMSU’s women’s representative, both said they had seen the posters but did not know who had posted them.

One Health Sciences Centre sexual assault nurse, Candace Wylie, said, “It is disconcerting. The posters should be saying who it is from because it is a very sensitive topic,” referring to the lack of information and indicated affiliation.

“If you’re going to share [sexual assault] experiences, you should be offered information as to resources that you can access.”

A look at the maps
Two comments written on the campus map draw attention to places where there are no cameras, one of which states it made the commenter feel unsafe at night.

When asked if additional cameras would increase her sense of safety on campus, Erin McNally, second-year U of M biological sciences student, said, “No.”

“Maybe you can catch somebody after the fact, but if you actually started talking about [sexual assault] more and addressing the issues, then maybe you wouldn’t need all the cameras,” said McNally.

Though the maps draw attention to sexual assault on campus and downtown, McNally said that instances of sexual assault are not limited to those locations.

“I’ve experienced it on my own street before. Really, it could happen anywhere.”

Wanda Hounslow, a U of M sociology student and the lead initiator of the #NoMoreBlurredLines campaign by UMSU, commented on the placement of the maps in the middle of University Centre.

“I noticed that I felt self-conscious that someone would see me writing my story on there. It makes you realize how talking about this is still so taboo.”

Last Tuesday, the following post was made: “#573: To the girl who woke me up in iqs (sic) because I was snoring, it’s not a quiet area! You’re lucky I did not destroy your dark star, and entered your black hole.”

People immediately commented on the nature of the language. One person asked, “Is that supposed to be a rape reference? Cause that’s ridiculous.” Another person commented that “rape jokes are bad.”

Other commenters appeared to support the post, leaving messages that included “LMFAO” and “Buhahahahahhaha.” As of press time, the original post had received 52 likes.

The admin for UManitoba Confessions 2.0 said that, “the site’s aim is to give people a way to make public confessions anonymously. All confessions are user-submitted and unedited, and comments are unmoderated.”

“The more controversial or surprising to me that a post is, the more I’m going to post it,” the site’s admin said in an interview with the Manitoban last March.

“I’m frustrated and I’m disappointed, and I’m not surprised,” said Hounslow upon hearing about the post. “It’s a bigger problem than just one individual [the original poster]; it’s a culture that supports this individual.”

“University no longer exists solely on the physical grounds of the campus,” Kunzman said in response to the sexual assault threats that were issued online.

“A lot of university life these days occurs online. This is a community, and you have to be a responsible citizen within it.”

Hounslow is one of various students and faculty members involved with the U of M Sexual Assault Working Group. This new initiative, established earlier this term, seeks to address concerns about sexual assault on campus.

“The group is putting forward a streamlined protocol that each office [that deals with sexual assault on campus] can follow to address cases,” said Kunzman.

The group also put forth a web page for public awareness about sexual assault on the university’s website, giving clear definitions of assault and consent. The page can be accessed at umanitoba.ca/student/sexual-assault