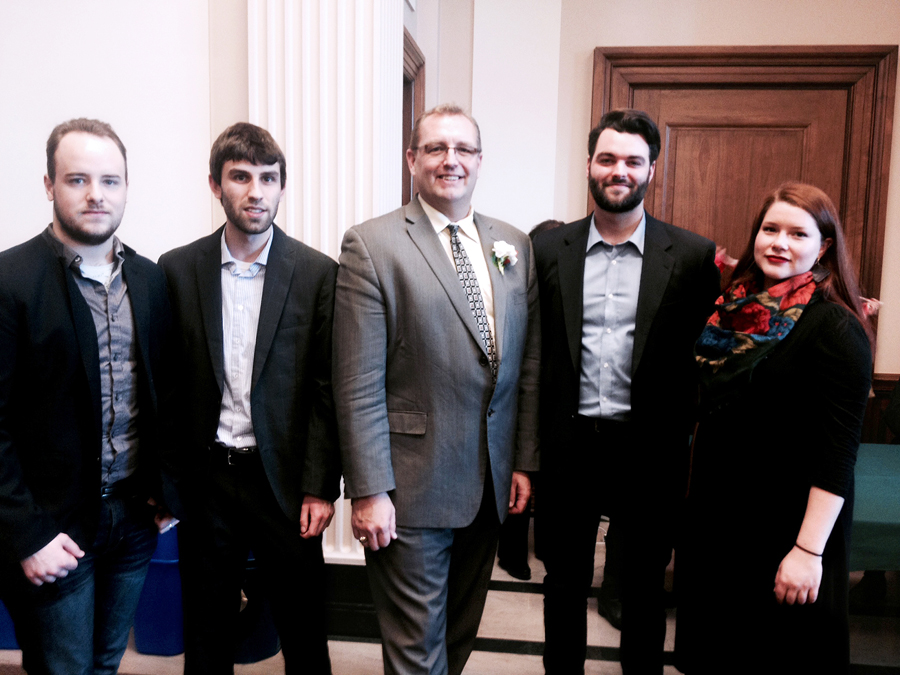 Peter Bjornson, minister of education and advanced learning, (middle) with student leaders from UWSA and CFS-MB.

The throne speech signalled the opening of a new legislative session, assessing policies of the previous decade as a period of transition from “cuts and underfunding to investment” for the future and defining the provincial caucus’s obligations to students at every level.

In particular, students across the province celebrated the government’s announcement of the elimination of interest on student loans.

Premier Greg Selinger, said in an official announcement released on Monday, about the changes to Manitoba financial student aid: “Our government is continuing to ensure that post-secondary education in Manitoba is accessible, affordable, and of a high quality by helping students keep more money in their pocket.”

“Any student with Manitoba student loans that they are currently paying off, or any outstanding student loans, are going to have the interest portion of that removed, so moving forward no student is going to pay interest on their student loans,” University of Winnipeg Students’ Association (UWSA) president, Rorie Mcleod Arnould told the Manitoban.

“I’m so excited,” said Alexandria Levandoski, a first-year nursing student at the University of Manitoba. “It’s a step in the right direction, and it will be such a great relief for students across Manitoba.”

The process of elimination
Earlier this year, students and supporters of the Education for All campaign, spearheaded by the Canadian Federation of Students-Manitoba (CFS-MB), lobbied the provincial government to eliminate interest rates on student loans.

Students at the U of M, University of Winnipeg, Brandon University, and Université de Saint-Boniface raised concerns about student debt, calling on members of the provincial government to eliminate student loan interest rates.

Over 6,000 postcards were signed by students in support of the campaign, including thousands collected from U of M students. In April, participating students and student leaders met with and delivered the postcards to the former minister of education and advanced learning, James Allum.

“Last winter we launched—on the University of Winnipeg campus—the Education for All campaign, where we were able to get over 1,000 of our students to sign postcards calling on the government to eliminate the provincial portion of interest rates on student loans,” said Peyton Veitch, UWSA vice-president advocate.

Interest rates on Manitoba student loans are set at prime rate, which works out to about three per cent.  Veitch told the Manitoban that this change is estimated to save students in total just over $1.3 million.

“Especially with being an independent and having to pay rent, pay for car insurance, pay for your own personal matters on top of school and tuition, it ends up being so much money and this is such a big deal for me,” Levandoski said.

“I still have debt from the first couple of years [of university],” she continued. “Money is always a struggle for me, and I’m working a couple of jobs and going to school so to hear [about the interest rates] is a bit of a relief off my shoulders.”

Peter Bjornson, the newly appointed minister of education and advanced learning, said that the government would not confirm the cost to them until it finalizes its budget in the spring.

The premier projected the cost at about $1 million per year, according to Mcleod Arnould.

As for when the elimination of student loan interest rates will be implemented, Bjornson told the Manitoban that this would also be worked out later in the year. Bjornson is “looking forward to having those details released to the public.”

“Thank you so much to all the students who put in such hard work representing all of us because it has definitely made a difference and it will make a difference for students in the years to come,” said Levandoski in response to the recent political move to eliminate interest rates.

Student movement movers claim victory
“This was the product of an initiative—42,000 students strong—many of whom played a part, large or small, in making this a reality,” said Veitch, who told the Manitoban that he believed this victory really underscores what is possible when students in Manitoba come together.

Hannah James, one of the core organizers of the Education for All campaign last year and a third-year family social sciences student, is thrilled about the government’s decision.

“It’s a huge step in the right direction for accessible and affordable post-secondary education in Manitoba,” she said.

James told the Manitoban that she is happy to have a government that supports students, although she is surprised that the decision was not made sooner.

“We also lobbied with the Liberals and they were already pledging to eliminate interest rates on student loans in order to try and gain the student vote.”

James said that this should have provided even more incentive for Selinger’s government to step up to the issue much sooner than it did.

“Based on the political environment right now I think it’s important for students to be supported by our government,” said James.

Canadian Federation of Students-Manitoba chairperson Zach Fleisher said that CFS-MB will be working with the department of education over the next year to finalize the elimination process.

Performance-based funding still on the table for Manitoba universities