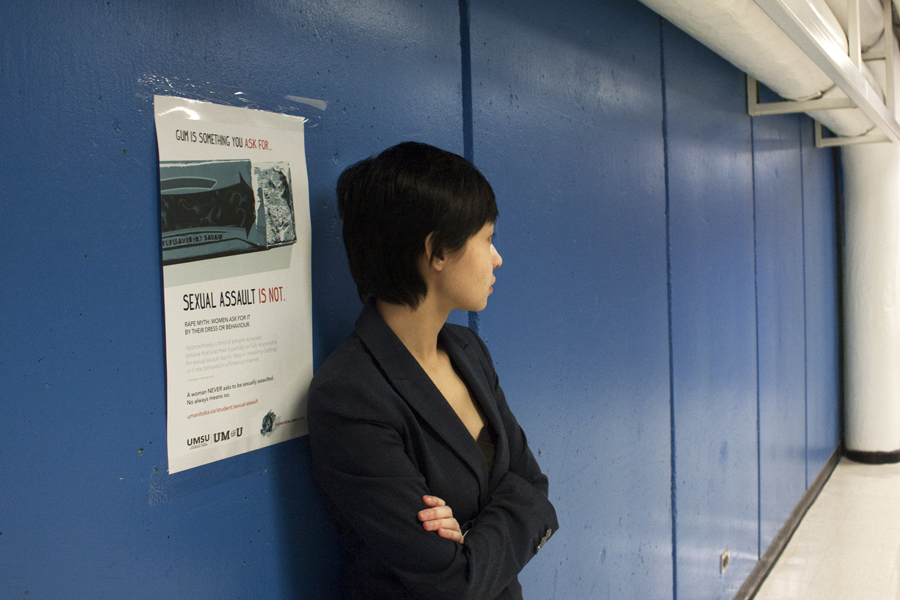 Newly posted #NoMoreBlurredLines campaign posters with the message “Gum is something you ask for, sexual assault is not,” intended to engage students at the University of Manitoba by acknowledging and critiquing rape culture on campus were vandalized with victim-blaming statements less than one week later.

The posters were put up on Oct. 9 throughout the University of Manitoba tunnels and buildings. The #NoMoreBlurredLines public service announcements featured an image of a pack of gum with rape myths and an expression to challenge rape culture on campus and in our wider society.

By Oct. 16 at least four posters were found to be defaced. The vandalized posters were tagged with messages like, “Then don’t dress like a skank” and “Ignorance is bliss ‘til you get raped. Dress smart!”

At least two of the various tags appear to have been written with a similar pen and in similar handwriting.

“I noticed the graffiti as I was walking through the tunnels,” said Wanda Hounslow, U of M sociology student. “At first I thought it was just the one [defaced poster], but when I continued on, I passed several more so I decided to pull them down.”

Hounslow is leading the new UMSU-supported campaign to address myths surrounding sexual assault and rape culture on campus under the banner of #NoMoreBlurredLines. The posters were originally developed over the summer for a project in sociology instructor Mary-Anne Kandrack’s class and were recently posted across campus to raise awareness as part of the #NoMoreBlurredLines campaign.

“[The project] meant to address the myth that ‘women ask’ to be sexually assaulted by the way they dress or act,” Hounslow told the Manitoban.

“Our society, culture, and media bombard women with the message that if they are to be valued, they must be beautiful, sexy, and alluring, and yet simultaneously blame women if they are raped or sexually assaulted for looking ‘too sexy.’

“By this same logic, male football players in spandex outfits—or the countless topless men that parade our Winnipeg streets on the warm days of summer—are also asking to be raped.”

Hounslow explained that this logic implies that men have no control or agency over their own sexual desires; that victims of sexual assault are to blame for their rapist’s behaviour; and that rape is a sexual act. Meanwhile she says that, “it is in fact an act of power and violence.”

Based on his newly proposed campaign position as part of his run for mayor, Robert-Falcon Ouellette, Winnipeg mayoral candidate and program director for the U of M Aboriginal Focus Program, spoke to the issue of sexual violence in our city and the vandalism on campus.

“Men need to be accountable and responsible for their own actions, and the remarks on posters show that people just aren’t taking [sexual assault] seriously,” said Ouellette. “It is always going to be an ongoing process of education and raising awareness.”

“I am saddened to hear that vandalism has taken place with regard to campaign materials produced by students, for students,” Rebecca Kunzman, UMSU vice-president advocacy, told the Manitoban.

“That the campaign has already received this backlash only proves how desperately we need to address the issue of myths and misconceptions surrounding sexual assault and the ways in which silence and rape culture contribute to gender-based violence,” said Hounslow.

Hounslow noted that she intends to contact UMSU and Security Services to inquire about “reviewing the videotape footage of the tunnels and making an official complaint.”

“Going forward,” Kunzman said, “students at the U of M can expect continued dedication and great work from the student leaders behind the campaign.”

“The first step is that [sexual violence] needs to be taken seriously,” Ouellette told the Manitoban. “It needs to be made a priority, and priorities need to be funded.

“In my plan for the city, we are putting resources into creating safe places so that if people find themselves in trouble, they know that can get safe.” Ouellette continued, “Many of these would also work on campus, and some are in place: awareness, safe spaces, effective enforcement. Everyone should have the right to feel safe on campus.”

“These incidents have only grounded my resolve, [and] serve as an example of precisely why campus rape culture needs to be addressed,” Hounslow said. “This is what rape culture looks like.”