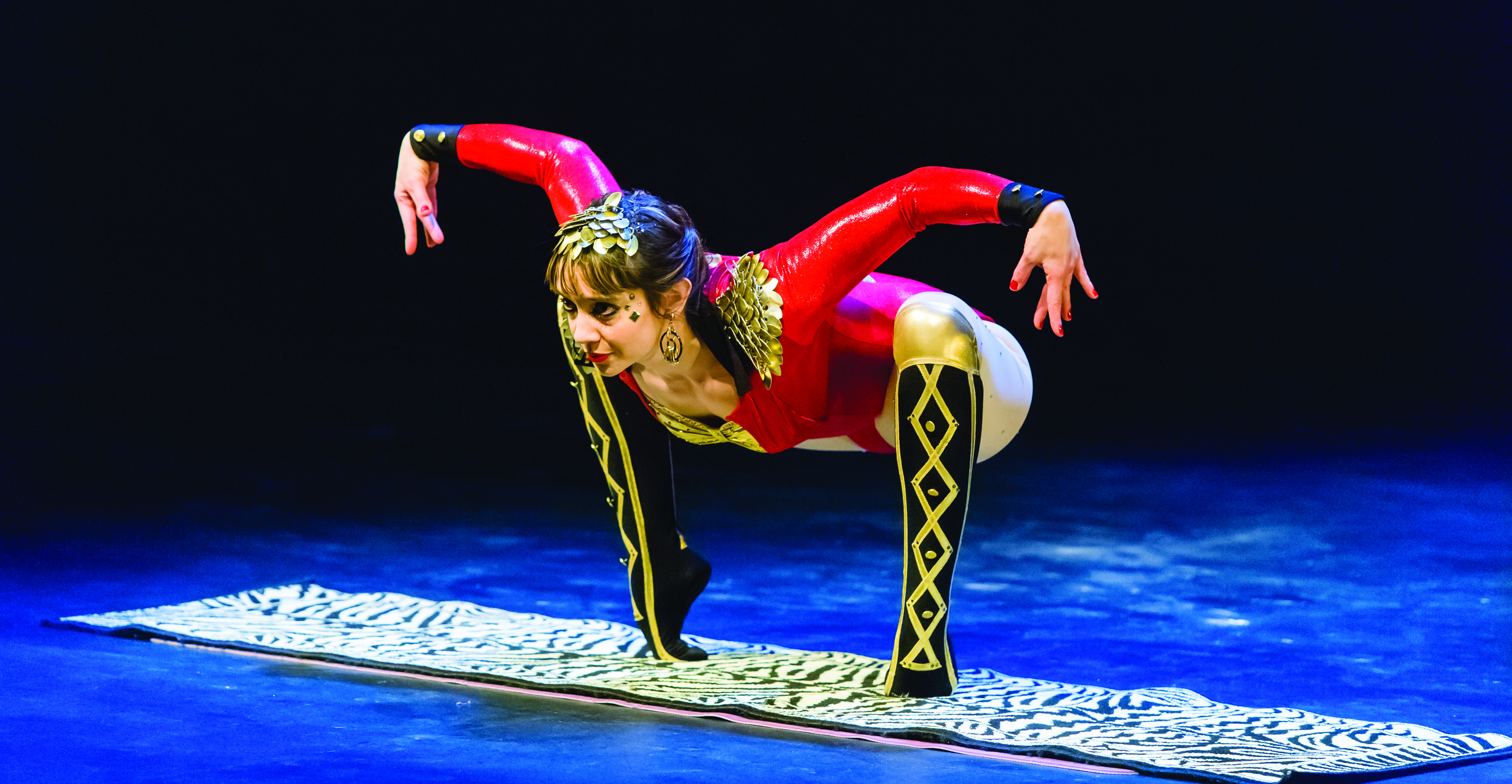 The days of the iconic Big Top may have faded into history, but that doesn’t mean the days of the circus are over. According to a contortionist, a sideshow performer, and a juggler who calls himself a “one-man-circus,” we are on the verge of a new circus movement in Winnipeg.

The building momentum was evident on Friday, Feb. 7, when 17 performers got together for a sold-out show billed as the Blacksmith’s Ball, held at the Gas Station Theatre. Produced by local contortionist Samantha Halas, the ball included a variety of acts and genres not often seen together on one stage, including a mime, two pole dancers, a bed of nails, kung fu, belly dancing, aerial hoops, physical theatre, impersonation, spoken word, and a live band.

The ringleader of this circus came in the form of a blacksmith, Ethan Radstrom. By trade, he is a ferrier—a kind of blacksmith who works specifically with horses—and it was through this work that he was first introduced to the circus.

His other passion is storytelling and spoken word, and Radstrom’s small vignettes about the backgrounds of the other 16 performers provided the common thread for the show, as well as some comedic relief.

Radstrom met Halas while working on another show, the Laughing Boneyard Follies. They recognized that there was enthusiasm for variety shows, and began to think bigger: “How can we pull these people together and do a show that’s maybe a bit larger than one or two acts performing to 50 people?” asked Radstrom.

As the idea came together, Halas began to collect performers. This was her first experience producing, and it was a challenge in the beginning.

“I think at first a lot of the performers didn’t even know if it was going to be a good show, so a lot of them didn’t quite trust me yet,” says Halas.

While she met a few of the performers through sharing other stages, many of the acts claimed one single place for their first contact with Halas: her contortion class. In addition to performing, Halas also teaches bi-weekly contortion classes, which are open to people from all walks of life.

Within the broad spectrum of circus, there are many smaller areas of speciality—acrobatics, juggling, and sideshow, to name a few—and while they hold shows with kindred performers, it has been rare for them to come together for a multi-genre circus show.

Natasha O’Reilly, trained as a fire performer and does a bed of nails act as well, is used to working with metal bands and pole dancers, but the Blacksmith’s Ball marked her first theatre show. “I think variety shows are really needed and really make theatre that much more fun,” says O’Reilly.

Like many of the other acts preparing backstage before the big opening, she was nervous, but felt the energy of the new community. This sentiment was echoed by belly dancer Accalia Carmen, who was “just excited to see everything come together, especially with the drama piece, the live music, it’s unlike a show that I’ve been a part of.”

Halas spoke to the challenges both of this segregation of acts in Winnipeg, and also of the lack of opportunities for performers at a certain level to give circus work their full attention. “[They] just give up because there’s nowhere to perform; you just train and train and train and nobody sees it. It’s kind of anticlimactic.”

She says that beyond a certain level, performers often have to leave Winnipeg if they want to work, which has been a hardship felt by the circus community for many years.

There is evidence of change, as many see growth in the circus community. Isaac Girardin performed plate-spinning, juggling machetes, devil sticks, and rola bola at the ball. He bills himself as a one-man circus, and heads up the Central Canadian Circus Arts Club.

Girardin has noticed more jobs, as well as a growing awareness of circus as both an art and a sport. “I think Winnipeg is on the cusp of something really cool,” he says.

Winnipeg is also not quite as small as we might see it, says Halas, and she is constantly discovering new people, new acts that she wants to incorporate into future shows.

If the Blacksmith’s Ball is any indication, the act of pulling these diverse performers together into one show is an essential step in fostering newer circus communities, and well-connected and enthusiastic performers and producers like Halas are key.

At the conclusion of the ball, thanking Halas, the Blacksmith spoke: “She’s been the hub of our wheel.”

From her many travels, Halas has big visions for what is being done elsewhere, and what circus can be, “and that’s why I’m so inspired to give people [ . . . ] an insight into that. It can keep getting better and better, and we don’t have to stay at this one level.”

While Halas is proud of the work she’s done getting the ball together, she doesn’t see herself as the sole mover and shaker in town. “I really hope it keeps going, and that it’s [ . . . ] self-perpetuating, that it doesn’t need one person to keep going, that everyone keeps putting things in to keep going,” she says.

There was a lot to learn from as well—in terms of having more help in producing and stage-managing, and offering a longer run rather than a one-night engagement—but as a first-time producer, Halas is confident that there is room to grow. “For us to make a circus culture here, we have to make our own path and cut our own obstacles down, you know?”

Despite the obstacles, it is clear from the response to the Blacksmith’s Ball that Winnipeg is ready for this kind of show. The ball sold out three weeks in advance, and Halas was bombarded by requests for tickets to the jam-packed 232-seat venue.

While the performers may hit the road to hone their various crafts, it is clear that in Winnipeg, the circus won’t be leaving town anytime soon.

Playing with each other

Why are you here?