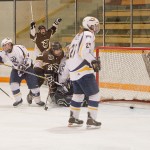 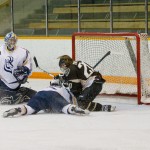 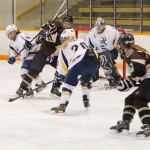 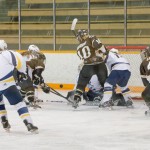 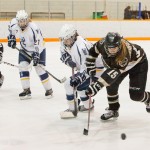 The Manitoba Bison men’s hockey team entered playoff action with their spirits high after clinching a home playoff berth the week prior. Their opponents, the Mount Royal Cougars, were making their first-ever Canada West playoffs appearance and gave the home squad everything they could handle. The Bisons showed tremendous resolve after losing game one, eventually taking the series 2-1.

Friday’s action featured a double overtime thriller with a combined 103 shots on net. Mount Royal came out of the struggle with a 3-2 win.

The Bisons dictated the pace through the first 10 minutes of play after two Mount Royal penalties. Once back at even strength, the Cougars surged and outshot Manitoba 14-9 in the period. Bison goaltender Joe Caligiuri stopped two tight scoring chances late in the first to keep the game scoreless after 20 minutes.

Relentless pressure from Mount Royal forced the Bisons to take a roughing penalty at 7:02 in the second. Just 12 seconds into the power play, Cody Cartier found the back of the net on a beautiful pass from Matt Brown to put the Cougars up 1-0. The visitors added to their lead at 9:58, as Tyler Fiddler flew down the left wing, going stick side on Caligiuri.

Bison rookie sensation Jordan DePape scored his first Canada West playoff goal off of a one-timer before the period ended. A number of huge stops by Caligiuri kept Manitoba in the game, including a glove save in close while falling backwards. Heading into the third, Mount Royal’s lead was cut to one.

The Cougars took a costly interference penalty with less than three minutes remaining in the third, and the Bisons pounced. After Caligiuri was pulled for a 6-on-4 advantage, Brendan Rowinski deflected a Taylor Dickin shot into the back of the net at 18:94, sending the game into overtime.

The first overtime settled nothing, as both goalies were outstanding. Manitoba appeared physically exhausted heading into double overtime. The Cougars ended things at 4:09, as Brenden Turnbull’s quick wrister slipped past Caligiuri, a heartbreaking finish for Manitoba.

Each net minder played sensational throughout, as Mount Royal’s Dalyn Flette stopped 46 shots for the win, while Caligiuri made 53 saves in a losing effort.

“We knew they [were] a physical, hard-working team, but it’s a playoff game,” said head coach Mike Sirant post-game. “You can’t get discouraged, though. We’ve got to find a way to score and find a way to win a hockey game.”

After playing the seventh-longest men’s playoff game in Canada West history, both teams were looking to shake off the fatigue the following evening. Despite a tough start, the Bisons emerged with a 4-2 victory to even the series.

The first period began at a sluggish pace. Mount Royal got on the board first, as Billy Marshall forced the puck underneath the leg of Caligiuri in a mad scramble at 6:11. The Bisons tied things up before the period ended, with Dickin scoring off of a great pass from DePape with just 1:01 remaining.

The Bisons—led by Darren Bestland, who was a force all weekend on the boards—picked up their physical game in the second period. The uptempo play led to a goal at 10:48, as Jesse Paradis flipped a loose puck in the crease over Flette’s shoulder for the 2-1 lead. Despite taking a five-minute major at 11:26, the Bisons stayed strong defensively and held onto their lead heading into the third.

Manitoba put the game away in the third. Ian Duval made it 3-1, following up on an Aaron Lewadniuk rebound on an odd man rush. Mount Royal stayed persistent and cut Manitoba’s lead to one on a 5-on-3 power play, but Dickin would secure the win, making no mistake on the receiving end of a cross-ice pass at 18:40, for his second goal of the game.

Caligiuri was firm between the pipes yet again, stopping 22 shots in the win, including two critical diving saves in the third.

Manitoba’s win set up a decisive third game on Sunday afternoon, where undisciplined play from Mount Royal and fast-paced play from Manitoba would eventually lead to a 2-0 series-clinching Bison win.

Manitoba threw 16 shots at Flette in the first, and eventually grabbed the lead at 9:53. Luke Cain finished off a long pass from Bestland. The Cougars managed just five shots, and were visibly outmatched throughout the period.

The Cougars showed urgency in the final 20 minutes, entering the Bison zone on a frequent basis, but were shut down by the Bisons’ stout defence, whose efforts ensured a 24-save shutout for Caligiuri.

Manitoba now advances to the Canada West semi-final, and will play on the road against Calgary in a best-of-three series this weekend.

The new era of NHL discipline

In the absence of body checking