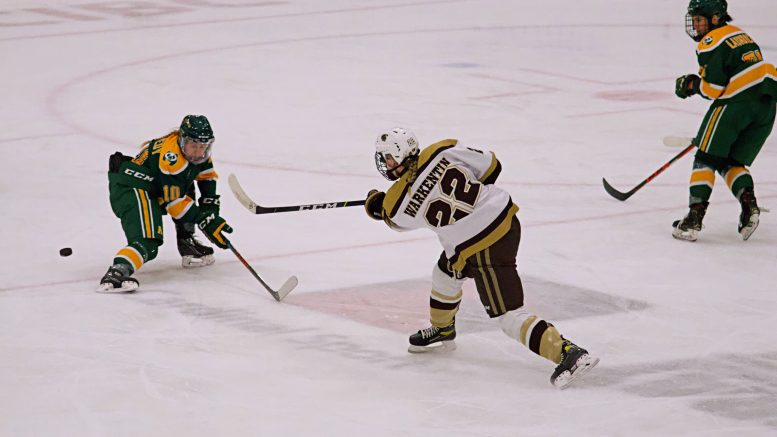 n March 3, the University of Manitoba men’s basketball team had its season cut short by the University of British Columbia Okanagan Heat in the first round of the Canada West basketball playoff tournament. Although the early elimination was disappointing, the announcement that Bison teammates James Wagner and Mason Kraus had been awarded for their exemplary play was a small consolation.

The only forward named a first-team all-star, Wagner was the herd’s primary weapon this season. The fifth-year player averaged 16.8 points per game, ranked fourth in Canada West in field goals as well as sixth in minutes per game averaged.

Defensively Wagner was also a force, ranking ninth in defensive rebounds and being a shutdown player all season.

When asked how valuable Wagner is to the Bisons, Kraus praised his teammate’s work ethic and leadership.

“James was a first-team all-star for a reason,” said Kraus.

“He puts his work in on and off the court. He was [our] key player this year and personally the best player I’ve played with. He carried us as much as he could this season and we wouldn’t even [have won] half the games we won without him.”

Named to the all-rookie team, Kraus was also one of the U of M’s best players this season.

As a true freshman, Kraus was a presence on the floor for the herd. Starting all 16 games for the herd, Kraus had the most assists and steals on the team and ranked third on the team in minutes played, blocks and points per game.

After having an excellent first season, Kraus says he is just grateful to be on a competitive team that pushes him every day to be his best. He is thankful for his teammates allowing him to grow as a player and as a person.

“I knew when I was committing to U of M, I would be able to show what I have […] and would be joining a team that will push me not just as a player but as a person,” said Kraus.

“My teammates were allowing me to go through some of the growing pains throughout the season and would make sure and help me understand what I need to do to improve. I felt that everyone had a voice this year, and not just seniors helping me but my fellow rookies helping me learn and telling me what they see.”

After having a disappointing playoff, the Bisons men’s basketball team will look to go even further into the post-season next year. Even though the Bisons will be losing graduating players Wagner, Keiran Zziwa and Risto Zimbakov, Kraus believes the herd will be a competitive team come fall. He said he is ready to step up and be one of the Bisons’ main scoring threats and points to a fresh group of first-year teammates that are ready to take Canada West by storm.

“I’m excited for next year. I know I have something to prove as being one of our main scoring options next year and our team, I think, can compete for a [Canada West] championship,” said Kraus.

“We have a lot of young guys in all positions and I know the work that we all put in will show why we are not a team to play with.”

The day before Wagner and Kraus won their awards, Bisons women’s hockey captain Lauren Warkentin was named a second-team all-star by Canada West.

This season, the blue-liner was a defensive stalwart for her team, playing the most minutes on her team and being an excellent puck mover in her own end. The oldest player on a team of mostly first and second-year players, the fifth-year defenceman’s leadership will certainly be missed. In 2018, she was a member of the Bisons women’s hockey team that brought home the first national championship in program history.

Warkentin wasn’t the only Bison hockey player to be honoured in the announcement — teammate Ashley Keller was named to the conference all-rookie team. In her first season as a Bison, Keller notched six goals and five assists, good for third in Canada West rookie scoring. She will be a key player on the women’s hockey team for years to come.

A week later, a pair of Bison volleyball players received recognition for exemplary freshman seasons. Katreena Bentley and Spencer Grahame were each named to the Canada West all-rookie team.

In her first year as the Bisons’ setter, Bentley had a historically significant season. She led the nation in assists per set with 10.53, a stat that ranks eighth all time in Canada West history. After the women’s volleyball team went winless in the first round of pool play, Bentley will look to carry her squad deeper into the post-season in 2023.

Since joining the team, Grahame has been one of the Bisons’ most productive players. Playing on the left side, Grahame has been efficient on offence, ranking second on the team with 2.45 kills per set and third in total attacks with 345. He has also been effective defensively, racking up 29 blocks and 61 digs. Hosting the U Sports men’s volleyball championship March 25 to 27, Grahame and his teammates will look to capture the program’s 11th national title.

Wagner, Kraus, Warkentin, Keller, Bentley and Grahame join an impressive list of Bison athletes that have been awarded by Canada West within the last six months.

In late October, women’s soccer player Bianca Cavalcanti was named to both the Canada West all-rookie team and second-team all-stars.