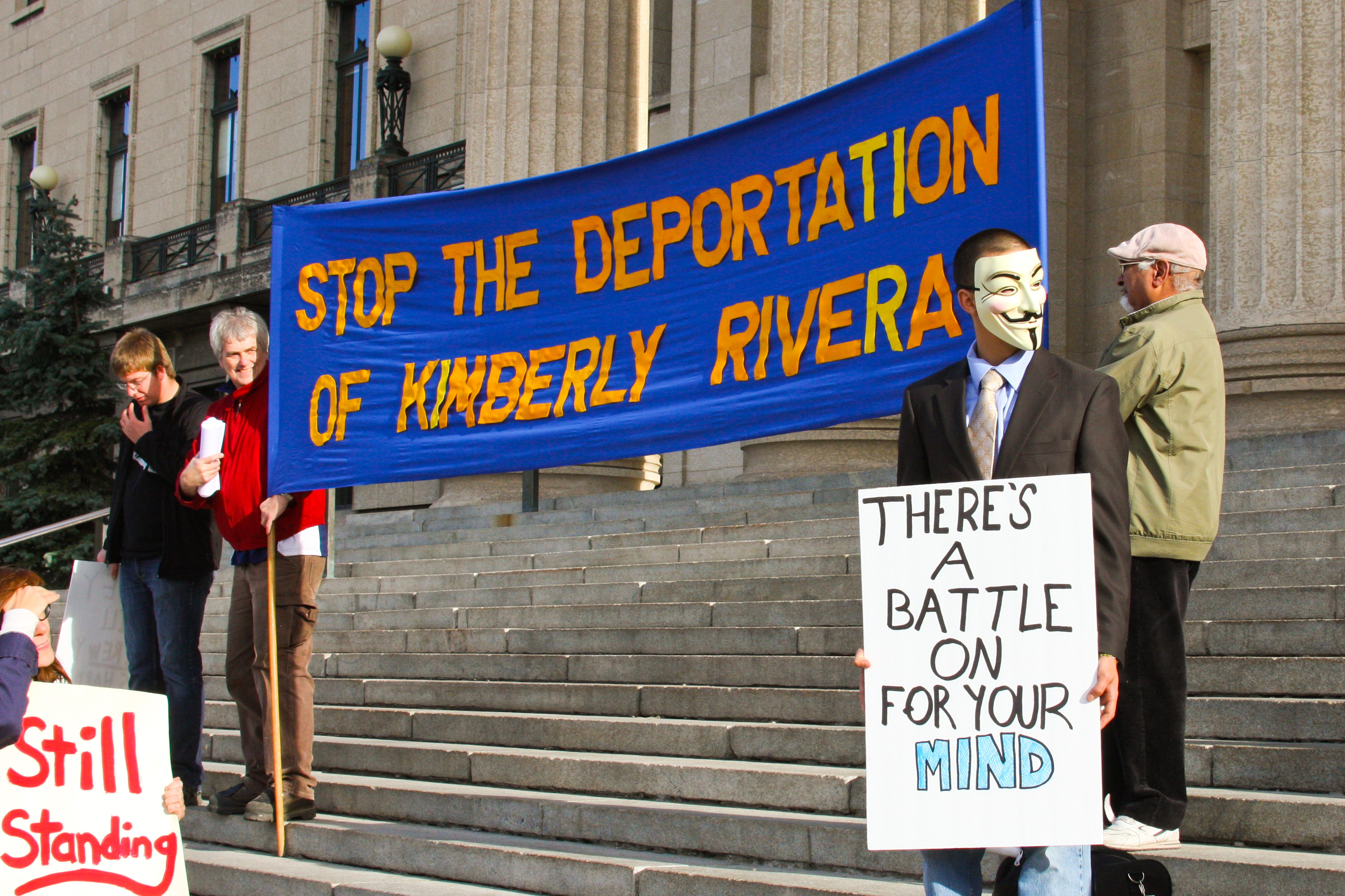 Monday, Sept. 17 marked the one-year anniversary of the Occupy Wall Street movement as well as the commencement of the fall session in Parliament. Several activists groups in Winnipeg took that opportunity to voice their distain towards the current state of the Canadian government at the “Take Canada Back” event.

Approximately 100 protesters gathered at the Legislative building to object the Conservative government. The event featured speakers including Jean Palmer (Fair Vote Canada), Glenn Michalchuk (Peace Alliance Winnipeg) and Mouhammed Ammoumou (Canadian Federation of Students), each focusing on a different aspect of the government that they opposed.

Pamela Godin, an organizer of the event­­ explained that the movement has one goal – to get Stephen Harper out of office.

Godin said that they were calling for Canada to return to values they describe as being truly Canadian – that everyone in Canada would be taken care of and free to do what they want and that the government would be completely transparent.

When asked how this movement affects students, Godin argued that Harper is instituting corporate tax cuts rather than putting those funds towards services, such as education.

Palmer spoke at the rally and urged fellow protesters to sign a petition asking for a reform in Canada’s political system into proportional representation. This would assign legislature seats to politicians proportional to the actual strength of votes they receive.

Palmer argued that voters in Canada aren’t apathetic but, rather, feel that their vote does not count and therefore do not bother to vote.

The Canadian Federation of Students Manitoba (CFS–MB) was represented at the protest by the chair, Mouhamed Ammoumou.

Ammoumou explained that their presence at the protest was due to their firm stance on public service cuts. He said that CFS–MB would continue to attend these protests until the government recognizes that public services are important to Canadian society.

“CFS Manitoba will continue to support causes that affect our students, and we will attend these events to ensure our voices are not made silent,” said Ammoumou.

CFS–MB plans to continually lobby municipally, provincially and nationally by bringing forth concerns of students to the political bodies. If the lobbying fails, peaceful protests and rallies will occur.

Michaelchuck focused on the deportation of Kimberly Rivera during his speech.

Rivera is a war deserter from the United States. She escaped to Canada and applied for refugee status. The Canadian government rejected her application and she was deported back to the U.S. Rivera was taken into custody and may face a sentence of a year in military prison.

“[Rivera’s] only crime is that she has stood up and said that the war that she was asked to fight in [ . . . ] was an immoral and unjust war,” said Michaelchuck.

He argued that the militarism of Canada strikes at the heart of the social injustices globally.

Michaelchuck said that Canada has, in the past, accepted war deserters (during the Vietnam war, for example). Now, according to Michaelchuck, the Harper government is going against the will of the Canadian people that want to support individuals who choose not to fight in wars.

After the speeches the protesters began their march, which started peacefully but turned controversial when the police arrived, ending in an arrest.

According to a police statement, officers arrived at the march on Portage Avenue, ordered the protesters to march on the sidewalk and attempted to identify a leader.

The police statement held that they were in the midst of an effort to take a member of the protester group into custody when they were swarmed.

“As I saw how aggressive the police were being with the young black man originally targeted as the “leader,” I went over and told the police officer [ . . . ] that I was the leader. Moments later, the police had apprehended another man and focused on him, letting me go,” said Louis May, a participant of the protest.

A man who was handcuffed collapsed and experienced convulsions. The Police formed a circle around the convulsing man, denying that a taser was used.

A statement from May argues that the incident was a direct result of the force and aggression that the Police used when they arrived on the scene.

“The protester appeared to be having a seizure and yet no police officer administered basic first aid, nor would they allow a nurse in who presented herself.”

Ammoumou explains that what can be seen from this incident is that standing up for a cause is often seen as hostility, which he says is never the case.

Fight for $15 and Fairness launches in Manitoba

Five Days for the Homeless surpasses its own expectations