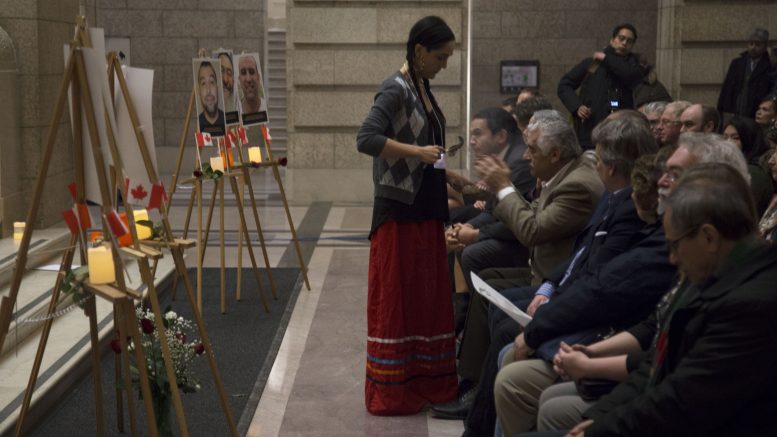 A commemoration was held to honour the victims of the Quebec City mosque massacre on Jan. 29th at the Manitoba Legislative Building.

Members of the Muslim community and the general public gathered Jan. 29 at the Manitoba legislature to commemorate the Quebec City Mosque shootings which took place one year prior.

It was attended by St. Vital councillor Brian Mayes, who represented Mayor Brian Bowman, Rochelle Squires, minister responsible for francophone affairs and status of women, and Wab Kinew, leader of the Manitoba NDP.

A flower-laying ceremony, held to honour the lives lost in the attack, was followed by attendees observing a moment of silence.

Squires took to the podium and reminded the audience about the importance of standing in solidarity in the face of acts of violence.

“I believe that if we can come together and show our solidarity against Islamophobia, we are ensuring that their lives were not taken in vain,” she said.

“And in order for us to ensure that acts like this do not prevail, we have to stand in solidarity together.”

Squires said that being a Manitoban is synonymous with being multicultural, and part of this involved citizens freely exercising their right to freedom of worship.

The event was brought to a close with group singing and drumming and a candle lighting ceremony in honour of the victims.

Shahina Siddiqui, president of ISSA, said acts of Islamophobia are nothing new.

“It’s been going on as we’ve seen the worst of it since 9/11, and it’s getting worse,” Siddiqui said.

This was “one of the worst massacres in recent history and Canada – that fear and hate and racism against Muslims – this was the ultimate expression of it.”

Siddiqui said the commemoration was an opportunity to take collective action against Islamophobia.

“It should not be the responsibility of the Muslim community alone to address it, but it should be and must be the sole responsibility of every Canadian [. . .] because as I have often said, hate and violence against one Canadian is [hate] against all Canadians.”

She also criticized the biased representation of the issue by what she called the mainstream media, especially the reluctance to describe the attack as an act of “terrorism” even though the crime fits that description. Siddiqui said such reluctance is absent when the perpetrators have a “Muslim-sounding name,” and their actions are quickly termed “terrorist acts.”

Speaking on the government’s response in the wake of the shootings, Siddiqui said that although politicians have shown strong concern, government officials must take authoritative action to combat Islamophobia, and specifically called for the designation of Islamophobia “as an official form of racism.”

She said for that to happen, it will take proactive action from the community.

“Democracy is only as good as its citizens are active, and if we become complacent, we’re not going to bring a change.”

Investing in the future