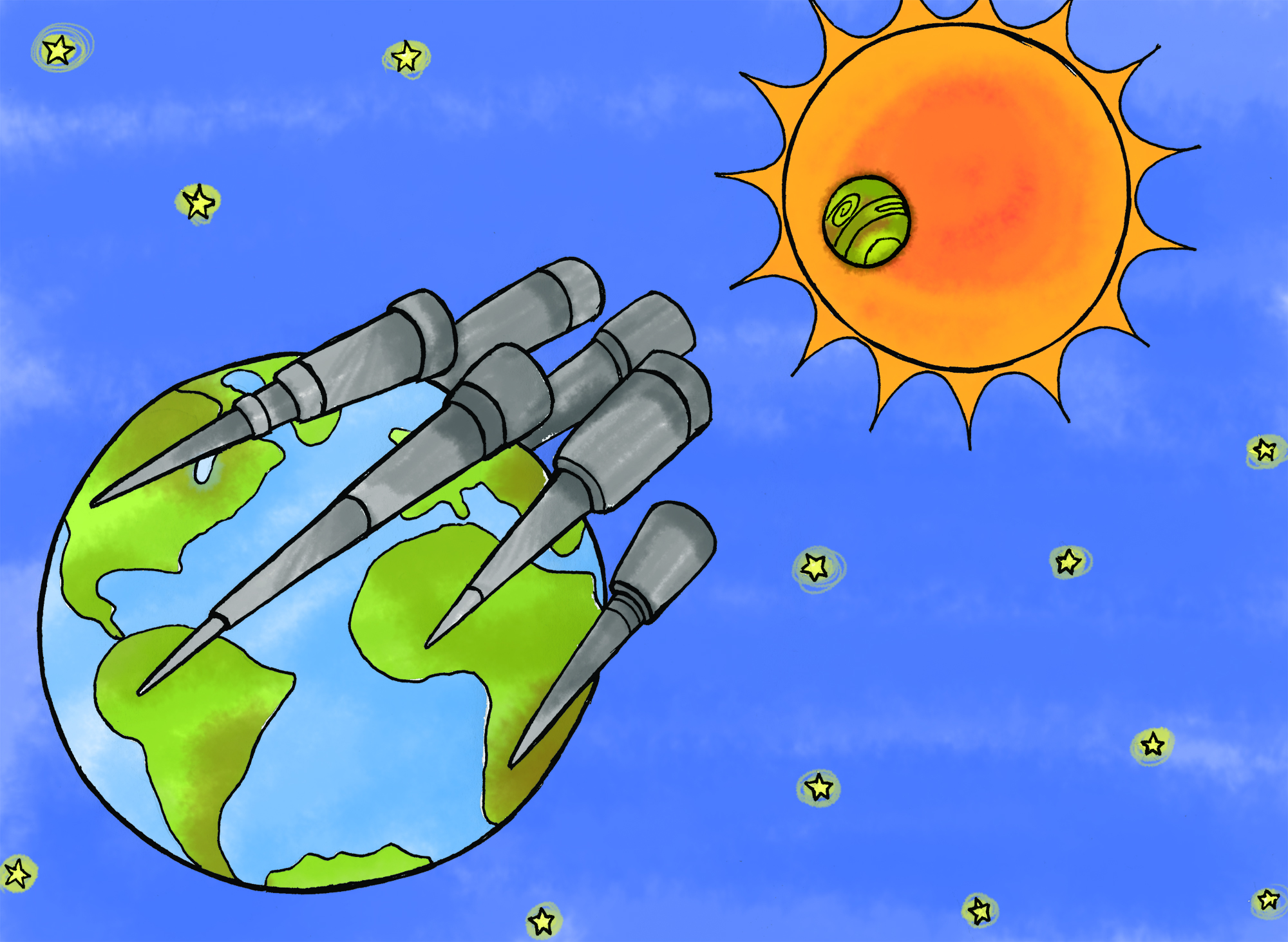 On June 5, stargazers watched as Venus, our nearest planetary neighbour, passed directly between the Sun and Earth. During this rare astronomical event, known as a “transit of Venus,” Venus was visible from Earth as a small silhouette moving across the much larger surface of the Sun.

This was the last chance for humans alive today to experience a Venus transit; although the last transit was in 2004, the next one won’t occur until 2117.

“Every 100 years or so there are two transits, eight years apart,” remarked Heather Matheson, a graduate student from the University of Mantioba’s physics and astronomy department.

The orbital dynamics of Earth and Venus are responsible for this strange but predictable pattern.

“The orbit of Venus is tilted 3.4 degrees relative to the Earth’s orbit,” said Matheson. “If we look from above at the solar system, each time Venus catches up to and passes [the Earth], it appears as though Venus is located along the [same orbital plane] as the Earth and the Sun.”

Matheson went on to note that, from the point of view of Earth, “with the orbital tilt, if we look from the side we usually see that Venus is actually above or below the Earth’s orbit. From Earth we see Venus pass either above or below the Sun. Though on rare occasions, when the alignment is just right we see Venus pass directly in front of the Sun, [a transit by definition].”

To mark the rarity of this event, public observation sessions were organized across Canada And Winnipeg was no exception. Over 600 individuals joined astronomers to witness the transit at the University of Manitoba’s Ewan Observatory. At least 2,000 more, myself included, gathered at Assiniboine Park where the Winnipeg Centre of the Royal Astronomical Society of Canada (RASC) hosted an observing session open to the public.

Indeed, the popularity of this year’s transit has been extraordinary. “Given that it is quite hard to observe, the media/public interest has been remarkable,” commented David Tindall, professor of astronomy at Dalhousie University. “My own view is that it must have to do with the rarity of the event … and the fact that no-one alive will see the next one. Halley’s comet has the same kind of effect … with its 76 year [cycle], there’s only one chance in a lifetime to see it.”

For Dave Chapman, current editor of the RASC’s Observer’s Handbook, and Roy Bishop, professor emeritus in the department of physics at Acadia University and a graduate of the University of Manitoba, this once in a lifetime experience was not to be missed — rain or shine. Residing in Nova Scotia, both Chapman and Bishop were clouded-out during the 2004 transit. With poor visibility and weather conditions forecasted once again forNova Scotiadays prior to the 2012 transit, Chapman and Bishop evaluated their options:

“When it became apparent that the weather was almost certainly going to be awful in Halifax, I had a decision to make: stay home and be grumpy, or find a place where the sky was likely to be clear, and go there at the last minute,” said Chapman.

“During the week prior to the transit I looked at the weather reports for Halifax, Toronto, Thunder Bay, Winnipeg, Calgary, and Vancouver,” recounted Bishop. “Winnipeg had, by far, the best likelihood of clear skies on June 5.”

So Winnipeg it was. Both Chapman and Bishop joined the crowd and fellow RASC members at Assiniboine Park where they saw, through clear skies, Venus travel across the face of the Sun for the last time this century.

This last transit was only the eighth to occur since the invention of the telescope in 1609 and only the seventh to have ever been observed. Although infrequent, these observations have provided important contributions to the field of astronomy.

“Historically, the transit was important in determining the size of the Solar System” said Tindall.

During the 18th century, Kepler’s Laws had enabled astronomers to calculate the relative distances between planets in astronomical units, or A.U. (one astronomical unit being equivalent to the distance between the Earth and Sun). However, the absolute value of the A.U. could not be obtained by these same methods.

“The solution was to observe another body (Venus) from different points on the surface of the Earth, using parallax to infer the Earth-Venus distance [and subsequently the Earth-Sun distance],” explained Tindall.

Following this recommendation, in the late 18th century, dozens of expeditions around the globe set out to observe and document the phenomena of the 1761 and 1769 transits, in what is known as the “first large-scale scientific endeavor,” reports RASC. The most famous of these expeditions involved Captain James Cook’s voyage to Tahiti in 1769, where the location of his observation is still known today as Point Venus.

Incidentally, an expedition was sent to Hudson Bay, where the 1769 transit was observed by British astronomers, William Wales and Joseph Dymond at FortPrince of Walesnear Churchill, Manitoba.

Today, transits of Venus are still of scientific importance. More recently, for example, transits of Venus are helping astronomers develop techniques for studying the atmospheres of planets. There are current studies testing whether or not we can learn about Venus’s atmosphere by measuring the variation in light emitted by the Sun during a transit.

Jessica Lockhart is a graduate student in the faculty of Natural Resource Management at the University of Manitoba.

More than the sum of its parts

The rare breed of winter cyclist

2 Comments on "Transit of Venus attracts crowds across Canada"