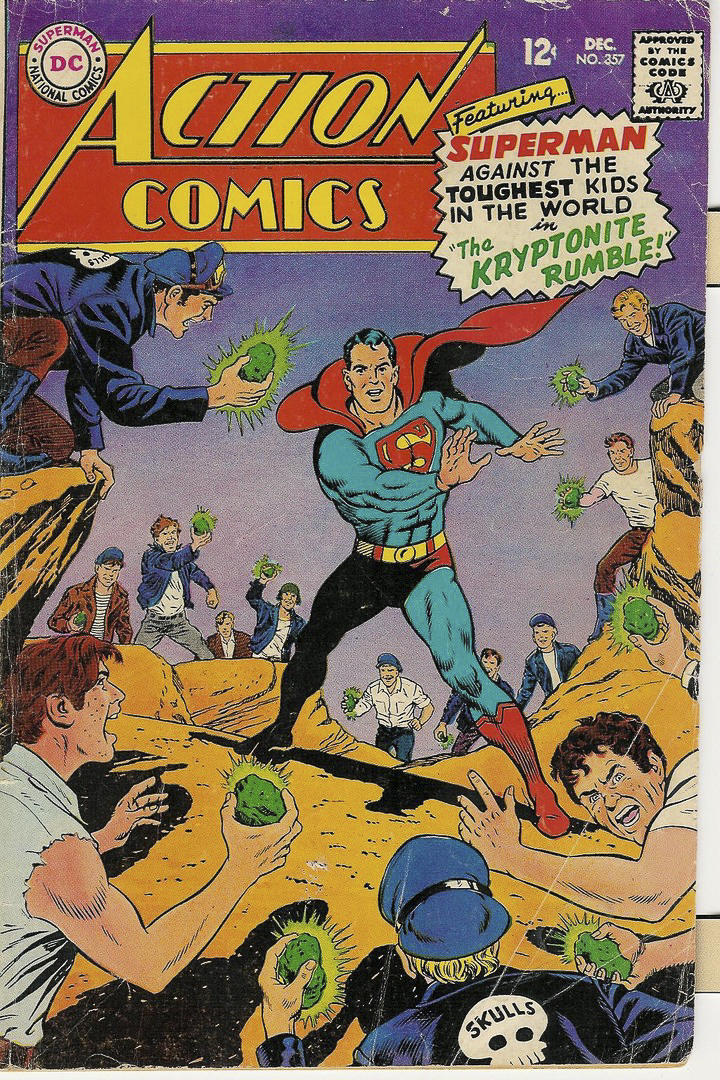 5. Million dollar investments
Perhaps one of the most commonly known facts about comic books is that very old ones tend to be worth a lot of money.
Although the label on the cover advertises a ten-cent cost, the first issue of Action Comics (the first appearance of Superman) has been known to sell for well over US $1 million. Similarly, in recent years the first appearance of Batman from 1939 (Detective Comics No. 27) has also sold at auction for more than a million dollars.
Just know that if you’re waiting for your own comic books to skyrocket in value you may be waiting for the better half of 100 years before anything approaches the stratosphere of these two high watermarks.

4. Comic books vs. funny books
Around the beginning of the 20th Century the term comic became much more common in use throughout the United States. Largely due to the fact that people recognized consecutive panel drawings from newspapers as “funnies” or “comic strips,” the term comic became synonymous with the art form now known as the comic book. Although many early comic books were essentially collections of these comedic newspaper clippings, today the term has adopted a bit of an anachronistic feel — some artists actually prefer the name “graphic novel,” eschewing the notion that their work is meant to be either light or funny.

3. From meager beginnings
Now some of the world’s most recognizable characters, both Spiderman and Superman experienced some rough times in the early goings.
Former Marvel head Martin Goodman once famously told Stan Lee that Spiderman was a rotten idea for a comic book hero. Goodman thought the character would ultimately flop because of the fact that people generally hate spiders.

Superman, on the other hand, was originally envisioned by creators Jerry Siegel and Joe Shuster as a bald telepathic villain hell-bent on world domination. A re-imagined, more heroic, interpretation of the supernatural character would take the duo a harrowing six years to find a publisher.

2. “Super-hero” trademark
For decades now the term super-hero has been trademarked by both DC and Marvel, a joint venture by the two companies to prevent any other business from using the word to sell products such as comic books, magazines, playing cards, action figures, notebooks and costumes.

The unlikely marriage of the two companies came as a result of the fact that neither DC nor Marvel would have been able to file the trademark on their own as they would have to prove that consumers thought exclusively of either one brand or the other when using the term “super-hero.” More reasonable was that both companies, together, had cornered the market of the superhero and that, combined, they deserved the exclusive trade market of the super-hero.

What this means is that to this day you will not see the word “super-hero” used to sell or market any product outside of DC or Marvel, pending some seriously unsavoury litigation.

1. No sex, no monsters, no triumph of evil
Formed in 1954 in response to the fear that comics posed a threat to American culture, the Comics Code Authority (CCA) was given the task of imposing a standard code of ethics for the comic book industry.

Similar to the Hollywood Production Code of the time, the CCA prohibited the use of overt violence, gore, sexual content or innuendo. In time the CCA added further provisions such as the complete banning of vampires, werewolves and zombies from all regulated comics. Publishers were also strictly forbidden from using the words “horror” or “terror” in the titles of their comic books.
Among the most restrictive of all Comics Code Authority edicts were those that prohibited the ways in which stories could actually unfold; no police officers were permitted to die as a result of criminal activity, no public officials or members of respected institutions could be disrespected and, above all else, good must triumph over evil in every instance.

Today the CCA is effectively defunct, a relic of a different era in comic publishing. The majority of comic distributors, including Marvel and DC, have opted instead to police their content through their own regulatory system.

U of M takes part in waste reduction week