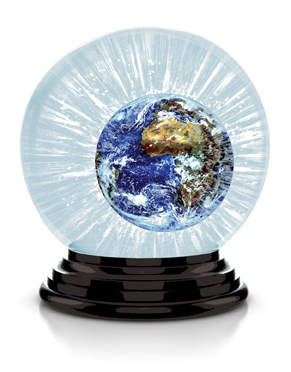 Don’t take my word for it, check out this list of some of world’s worst predictions, courtesy of theweek.com:

“The growing gentleness of mankind will abolish, as barbarous, games which take the form of modified assault, as football, boxing, wrestling, fencing, and the like.” — T. Baron Russell, A Hundred Years Hence, 1905

“With over 50 foreign cars already on sale here, the Japanese auto industry isn’t likely to carve out a big slice of the U.S. market.” — BusinessWeek, 1968

“Who would pay for a message sent to nobody in particular?” — Associates of David Sarnoff, telecommunications pioneer, on his interest in the radio, 1920s

“The only thing different is the hair, as far as I can see. I give them a year.” — Musical director of The Ed Sullivan Show, predicting the failure of the Beatles, 1964

“I believe that the motion picture is destined to revolutionize our educational system and that in a few years it will supplant largely, if not entirely, the use of textbooks.” — Thomas Edison, 1922

“By the year 1982, the graduated income tax will have practically abolished major differences in wealth.” — Irwin Edman, professor of philosophy, Columbia University, 1932

“I predict the Internet will soon go spectacularly supernova and, in 1996, catastrophically collapse.” — Robert Metcalfe, founder of 3Com, 1995

“Planes carrying 1,000 passengers and flying just under the speed of sound will of course be old hat. The new thing will be transport by ballistic rocket, capable of reaching any place on earth in 40 minutes.” — TIME, offering predictions for the year 2000, 1966

“In a decade, urban dwellers will have to wear gas masks to survive air pollution . . . By 1985, air pollution will have reduced the amount of sunlight reaching Earth by one half.” — Life, 1970

“For some years now, there has been promise of a large flat TV screen which would hang on the wall like a picture . . . [but it’s likely] we shall never see such a system in operation.” — Science writer and influential BBC broadcaster Arthur Garratt, 1978

“Of all the nations, [Germany] is probably the least corrupted by the lust of conquest.” — Boston Daily Globe, 1901

“The abdomen, the chest, and the brain will forever be shut from the intrusion of the wise and humane surgeon.” — Sir John Eric Ericksen, appointed Surgeon-Extraordinary to Queen Victoria, 1873

“Adhesive tape will be strong enough to take care of all household repairs [by the year 2000].” (maybe on the Red Green Show – S.F.) — British physicist Desmond King-Hele, 1975

“It will be years — not in my time — before a woman will become prime minister.” — Margaret Thatcher, who went on to become Britain’s prime minister, 1974

“The trip from suburban home to office will require a few minutes only. A penny will pay the fare.” — Ladies’ Home Journal, “What May Happen in the Next Hundred Years,” 1900

“You have a chip on your tooth, your Adam’s apple sticks out too far, and you talk too slow.” — Universal Pictures executive, rejecting would-be actor Clint Eastwood, 1959

“The concept is interesting and well-formed, but in order to earn better than a ‘C,’ the idea must be feasible.” — A Yale University management professor, on a paper by Fred Smith proposing reliable overnight delivery service, 1960s. Smith went on to found FedEx in 1971.

“There’s no chance that the iPhone is going to get any significant market share. No chance.” — Steve Ballmer, CEO of Microsoft, 2007

“There will never be a mass market for motor cars, about 1,000 in Europe, because that is the limit on the number of chauffeurs available.” — Spokesperson for Daimler Benz, date unknown

“To believe that Apple can somehow succeed where all others have failed is to ignore some fundamental realities of tablet computing.” — Randall C. Kennedy, IT consultant and former InfoWorld contributor, on Apple’s iPad, 2009

“Ours has been the first, and doubtless [will] be the last, to visit this profitless locality.” — Lt. Joseph Ives, botanist and explorer, after an expedition to the Grand Canyon, 1861

“Fooling around with AC electricity is just a waste of time. Nobody will use it, ever.” — Thomas Edison, a proponent of DC (direct current) electricity, 1899

“New Coke [will be] the most significant soft drink development in [the] company’s history . . . the surest move ever made.” — Roberto Goizueta, chairman of The Coca Cola Company, 1985

“With your voice, nobody is going to let you broadcast.” — CBS news producer and 60 Minutes creator Don Hewitt to Barbara Walters, 1958

“Sean Connery can’t play the sophisticated James Bond. He looks like a bricklayer.” — Producers of the first 007 film, Dr. No, 1962

“Preempt Doris Day? Are you out of your mind?” — CBS network president Bob Wood, rejecting an offer to air Monday Night Football, 1970

“President Truman appears to be the only American who doesn’t think Thomas E. Dewey will be our next president.” — New York Daily News, one of many publications convinced that Truman would lose the upcoming election, 1948

“Houses will be able to fly [by 2000] . . . The time may come when whole communities may migrate south in the winter, or move to new lands whenever they feel the need for a change of scenery.” — Futurist Arthur C. Clarke, Vogue, 1966

As you have read, some pretty smart people made most of these predictions. So the next time you make a bad prediction, or something doesn’t turn out as you expect, don’t feel too bad. You’re in good company.

Fairtrade coffee, a great way to make a difference

Death in the age of social media