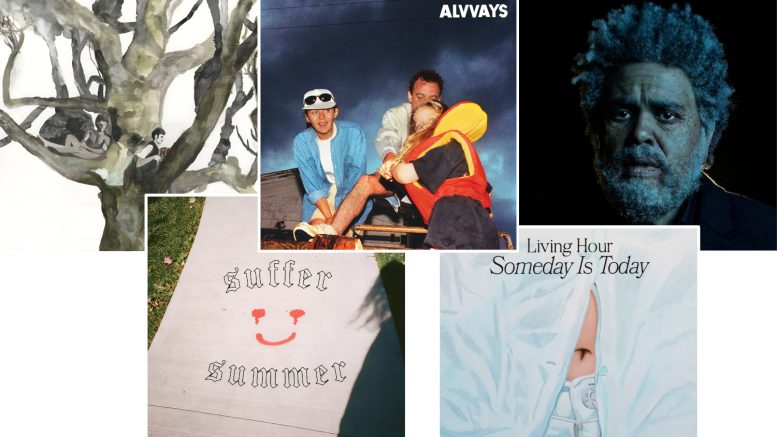 Alvvays has reclaimed its rightful spot as indie-pop royalty. Since its first record in 2014, the band has pumped out perfect pop gems at a frustratingly slow pace. Blue Rev comes after an excruciating five-year gap, but any wait would be worth it for an album like this — 14 perfect songs that somehow get more perfect the more you listen to them.

Each song has such a strong base — beautiful, wide vocal melodies matched with clever, observant lyrics. And Alvvays keeps building on top, piling on ingenious instrumental parts, perfectly timed key changes, bridges that cut through like rays of sunshine and little blips and melodies that appear for a second, then disappear. It’s breathtaking songwriting and an absolute masterclass in craft and production.

Fellow Canadian super producer Shawn Everett’s mix is pitch-perfect, with constant little details that boggle the mind but never distract from the neatly built songs at the core. It’s a magic trick of an album, a rare alchemic accident, an incandescent bright blue potion that rockets you out of time like the sugar-rush alcopop that gave the album its name. Drink it up.

The Weeknd is probably the best living pop star. In a world of sleepy pastiche peddlers, trend-chasing TikTok phenoms and washed-up hangers-on, the Weeknd is one of the brave few really pushing forward. And nowhere is that more apparent than on his admirably ambitious album Dawn FM.

Reuniting with experimental electronic darling Oneohtrix Point Never, we are led through a dance mix presented by the official radio station of the purgatorial afterlife, Dawn FM, hosted by none other than Jim Carrey.

This is another case of a great songwriter and performer flexing his muscles. Abel Tesfaye pulls from ’80s synth pop, ’90s Eurodance, modern R&B and house seamlessly, without ever indulging in imitation. And the hit rate over the 16 tracks is remarkably high, especially in the sterling opening sequence from “Gasoline” through “Sacrifice.”

The so-called pop-punk revival is still limping along after a couple years of relevance. Pop artists like Olivia Rodrigo and Machine Gun Kelly have embraced the sounds of ’00s stars like Avril Lavigne or blink-182 by making the music even more poppy and artificial. However, Chastity grasped the real object of pop-punk on Suffer Summer, fusing together classic power pop and actually edgy punk music with style.

Project mastermind Brandon Williams managed to make an album both harrowingly honest and effortlessly catchy, with songs so sugary that you don’t notice that you’re swallowing some truly bitter pills. Like on “Happy Face,” a song about a friend’s overdose death that somehow still goes down like an ice-cold Coke on a hot summer day.

Someday Is Today marked a big leap forward for Winnipeg’s premier indie rock band. After two albums of solid but uniform dream pop, the band leaped out of its previously defined patterns to deliver an album of varied and consistently excellent pop and rock songs.

These songs run the gamut from fuzzed-out rock to gentle instrumentals to woozy, steadily building guitar pop, introducing whole new worlds of texture and structure to the band’s already gorgeous sound. And somehow, even as the band expands to new genre frontiers, it always fits perfectly and never feels like trying on a costume. When Living Hour returns to its signature dreamy sound, it is deeper and more breathtaking than ever.

Dan Bejar is a journeyman musician, a real standard-bearer of Canadian indie. On his 13th album, LABYRINTHITIS, he once again demonstrates his constant restlessness and increasing wiliness in his middle age.

The album can be seen as a synthesis of some of Bejar’s previous adventures, mixing the herky-jerky, uncanny electronics and dry, surreal humour of 2020’s Have We Met with the smooth, glammy sound of albums like Kaputt or Poison Season.

But in that synthesis, Bejar arrives at something completely new and exciting. From the hypnotic opener “It’s in Your Heart Now” to the heartbreaking closer, aptly titled “The Last Song,” Destroyer offers up some of his most elusive songwriting paired with some of the tightest and catchiest arrangements of his long and varied career.

SubCity Dwellers are getting back together for one weekend only