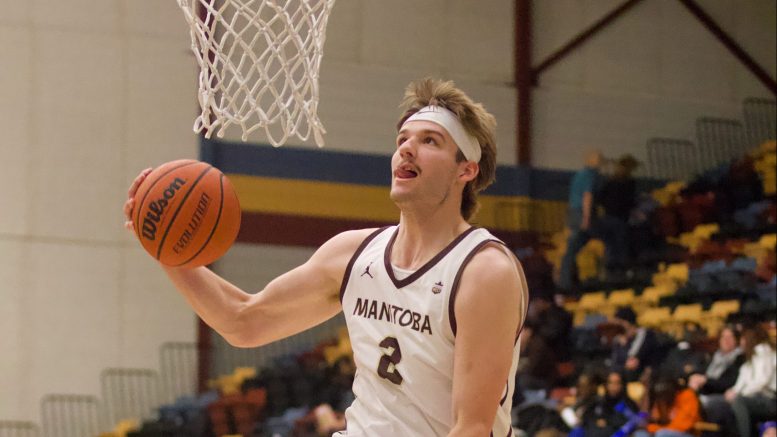 The U of M men’s basketball team collected two convincing victories this past weekend
against the Mount Royal University Cougars, improving their record to 13-1 on the season.

They now sit alone atop the Canada West (CanWest) standings.

Bison first-year forward Simon Hildebrandt was, and is, a big reason why.

Hildebrandt’s most notable play over the weekend came in the third quarter of Saturday’s
game when he drove a vacant lane and threw down a vicious one-handed slam, posterizing
Mount Royal’s Keivonte Watts and electrifying the home crowd.

When asked about how he stays confident under pressure as a rookie in a tough
conference like CanWest, Hildebrandt responded, “when I’m playing, I just lock in.”
“I don’t think about anything else around me,” he said. “I just focus on my shot, and it’s the
same shot every time.”

The Bisons’ defence also stood tall over the weekend, holding the Cougars to 68 and 80
points respectively in the two games.

“We pride ourselves on our team defence,” Hildebrandt said.

In fact, the Bisons held CanWest second leading scorer Holt Tomie of the Cougars below
his usual average of 23.8 points per game.

When asked how the team planned on stopping Tomie, Hildebrandt said, “we’ve got to
make sure it’s not just one guy guarding him, it’s all five.”

Needless to say, the team executed its gameplan in exemplary fashion, forcing Tomie into
many highly contested, fadeaway jump shots, and seldom letting him penetrate into the key
for an easy layup.

Boasting a shimmering 13-1 record, the U of M men’s basketball team is now in sole
possession of first place in the CanWest conference, a game up on the second place
University of Victoria Vikes, breathing down the Bisons’ neck at 12-2.

When asked about what being in first place meant to the team, Hildebrandt was quick to
draw attention to the plethora of local talent that the team possesses, making their rise to the
top more meaningful.

Hildebrandt said that the team’s chemistry enables it to function well as a unit.
“We all have the same goal,” he said. “We all want to win, a lot.”

With the best record in CanWest three weeks before the start of the playoffs, Hildebrandt
said that the team has grown in confidence.
“We’re kind of at the point where we’re like, ‘we’re good, we’re really good, we can do this
now,’” he said.

Hildebrandt firmly believes that the team has what it takes to succeed at nationals.
“The way we’ve been playing this season, we can definitely win it now,” he said.

The last time the Bisons won the U-Sports men’s basketball National Championship was
in 1976.

Before the team can win Nationals, though, it has to get there. To do that, it needs to win
its CanWest semi-final matchup, should it make it that far.

The team isn’t getting too hasty, though. Hildebrandt said they’re going to take the
remainder of the season “one game at a time.”

Students thinking of attending a game should do so, as they’ll be treated to excellent,
entertaining basketball — especially if the team can go on a deep playoff run.

The next home games for the herd are Jan. 27 and 28 as they play host to the MacEwan
University Griffins.