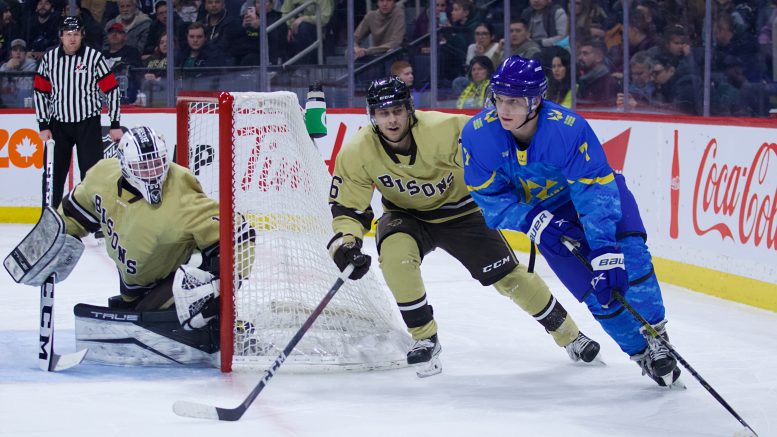 The University of Manitoba Bisons welcomed the Ukrainian U25 Men’s National Team Monday night, with Winnipeg, Man. being the last stop of the four-game tour.

Canada West teams consisting of the University of Alberta Golden Bears, Saskatchewan Huskies, Manitoba Bisons and Calgary Dinos have played host in the “Hockey Can’t Stop Tour” — a friendly tournament that started off in Saskatchewan on Dec. 30 and ended in Manitoba on Jan. 9.

Each university played one game against the Ukrainian U25 Men’s National Team, with all profits from ticket sales going toward relief and charitable funds to Ukrainian grassroots organizations in Canada and toward humanitarian causes in Ukraine.

With more than 7,000 tickets sold for Monday’s game and with 4,000 Ukrainian refugees attending, the turnout for the Bisons’ leg of the tour was quite successful.

When the Russian invasion of Ukraine began last year on Feb. 24, some Ukrainian professional hockey players left hockey behind to serve their country. Arenas in the Donetsk, Kherson, Luhansk and Zaporizhzhia Oblasts — provinces of Ukraine — have also been destroyed due to shelling.

Though, the Ice Hockey Federation of Ukraine is determined for the sport to remain despite the less than ideal circumstances. The federation has continued to play with six teams competing in its national championship.

With most men between the ages of 18 to 60 in Ukraine expected to serve in the general mobilization of the country, it is a rarity for these young men to be able leave Ukraine.

The idea of the team coming to Canada came about through communications between TSN play-by-play commentator Gord Miller and representatives of the Ice Hockey Federation of Ukraine after the Ukrainian U25 team qualified for the 2023 International University Sports Federation (FISU) World University Games held in Lake Placid, New York from Jan. 11-24. Miller’s contacts in the National Hockey League and U Sports, as well as various sponsors, eventually turned a chance for the Ukrainian squad to practice into the four-game western Canada tour.

The Ukrainian U25 team was even recognized Sunday evening at the Canada Life Centre with a puck drop before the commencement of the Winnipeg Jets game.

Monday’s hockey game on Jan. 9 against the Bisons men’s team, concluded the Canada West tournament, and the Ukrainian U25 team will go on to partake in the World University Games.

This tour gave the herd an opportunity to play an international game with the intent to gain experience from a different roster of players. The hope is to establish a better, lasting hockey relationship between Ukraine and Canada.

The Ukrainians dominated from the drop of the puck, scoring twice in the first and second period and taking a 4-0 lead into the third frame. Bison forward Devon Skoleski would score early in the third to take the shutout from Ukrainian goaltender Dmytro Kubrytskyi. Two minutes later, Ukrainian forward Mykhailo Simchuk would score his second goal of the night. The Ukrainian team would go on to win 5-1.