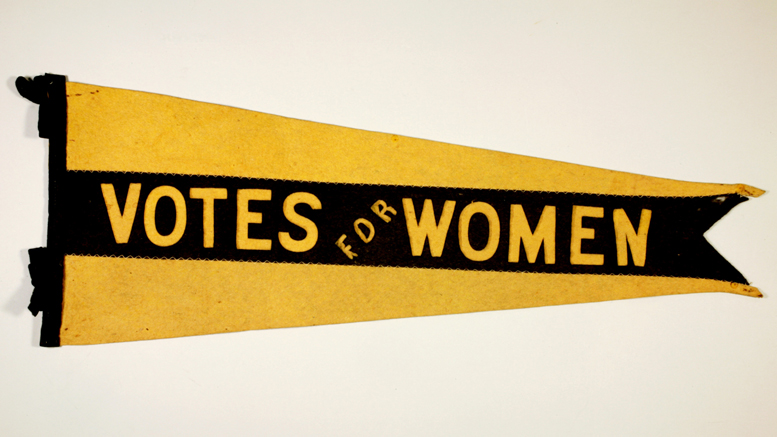 Photo provided by the Manitoba Museum.

On Jan. 28, 1916, Manitoba became the first Canadian province to extend voting rights to some women. This marked a significant advancement in the ongoing struggles for women’s rights.

To mark the 100th anniversary of the event, the Manitoba Museum is hosting an exhibit called Nice Women Don’t Want the Vote from now until April 10. After time on display in Winnipeg, the exhibit will tour around the province, then go into the Canadian Museum of History.

In 1914, popular Manitoban writer, politician, and social activist Nellie McClung led a delegation of male and female suffragists to the Manitoba Legislative Assembly to make one simple thing clear: Women have every right to vote.

McClung had been involved in several social reform movements in the early parts of the 1900s and on that day, she spoke her piece against the provincial government.

“Have we not the brains to think? Hands to work? Hearts to feel, and lives to live? Do we not bear our part in citizenship? Do we not help build the Empire? Give us our due,” McClung asked of those assembled.

Sir Rodmond Roblin, the Manitoba premier, quickly dismissed her argument. His counter-argument expressed the common view and attitude that settlers at the time had about women and politics – women were perceived as being gentle, guileless, naive, and altogether too sensitive to be voters or politicians.

“Most women don’t want the vote,” Roblin said in retort.

“The mother that is worthy of the name and of the good affection of a good man has a hundredfold more influence in shaping public opinion around her dinner table than she would have in the market place, hurling her eloquent phrases to the multitude.”

For Canadian suffragists, the battle (but not the war) was won two years later when non-First Nations women were given the rights to vote in provincial elections in Manitoba. Other provinces soon followed suit.

It should be noted that many suffragists remained silent in regards to the voting rights of indigenous women at the time. It was not until the passage of John Diefenbaker’s Canadian Bill of Rights in 1960 that First Nations women were allowed to vote.

The Manitoba Museum’s Nice Women Don’t Want the Vote exhibit – titled after the crux of Roblin’s counterargument – is a thoroughly detailed showcase of the events of the early suffragist movement. It highlights the “who, how, when, and why” of the successes and failures of the movement.

This exhibit presents the inequalities early suffragists sought to address, provides an objective perspective of the causes and opposition of the movement, and celebrates pioneering women’s suffragists such as Nellie McClung, Winona Margaret Flett Dixon, Ella Cora Hind, and Margaret Benedictsson.

The display includes official letters written by these women, as well as possessions and items they had used during their demonstrations and delegations.

The most exciting and interesting component of the exhibit is an interactive audio section, which includes oral recordings of early suffragists. There is also a detailed timeline of salient events in the Canadian suffragist movements to date.

Last November, Prime Minister Justin Trudeau introduced a completely gender-balanced cabinet as part of one of his campaign promises. This is the sort of progress the suffragists would likely have sought after, and although there is still much to be done, it’s a cause to celebrate nonetheless. Revel in some Canadian history and visit this exhibit.

For ticketing information and hours of operation, visit www.manitobamuseum.ca or call 204-956-2830.

Every idea has its place