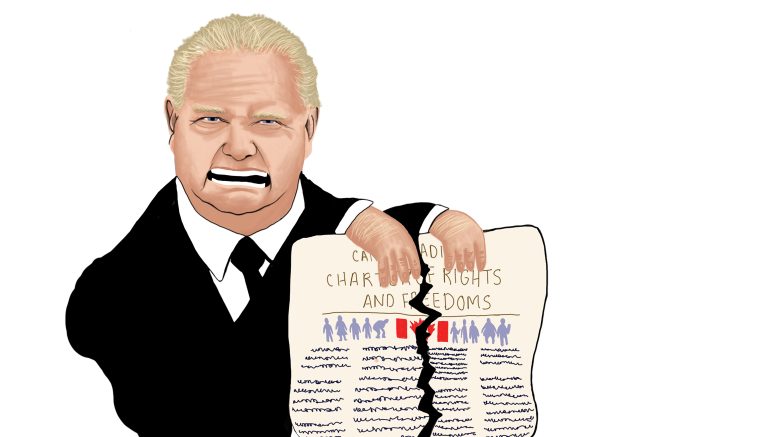 A strike mandate was approved by 96.5 per cent of the 55,000 workers represented by the
Ontarian School Board Council of Unions.

The council demanded a wage increase of $3.25 an hour per year, equal pay for
temporary and casual workers, improvements to vacation time and benefits, paid prep time
and violence prevention training.

However, education unions were mandated back to work because of Bill 28, legislation
created by the administration of Ontario Premier Doug Ford. Coercively titled the “Keeping
Students in Class Act,” the bill was an effort to force workers to accept a contract despite the
union-approved strike action and mediation.

Not only was the bill abhorrent on a moral level, but it also tried to ignore fundamental
Canadian rights and freedoms. As laid out in an explanatory note from the Legislative
Assembly of Ontario, Bill 28 is “notwithstanding sections 2, 7 and 15 of the Canadian Charter
of Rights and Freedoms”.

“Notwithstanding” means that the bill invoked section 33 of the Charter of Rights and
Freedoms, which allows for provincial governments to create legislation that would operate
in spite of certain sections of the charter.

The sections that Bill 28 intended to sidestep certainly made it problematic. Section 2(c) of
the Charter ensures the right to peaceful assembly, section 7 guarantees the right to life,
liberty and personal security and section 15 establishes equality and equal protection under
the law.

Bill 28 tried to invoke a clause to ignore all of these rights. Further fuelling this abuse-of-
rights fire is the fact that the Supreme Court of Canada ruled the right to strike as
fundamental in 2015. While a legally complex issue, this bill was very arguably an abuse of
Canadians’ rights through legal loopholes.

Following the introduction of the bill came massive backlash from organizations across the
province.

However, on the morning of Nov. 7, Ford announced that the government would repeal Bill
28 after the fierce opposition from education workers. This blatant abuse is indicative of the
government’s underlying opposition to the labourers of Ontario and the labour movement in
general.

The law also would have set a dangerous precedent for labourers across the country, as it
could have emboldened other provincial governments to simply overrule strike action and
impose unjust contracts onto labourers.

This is especially relevant in Manitoba, as last month the Winnipeg CUPE Local 500 was
facing strike action. In addition to CUPE Local 500’s recent potential strike action, there was
last year’s education strike by the University of Manitoba Faculty Association. If legislation
such as Ontario’s Bill 28 passed in Manitoba, the provincial government may have forced
contracts and a return to work on both organizations.

This is the state of labour relations in our country. Because of anti-labour legislation,
unions and labourers in Ontario were forced to put themselves in harm’s way through strike
tactics that were made illegal.

How can labourers hope for a fair deal when their own governments are willing to force
contracts on them without fair negotiation?

The fallout from the Ford administration’s actions, which earned the wrath of unions and workers
alike, has yet to be seen in full. As with all union affairs, we can only hope that the workers get a fair
deal for all their effort.

I am not the label you place on me