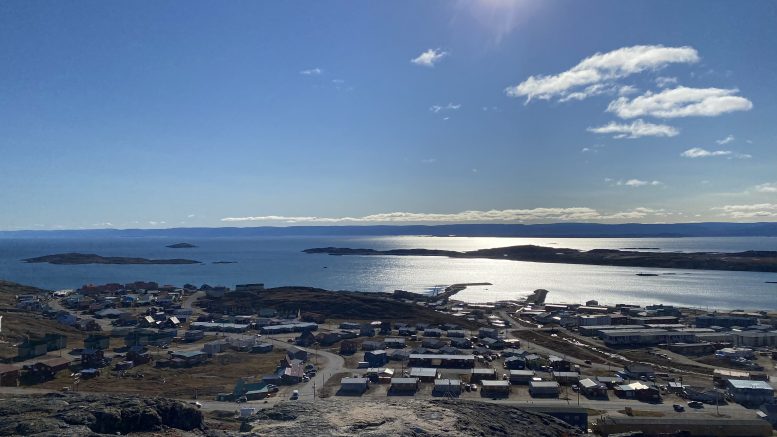 Over the past six weeks — and for the next six and a half months — I have embarked on
a co-op work term placement through the faculty of architecture in Iqaluit, Nunavut as a
facility planner with the territorial government.

As the title suggests, I help with the planning stages of all government-owned and
operated facilities throughout Nunavut. This includes, but is not limited to, assisting with any
new builds being constructed or existing buildings that require renovations, and providing
feasibility studies or business cases on how to approach or prioritize any facility
requirements within the other branches of government.

Throughout my brief time here, I must say that this area is truly its own little corner of the
world. It certainly offers similarities to other southern Canadian communities, but the
paradigm shift in the culture is immediately noticeable and quite pleasant in its own way.

Right off the bat, one of the major differences I noticed was the local dialect and language.
Unlike most of the other Canadian Provinces and Territories that have French and English
as official languages, Nunavut has Inuktitut as one of its official languages as well, which is
perhaps the most prevalent.

Everything from signage to public communications are first listed in Inuktitut, then English
and then French. Occasionally there is the inclusion of a fourth language, Inuinnaqtun,
another local dialect spoken in certain communities.

The territory of Nunavut was established in 1999 with the implementation of the Nunavut
Land Claims Agreement, an unprecedented achievement which allowed the Inuit culture to
establish their own independent government.

As a result, Inuit culture is strongly embraced throughout Nunavut. They have done well in
combatting the effects of colonialism and maintaining their cultural and governing
independence within the largest landmass in Canada.

As per the territorial government, all its decisions are founded upon and informed by the
eight guiding principles of Inuit Quajimajatuqangit (Inuit traditional knowledge):
The first is Inuuqatigiitsiarniq, which is “respecting others, relationships and caring for
people.”

The second is Tunnganarniq, or “fostering good spirits by being open, welcoming and
inclusive.”

Third is Pijitsirniq, which means “serving and providing for family and/or community.”
After that is Aajiiqatigiiniq, which translates to “decision making through discussions and
consensus.”

The fifth guiding principle is Pilimmaksarniq or Pijariuqsarniq, which means “development
of skills through observation, mentoring, practice and effort.”

Sixth is Piliriqatigiinniq/Ikajuqtigiinniq, or, “working together for a common cause.” Qanuqtuurniq follows, which means “being innovative and resourceful.”

Finally comes Avatittinnik Kamatsiarniq, which translates to “respect and care for the land,
animals and the environment.”

The local geography of Nunavut is quite vast, rocky and dry. It’s very desert-like — aside
from the snow, of course. There is little to no noticeable vegetation of any sort that grows
here aside from some small shrubs and grasses.

Though, what the region lacks in vegetation it makes up for with picturesque views of its
bays and northern lights, which can be seen on almost any clear night so long as you’re
away from town lights.

As thrilling as it is living in Iqaluit, the community and surrounding territory do not come
without downsides.

I suppose one of the greater social issues I’ve encountered while living here is the lack of
accessible and higher-quality education.

That’s not to say that there isn’t education provided throughout Nunavut, certainly there is.
But after having talked with many locals, it seems as though a lot of the people working in
higher-paying, more specialized jobs were able to achieve such positions having gone “down
south” — as many Nunavummiut refer to it — to complete their high school and post-
secondary studies.

One of the major factors propagating this issue is the sheer cost of building in the Arctic.
There’s no available infrastructure to provide accessible transit or delivery to Nunavut
aside from ship access and small air runways, especially in the northernmost communities. Therefore, all the building materials have to be flown in or transported by cargo ship — if the
waters have not yet frozen for the winter.

These high costs also affect daily commodities. Due to the complicated shipping
capacities, groceries can easily be at least three times more expensive than anywhere in
the southern provinces. Additionally, rent, water, power and fuel are all priced higher than
other provinces.

Quite frankly, it’s a miracle anyone can afford to live here.

As a result of the difficulty getting funding and planning in place for new and updated
builds, the timelines for actual completion are greatly increased.

This unfortunately has a great impact on communities that require these new facilities and
programs, and further irritates many of the existing social issues already prevalent such as
homelessness, poverty, addiction, inaccessible education and healthcare, among many
others. Simply put, it creates a vicious cycle.

That being said, the territory of Nunavut is still young and in its early stages compared to
elsewhere in Canada, and the strides made thus far have been effective, to a degree, as
well as unprecedented.

I have the utmost confidence that with continual symbiotic efforts from both the community
and the government, and a strong emphasis and consideration placed on Inuit values, an
effective territorial evolvement is in the works.

In time, I believe that Nunavut will one day be a thriving Arctic hub on the world stage.

Re: A tale of two parties