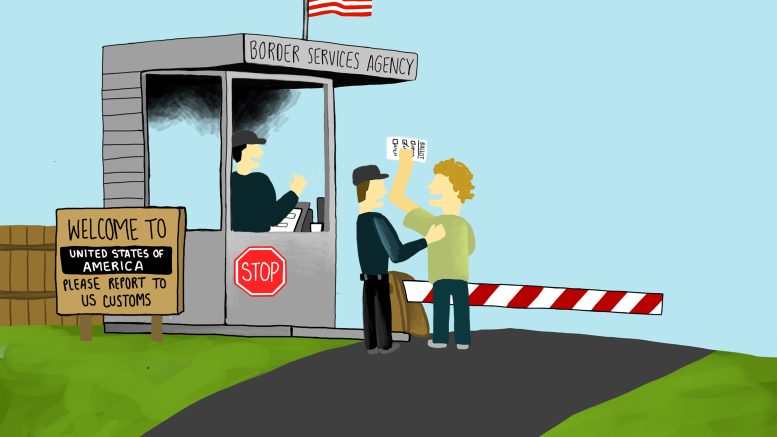 I’ve noticed how invested Canadians are in U.S. politics, and how that investment has
turned to involvement.

I have a foot in both camps. I am American and Canadian, and have lived in Canada the
last six months. Since being in Canada, I have heard and cared more about U.S. politics
than when I lived in the U.S.

It makes sense. More than 90 per cent of Canadian residents are living within about 160
kilometres of the U.S.-Canadian border, and it seems like many Canadians have relatives
living in the states or who hold citizenship in both countries.

Currently, rights concerning autonomy, 2SLGBTQIA+ communities and diversity are all
being put into question. And then there is the recent presidential campaign announcement
from former president Donald Trump.

I am concerned about all of these things, and I think I have every reason to be. Though, all
I can personally do in my position is vote. I did and I will again in every future election.

However, Canadians have been taking U.S. matters into their own hands. Back in 2020, a
Quebec woman was accused of mailing a poison known as ricin to then-President Trump.
Ricin can kill humans within hours of exposure. The woman is also facing 16 charges for
attempting to send this poison to Texas officials.

More recently, a Canadian-born man is facing charges of elder abuse, assault and
attempted kidnapping after a violent attack on Paul Pelosi, the husband of then-U.S. House
Speaker Nancy Pelosi. The assault left him hospitalized for several days.

These attacks are not just on a single party. Trump belongs to the Republican party and
Pelosi is a Democrat. These events don’t change anything about the political climate in the
states, they only hurt individual people. Republicans and Democrats will both continue to
produce legislation that can harm the country.

Why are Canadians so invested in the states? Canada has more important things to worry
about beyond the U.S. political landscape.

Canada is facing issues involving equitable housing, policing and addiction, to name a
few. These issues are present in the immediate life of Canadians, and I am sure that each
and every one has a connection to one of them whether we are aware of it or not. And those
things are just the tip of the iceberg.

But then again, I do see why Canadians are concerned with what goes on in the United
States.

The U.S. and Canada serve as key allies to each other. They have an enormous trade
relationship, and they share a border and environmental ecosystems. I understand how the
U.S. serves as the perfect case study for a multitude of historical, sociological, political and
economic concepts.

A large portion of Canadians also worry about U.S. democracy — something I resonate
with — and what its current state and tenuous future will mean for Canada.

I feel like the states and Canada have an almost older-younger sibling power dynamic — a
“the U.S. did it, so why can’t we” type of relationship. I do understand the global interest in
U.S. politics, I just believe that meddling in the politics of other countries is dangerous and
ineffective.

If you are eligible to vote in U.S. politics, do it, locally and federally. As a U.S. citizen, you
can inspire legislation, call your representatives regarding important issues, sign petitions,
and lobby to make your voice heard. If you’re Canadian and want a hand in U.S. politics,
support people from the states, encourage them to vote and help spread correct information.

Absolutely nothing good will come from violently trying to take matters into your own hands.

It takes a village