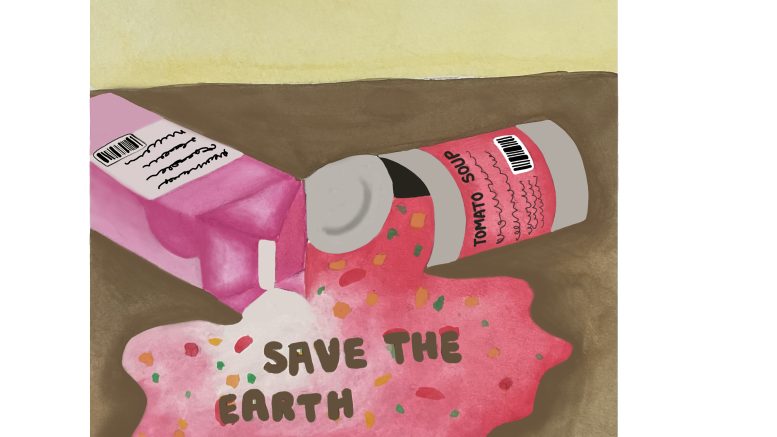 It has been a busy two weeks for liquid foods, which unexpectedly shot up in popularity as
the weapon of choice for climate and animal activists alike.

Heinz tomato soup was the catalyst that caused two Just Stop Oil protesters to make
international headlines, after the product was poured on Vincent van Gogh’s 1888
“Sunflowers” painting at the National Gallery in London on Oct. 14.

This stunt was a response to the U.K.’s cost of living crisis and a denouncement of the use
of fossil fuels. The protesters were arrested following the incident, and the painting was
cleaned and brought back for display six hours later.

Similarly, Animal Rebellion protesters have spilled milk on the floors of supermarkets in
the U.K. multiple times in the last few months to voice their opposition of dairy products due
to their significant contribution to environmental pollution.

Both these protests were met with a series of different reactions, from support to
confusion, to outrage and irritation. Is every protest a good one just by virtue of taking place
and garnering attention? I don’t believe that to be the case. Protests without definitive goals
of advocating and promoting reform are nothing more than short-lived placeholders for news
outlets until the next big story.

I must admit that these actions are effective at starting discussions, grabbing attention and
putting an organization’s name in the public eye, but that is all they do. Often times their
intended purpose is just performance, and less individuals are likely to support these types
of protests. I believe that winning the support of individuals is essential for change,
especially regarding the maintenance of our shared planet.

Fighting climate change is different from previous social movements. It will have an
inescapable negative effect on every inhabitant of the Earth if not dealt with quickly and
properly. This is important, as many Western people tend to have individualist views that
manifest themselves in the centring and importance of oneself. Therefore, unless a cause
directly affects Western people, it is unlikely that many of them will care all that much about
it.

Climate change benefits no one. It will negatively affect every single living being on this
planet. That is, unless you count the nice weather days before the polar ice caps melt and
potentially flood every major coastal city. At least the weather will have been nice for some
time.

With that being said, we should always be in solidarity with global social movements for
change and especially for climate action, and the fact that we aren’t is not a good sign.

Fighting climate change is not a one-man job. We all need to collectively adapt and
participate in sustainable and environmentally friendly behaviour to ensure the possibility of
many tomorrows. If we are not all in agreement and do not develop new behaviors, habits
and lifestyles, the time we have to bring about real social change will pass and all of our
efforts will be for nothing.

The climate crisis is a ticking time bomb, with a detonation time that can be either sped up
or slowed down.

It is vital to obtain public support for climate change efforts in order to implement corporate
and governmental policies that will help the environment. More effective non-violent protest
tactics that are aimed at the source of the problem or those with the power to change it are
necessary in order to do this.

We can continue to raise awareness but I would assume that everyone within a 20-meter
radius of Wi-Fi is aware of the climate crisis. Especially considering that scientists predicted
and warned about the effects of climatic changes in the atmosphere as early as 1896.

Although I commend these activists for their valiant actions and strongly support their
cause, it does not exempt them from constructive criticism.

Real reform is urgently needed, and getting everyone on board and winning the public
over is our best chance of success. It is not enough to stage protests that generate attention
than about the actual problem at hand.

It is in everyone’s best interest that we all globally support and mobilize for climate action
by doing the work ourselves, and by electing climate-aware politicians that can put
regulations in place to protect our planet. If we fail in that, our home will cease to exist.

Women in the sciences: Hall of fame