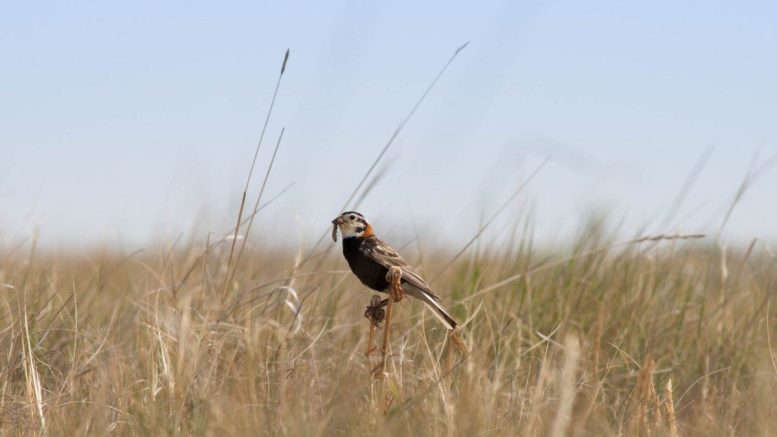 We need to rethink the way we regulate noise pollution from oil rigs as the noise from oil drilling can be harmful to prairie songbirds, including species that are at risk. These findings come from a new study authored by Nicola Koper and Patricia Rosa. Koper is a professor at the natural resources institute at the University of Manitoba and Rosa is an assistant professor at St. George’s University. They both study how human activity can interfere with songbird behaviour.

“I’m really interested in the impacts of anthropogenic noise on birds and […] the ways that they have to compensate for that,” said Rosa.

Anthropogenic noise is caused by any human activity that wouldn’t naturally occur and includes traffic noise and the urban noise of a city.

Grassland songbird numbers have declined drastically in the last 40 years, the most out of any group of birds. Many factors have contributed to this decline, including habitat destruction to make room for agriculture. Anthropogenic noise pollution can worsen these effects.

The researchers wanted to determine how oil rig noise could impact the surrounding prairie songbirds and whether there was a need for conservation interventions.

While sound is relatively easy to control as a factor of the environment, there are significant challenges in studying its impacts, making it important to isolate specific variables.

One of the challenges was to isolate noise from other factors, like pollution emitted from oil rig operation. To replicate the sound of an oil well, Rosa and Koper built a solar-powered playback system that would reproduce the sounds of oil infrastructure. Dummy versions of the system that did not make any noise were also built to observe the effects of the infrastructure alone.

The researchers then broadcast noise recorded from oil rigs over the sound system over the course of the birds’ breeding season and repeated their experiments over two years. Two types of noise were recorded from oil rigs. The first was recorded during daily operations at a rig, when machinery is continually being operated. This noise was broadcast 24 hours a day for a period of roughly 90 days.

The second type of noise was recorded during the drilling of a well. This noise was also broadcast 24 hours a day, but over two shorter 10-day periods within each breeding season. Drilling noise was erratic and inconsistent, while operation noise was more consistent and predictable.

This difference led to some unexpected results. The researchers found the drilling noise was much more disruptive to birds than operation noise, despite drilling noise lasting for a much shorter duration.

“I found it really surprising that drilling noise had such a big impact, while operating noise had almost none,” said Koper.

“We […] assume that it’s the length of exposure, if you’re exposed to for sound longer, it’s going to be worse,” said Rosa.

This is not necessarily true. As this research showed, the type of noise was more important than the duration. An analogy Rosa gave was to imagine working with construction next door — erratic drilling bursts would be more disruptive than a consistent background generator humming all day.

Birds would find the unpredictable interruptions more distracting and potentially alarming or threatening. Distraction for a bird could mean that they fail to detect a predator. For this reason, birds exhibited stronger avoidance responses to the drilling noise than the operation noise.

Another surprising find was that some birds avoid structures regardless of noise. These species give all infrastructure a wide berth, even something as small as a fence. The birds have evolved to view structures on the landscape as perches where predators could be lurking, and any structure is viewed as a threat to their offspring, so they will avoid building a nest nearby.

“Even something that looks like nothing to us can have a huge impact on whether they’ll occupy that habitat,” said Rosa.

“Remediating wells that are not operational should definitely be a priority because it does have impacts on the birds.”

This research reveals intricacies and allows researchers to provide more specific recommendations to oil companies and regulation groups. In turn, companies and regulators can incorporate this new understanding of how birds interact with the built environment into future projects and policies.

The good news is that simple solutions are available. Noise barriers are already used for drilling operations near urban areas to reduce disturbance. We could do the same in prairie regions to protect wildlife. Oil companies could also schedule drilling activities outside the window of breeding season to minimize disturbances.

“We should be spending our conservation dollars on mitigation measures that would have the biggest impact.”