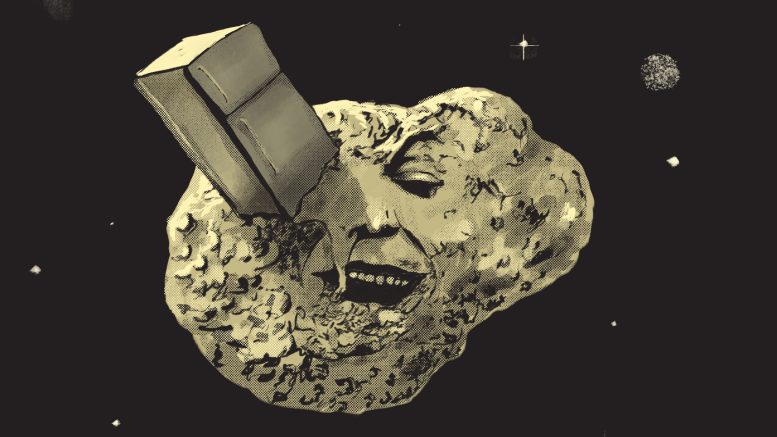 It was on Sept. 26 that NASA’s Double Asteroid Redirection Test (DART) — after traveling
for 10 months with a trajectory aimed at a small rock in the name of planetary salvation
research — made contact and collided with Dimorphos, a small asteroid about half the
height of the Eiffel Tower.

Earlier this month NASA declared the mission, which had the goal of pushing the asteroid
a small distance closer to the larger asteroid it orbits, a success. This success took the form
of shrinking the time to orbit by about four and a half per cent. This effect is over 25 times
greater than the 73-second change in time to orbit initially defined for success.
NASA applauded this feat. It was a failure on several fronts.

An experimental objective of throwing one object at another and wondering if there will be
a perceptible transfer of energy is a back-of-the-napkin problem for a physics student. As
anyone with any experience in the physics of snooker or car collisions can attest, the answer
is a definite yes.

Assuming successful collision, declaring experimental success was assured from the start,
and so this was less an exercise in scientific discovery and more a PR opportunity to bring
the terms of “planetary defence” via “kinetic impact” to the public fore.

A couple of decades would be necessary to attempt to divert a newly discovered asteroid
from a collision course with Earth, and while there are currently no known asteroids on such
a course for the planet, the sun’s glare hides any asteroids behind it, leaving a vacant
expanse in the asteroid landscape around Earth in the coming decades and centuries.

With a planned launch for the first half of 2026, the Near-Earth Object Surveyor telescope
project hopes to fill in that picture. A worst-case scenario would reveal previously unknown
asteroids headed toward Earth that are a matter of years away. This would leave too little
time to undertake a kinetic impactor mission.

A nuclear option for redirecting such an asteroid on a timeline of less than a decade is still
considered to be the best option, according to a study published last year in the research
journal Acta Astronautica. The limiting factor, however, is still the United Nations’ Outer
Space Treaty prohibiting nuclear weapons in space and the complex, possibly impossible,
international negotiations that would be needed to allow a nuclear missile into outer space,
ever were it for the purpose of asteroid deflection.

NASA defines astrobiology as “the study of the origin, evolution, distribution and future of
life in the universe.” From there, astro-ecology can be defined: how organisms, namely humans, interact with the broad cosmic environment and its resources. Asteroids and meteors fall within the umbrella of cosmic resources and environments.

A project undertaking such a stark remodelling of landscape, changing the orbit of an
asteroid with the DART mission would require an environmental impact assessment on
Earth. And indeed, such assessments are performed for space missions, but only in terms of
the launch itself, i.e. possible impacts on Earth. Sending a fridge-sized object on a one-way
trip to initiate an intergalactic rubbish heap needs no such meaningless document
preparation efforts.

Take only pictures, leave only footprints. But only if you are on Earth. In outer space?
Take orbits. Leave debris, refuse, rubbish, waste of all kinds, with no plan to return to
sender.

With a price tag of US$325 million, DART was an expensive crash-test refrigerator. This is
about as much money as World Vision Canada’s total revenue in 2021. It is enough to fund
CARE Canada’s operations for about three years, at 2020-21 levels. It is more than the 2021
program expenses for the World Wildlife Fund’s U.S. arm. It is about as much as Amnesty
International’s fundraising in 2020. All funds that would go towards helping the immediate
needs of the people and animals living on our planet.
A follow-up project is planned by the European Space Agency to take place in several
years’ time. It is an invaluable first investment in deflecting an as yet unknown asteroid
threat, a threat for which the technology is currently not available to detect.

The question this raises, and the most logical opportunity for future research, is this: if an
object is pushed harder, will it move farther? And, as a sobering early morning thought, the
path to the survival of the planet is through the establishment of remote outposts of
electrical, mechanical, industrial scrap and waste.

The superman of nature

Just another day at the beach