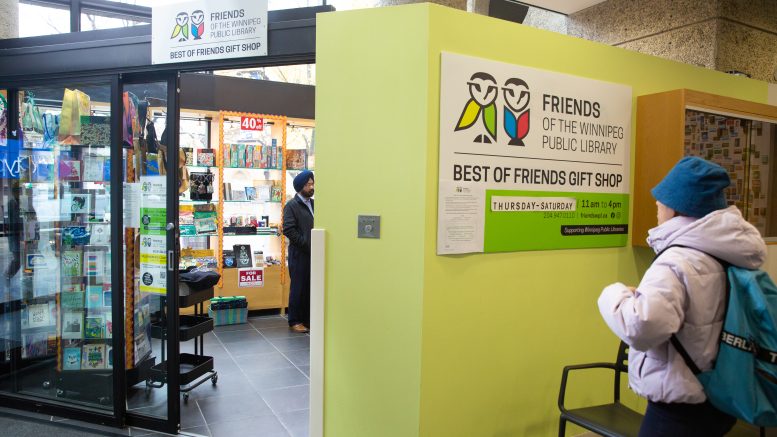 The Best of Friends Gift Shop might be easy to miss if you are passing through the Millennium Library, but its impending closure after 17 years of service will leave holes in the hearts of many library patrons.

The gift shop is operated through the Friends of the Winnipeg Public Library (Friends WPL), a non-profit charitable organization that has been in operation for 30 years and is dedicated to promoting literacy and learning.

Current president and long-time member of Friends WPL Rita Burgess told the Manitoban that the closure was due to various factors.

“A good deal of it was reduced customer traffic,” Burgess said. “We’ve also had a very challenging time with volunteer recruitment,” she added, explaining that this has not been uncommon for volunteer-run organizations

Over the past two decades alone, the organization has generated over $348,000 for library programming. They have done this by sponsoring other fundraising activities as well as co-sponsoring the annual Writer-in-Residence program, helping to fund the annual Spring Break program and providing items for different library initiatives.

The gift shop itself is volunteer run, and because of that it is difficult to find available volunteers who are able to commit long-term. There are no honorariums or paycheques given to those who help in the gift shop. It operates entirely on the availability of its volunteers and their hours.

“When you’re operating a gift shop you need to be able to commit to an amount of time, because there’s a certain amount of training and everything that goes into it,” Burgess explained.

“Some just don’t have the time anymore, some have aged out.”

Despite the closure and the rich history that will go with it, Burgess said that the organization has plenty of good things in store for the future, including their Spooktacular Trivia Night fundraiser which will be held Oct. 20 at the Winnipeg Winter Club.

“While it is a time that is very sad, as an organization we’re excited for the future,” she said.

As far as the official date for when the gift shop will close its doors for good, Burgess said that the plan is to have operations cease by the end of the year, but that it will depend on whatever is left product-wise by then.

“If individuals have things that they enjoy in the shop, they should probably get there sooner than later,” she said.

Burgess wants the community to know that she and the organization are thankful for the support that has been given to the shop over the years, and said that members of the community should “stay tuned to what the Friends are going to do next.”

“Let’s continue to keep libraries top of mind,” she said.

“Our libraries are so important in our community, and that’s what we feel so strongly about.”

The social cost of unaffordable housing