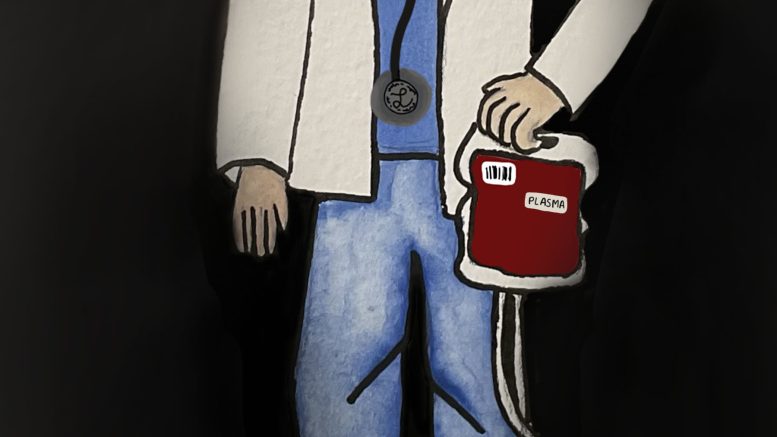 The human immune system exists to protect our bodies from disease, but sometimes a person’s immune response can cause just as much harm as the disease itself.

For example, the body cures infections by producing a fever, because disease-causing organisms have a more difficult time surviving in abnormal body temperatures. However, a fever that is too high for too long may damage the body.

Ryan Zarychanski, a physician-scientist at the U of M, is running a clinical trial with fellow hematologist Emily Rimmer. The trial studies patients with infections that are severe enough to require treatment in an Intensive Care Unit (ICU).

“You get really febrile, because that’s your body’s way of fighting off infection,” Zarychanski said — febrile meaning showing signs or symptoms of a fever. “But some people get so febrile that they have a seizure.”

About 30 per cent of patients with such severe infections will die, but often due to inflammation and blood clotting rather than the disease itself. 20 years ago, that figure was even higher, close to 50 per cent.

Zarychanski and Rimmer aim to reduce this mortality rate by changing the approach to treatment.

So far, the only reliably effective treatment for infections is antibiotics, which target the actual bacteria.

Instead of addressing the disease-causing agent, the clinical trial focuses on reducing unnecessary inflammation.

Much of the inflammation in an infected person’s body is caused by inflammatory proteins in plasma, one of the basic components of blood along with red blood cells, white blood cells and platelets.

The trial proposes to treat infection inflammation by removing an infected person’s blood. The inflammatory plasma proteins would then be extracted and replaced with plasma proteins from a healthy donor. Zarychanski referred to this extraction and replacement process as “purifying” the blood.

This purification is similar to dialysis, a process that replaces the function of the kidneys, which remove toxins from the blood. The person’s blood is removed, put through a purifying machine and returned to the patient.

Rather than removing toxins, then, plasmapheresis removes plasma, allowing doctors to replace inflamed proteins with healthy ones.

This treatment differs from traditional infection treatments in that it is not focused primarily on antibiotics. Increased dependence on antibiotics to treat infections has caused some bacteria to become antibiotic resistant.

If antibiotic resistance continues to rise, the medical community will be in danger of losing its primary method of treating infection. This would not only affect individuals with life-threatening infections, but also other more common infections that are normally treated with antibiotics, such as pneumonia.

Although children and the elderly are more likely to develop severe infections, Zarychanski stressed that anybody of any age or health status can be affected by them.

“You could be the 18-year-old, healthy football star who gets meningitis from spreading in the locker room, or you could be the sick person with cancer who’s had it for 10 years, so anyone can get an infection,” he said.

A unique aspect of Zarychanski and Rimmer’s trial is the fact that the data required for the trial is co-ordinated by the University of Manitoba. That makes it the first large national clinical trial operated primarily from Manitoba.

The trial’s first phase is run in Canada, and if it is successful, the second phase will transform the trial from a national to an international investigation. Zarychanski and Rimmer have connections with clinical researchers in the United States, Australia and Europe.

Since plasma cannot be synthesized, it must be supplied by donors. Prometic Plasma Resources is a centre at the University of Manitoba’s research and technology park where individuals can become plasma donors.

Their plasma is used to treat blood disorders such as hemophilia, and to make medications for people with compromised immune systems. Components of plasma can also be used to make diagnostic tests for certain diseases.

“Plasma is not a substance that can be produced in a laboratory or some other artificial environment,” the centre’s page explained.

“It can only be obtained from healthy adults. When you donate plasma, you are helping to save lives.”

40 years strong for Plug In