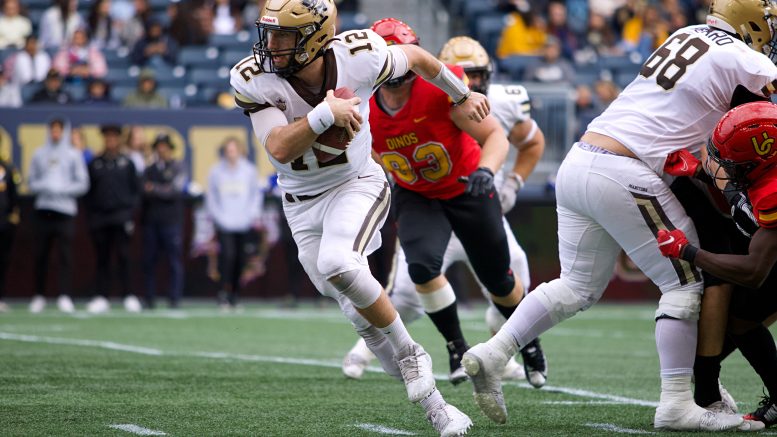 The run game was led in force by second-year running back Breydon Stubbs with 169 rushing yards out of the team total 352 rushing yards. Alongside his yardage, Stubbs notched his first touchdown of the year.

The game itself started out with a 48-yard return by Bison kick returner Kai Madsen, followed by a 17-yard rush by Stubbs. But it was the second quarter that truly started the action.

After three punts at the start of the second quarter, a barrage of points soon followed. The Bisons scored their second field goal of the night to put them up 6-0, and the Dinos responded with a field goal of their own.

The Bisons soon added to their lead with a nine-play, 75-yard drive resulting in a touchdown. An extra point later, the score was 13-3 for the Bisons.

The next drive by the Dinos was a disastrous series of penalties that culminated in a safety and another two points for the Bisons.

While the Bisons were forced to punt after the safety, they rebounded with an interception from linebacker Dolan Hills. The Bisons capitalized off the Dinos’ turnover with a touchdown from De Shawn Le Jour putting themselves in a comfortable 22-3 lead over Calgary.

The Bisons would finish the half with a Niko DiFonte 30-yard field goal that brought the score to 25-3 for the home side.

The second half began with five punts from both sides. The Dinos notched a single point making the score 25-4 and marking their first answered point since the 10:10 mark in the second quarter.

Three drives later, the Bisons once again found themselves in the end zone following an eight-play, 81-yard series capped off by a Jackson Tachinski goal line push, upping the Bisons lead to 32-4.

This game’s score was meteoric for the Bisons and gave them a second straight win, as well as their second win of the season.

While the Bisons lost this last weekend 43-22 to the Saskatchewan Huskies, they will have this fabulous win against the Dinos as motivation for the future.

The Bisons next game is a rematch with the UBC Thunderbirds in Vancouver on Oct. 15.

Gearing up for the fantasy playoffs – part two