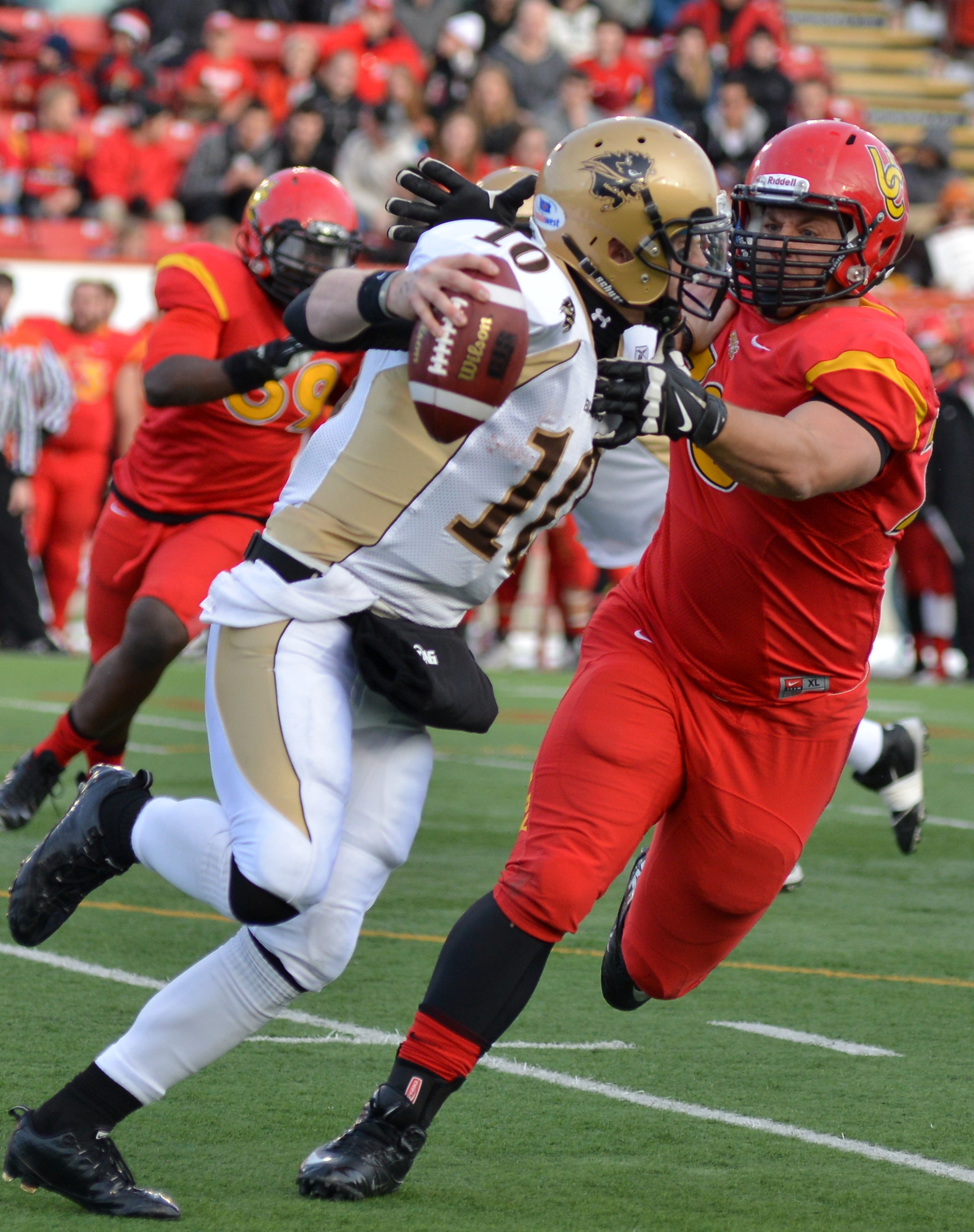 The Manitoba Bisons were officially eliminated from the Vanier Cup hunt, with a 43-28 loss at the hands of the Calgary Dinos on Saturday afternoon at McMahon Stadium.

The Dinos jumped out of the gate with fervor, scoring a touchdown on their first drive of the game courtesy of a 27-yard run by running back Mercer Timmis, who had a brilliant game for Calgary. Things got worse for Manitoba on their first drive, as Canada West all-star running back Anthony Coombs went down on the first play from scrimmage and never returned. The Dinos added two more points to their total on that same drive, forcing Manitoba to concede a safety after pinning them deep in their own end.

The Bisons were shut down for most of the first, but mounted a solid six-play, 67-yard drive to end the quarter, capped off by a brilliant 21-yard touchdown reception by Kienan LaFrance, who played valiantly in place of the injured Coombs. Heading into the second, the Dinos led 9-7.

The second quarter was all Calgary, as they outscored the Bisons 17-0 and took a 26-7 lead into the half.

The Dinos moved the ball 98 yards on 12 plays, capped off by a Jake Harty seven-yard touchdown reception at 4:47 of the second. Calgary struck again on their next drive, this time on a big 57-yard touchdown pass from quarterback Andrew Buckley to Canada West rookie of the year Rashaun Simonise. Calgary capped off their scoring with a 43-yard Johnny Mark field goal with less than 30 seconds left to play in the half. Manitoba quarterback Jordan Yantz struggled to find a rhythm in the first half. Calgary’s front four provided enormous pressure, essentially shutting down the Bisons’ passing game. The Bisons got a bit of luck at the beginning of the second half. Manitoba defensive back Jordan Linnen recovered a Simonise fumbled punt reception deep in Calgary’s zone. The Bisons wasted little time capitalizing, Yantz found receiver Andrew Smith in the end zone from 19 yards out, cutting the Calgary lead to 26-14. That was where the Bisons’ luck ran out. The Dinos proceeded to outscore Manitoba 10-0 in the final 13:15 of the third quarter. Calgary’s scoring started out on the following drive after the Bison touchdown, as fifth-year running back Cuong Thai Lieu scooted into the end zone from 42 yards out. The Dinos added a field goal with 2:29 left in the quarter to take a comfortable 22-point lead into the fourth.

Manitoba would not go down easily in this one, getting back on the scoreboard with 7:40 left in the game on a 37-yard Yantz touchdown pass to Matt Sawyer. The scoring play was set up by a massive 64-yard reception from Nic Demski. The Dinos seized the momentum right back after the scoring play, as Timmis secured his second touchdown of the game with 4:49 left. The 33-yard touchdown gave the Dinos a 43-21 lead.

Manitoba kept fighting, scoring on their next drive, a nine-play, 83-yard march downfield capped by a 13-yard Smith touchdown reception. The Bisons then recovered an onside kick, but were unable to capitalize.

Timmis was the gamebreaker in this one, piling up a Dinos post-season record 279 yards on 28 carries, as well as two touchdowns. As a whole, the Dinos put up a whopping 623 yards of total offence, marching up and down the field all day.

Yantz finished the day 18-of-40, with 277 yards, along with four touchdowns and two interceptions. It was another strong performance, but ultimately was not enough to keep the Dinos from their sixth consecutive Hardy Cup title.

The Dinos will move on to face the Western Mustangs in the Mitchell Bowl next weekend.

Right down the middle: Stats show that NFL kickers are better than ever

Gains but no payoff for Manitoba Bisons in playoff rematch