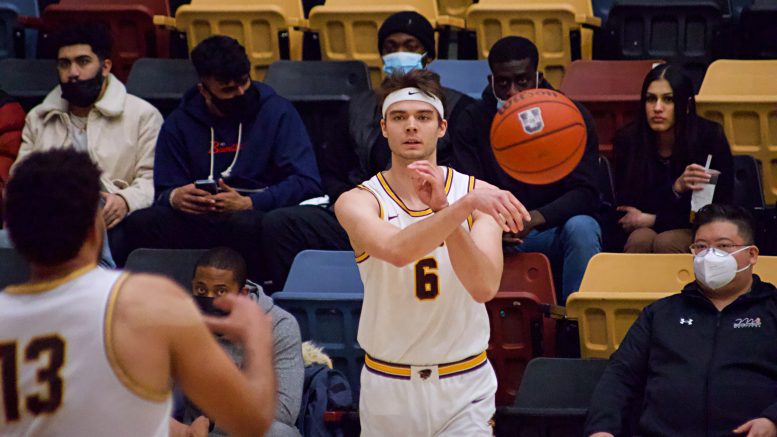 The University of Manitoba Bisons men’s basketball team will play their first game of the
2022-23 season on Nov. 4, where they will face off against the University of Alberta Golden
Bears. The team is hopeful to see growth and improvement over last season’s second-half
collapse, and have good reason to think they will.
At the beginning of last season the Bisons caught lightning in a bottle, winning six of their
first ten games. However, the lightning soon escaped them. The Bisons finished last season
losing six of their last seven games, and finishing with a 7-9 record and a sub-.500 winning
percentage — not the end to the promising season they had set themselves up for.
U of M Bison forward Cieran O’Hara said that he expects the team will find success
offensively this season. He noted that this year, the Bisons are a fairly young team, and said
they will benefit from playing at a fast pace.
“I think a lot of it has to do with just coming out, starting our game with a high tempo,”
O’hara said.
“Last year I think we struggled with keeping our energy levels high throughout the game
and going into the second half. So, I think coming off the bench, it will be important for
everyone to stay engaged.”
When asked about the makeup of this year’s team, O’Hara said that the squad looks like a
“good group” with strong veteran leadership. He added that the entire team is having fun so
far, and that now is “the closest the team has been in a while.”
Tying back to the team’s camaraderie, O’Hara said that the team’s bond makes them
more motivated to be “accountable for each other,” which he said propels the team to do
better than the previous year.
The Bisons ended this past pre-season with a 2-3 record. Within those three losses, the
largest deficit was a mere eight points, and the team’s final pre-season game featured a 20-
point blowout victory over the Western University Mustangs.
The team will not let last season’s disappointments deter them from moving forward.
O’Hara, when speaking of his expectations for this upcoming season, said “I think a lot of
what will come this season is just a lot of growth and learning.”
The Bisons have a great mix of youthful energy and veteran experience with players like
third-year guard Mark Tachie and fourth-year forward Wyatt Tait. The team is aware of their
issues and have worked to fix them.
Last season began with hope and excitement, but ended with disappointment and
frustration. This season is different and brings new challenges to face, only this time with
past lessons to help guide the way.

Legends of the periphery