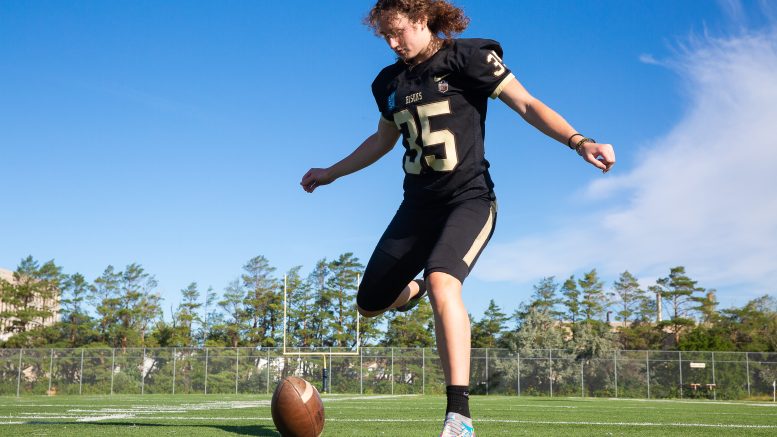 Coming from the soccer field after years in the game, 20-year-old Maya Turner knew how to kick a ball.

“I played soccer my whole life, through my first year of university and the start of my second year, but I just got burned out and I just had to quit,” she said, “but I’d always loved football as a sport.”

“I’d always wanted to try to kick a football, but I never really got around to it. But when I quit soccer, I just thought I’d try it out.”

After trying out for Loyola University’s club team in Chicago, her goal, in her words, was “to see what I could do with the ball from there.”

This season, Turner is Bisons Football’s newest kicker. While she isn’t the first female player to have played on the team — that title belonging to Reina Iizuka, who in 2018 was the first female ever to be on a U Sports football roster — Turner is a further example of how Bison women continue to break glass ceilings on the football field.

After pulling off a 25-yard field goal in a pre-season game against the University of Saskatchewan Huskies, Turner is the first-ever female player to score points in a U Sports football game.

“Being on the football team and playing football is just so much more fun than I’d ever had playing a sport,” she said, “the team environment is just really supportive and inclusive.”

“Everyone on the team loves the game, and is having a lot of fun.”

Hailing from Minnesota, Turner had been preparing for her role since early 2022 by working on her skills and contacting coaches, one of whom was Bison football head coach Brian Dobie, who was interested in meeting her in-person.

“When I went on my visit here, I just knew this was the place where I wanted to be,” she said.

Now that she’s at the U of M, Turner has enrolled in the school of art majoring in graphic design and she plans to stay here for at least the next four years.

Her plan now is to “just keep playing football here and see where that can take me,” she said.

“I’d love to play football for as long as I can.”

While Turner had always loved football, she never really thought it was an option for her. After she quit soccer, she thought, “I have nothing to lose, why not just try it?”

After following her dreams and accomplishing her goals, Turner wants other girls to know that they can do the same.

“If you want it enough then there’s nothing stopping you, and don’t let being a girl deter you from your dreams.”