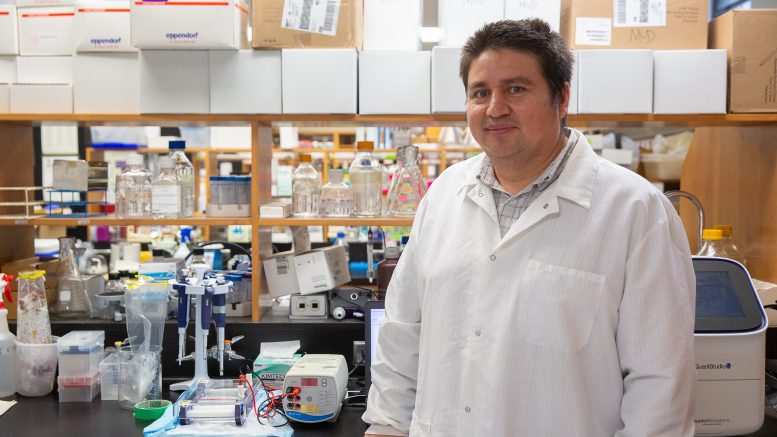 Research Manitoba’s New Investigator Operating Grant Competition — which funds the supplies and equipment needed for new investigators in Manitoba to establish independent research programs — has recently announced its 2022 recipients. Among them is University of Manitoba assistant professor and Indigenous scholar in the department of microbiology Miguel Uyaguari, who won in the natural sciences and engineering category.

Uyaguari’s research project, “Analyses of the phageome and resistome of a First Nation community wastewater treatment facility for development of an aquatic health monitoring tool,” would investigate the microbial communities in First Nations water treatment plants.

According to Uyaguari, oxidation lagoons — large shallow ponds that use algae, sunlight and bacteria to treat wastewater — are commonly used to by First Nations communities in rural areas of Manitoba.

These oxidation lagoons are typically a secondary wastewater treatment method. In contrast, Uyaguari noted that the city of Winnipeg uses a complete wastewater treatment plant that goes through physical and chemical treatments as well as disinfection with ultraviolet radiation before the treated effluent is released into aquatic environments.

Uyaguari explained that during the transportation of raw sewage from septic tanks to the oxidation lagoons, gravity causes the solid waste to settle at the bottom of the lagoon while the supernatant — the liquid floating above settled residue — collects at the top.

For his grant-winning research, Uyaguari said that he plans on studying what microbes are present in these oxidation lagoons. He added that his choice of research topic was influenced by the lack of studies on these types of systems in Canada.

Uyaguari said that his research would characterize bacteria and viruses using molecular biology techniques such as DNA analysis to determine the types of microbes present in the different stages of wastewater treatment in First Nations communities.

“A phage is a virus that infects bacteria, and they act as mobile components or mobile elements, and these elements can transfer genes of resistance,” Uyaguari said. “Phages, these viruses, also are able to transfer these types of antibiotic resistant genes.”

“We would look at specific databases to look for anti- biotic resistance genes in these microbial communities,” he said.

He noted that he does expect to find a significant number of antibiotic resistance genes from the bacterial community, however, not many studies have been conducted previously on phages.

After initial characterization of the bacterial and viral community, the next component of Uyaguari’s research would involve checking the functionality of the genes. He further elaborated that with that information, mathematical models can be used to determine the most prominent resistance genes in these systems, allowing one to design primers or probes to target specific genes.

“The tool that that we will try to develop is to try to find what are the most prevalent antibiotic resistance genes that are present, or that are being released into the aquatic environment?” he said.

“They work with the community, in this case the operators of the oxidation lagoons, we’re going to rely on their expertise,” he added.

“The long-term goal will be to improve the water quality that goes into the aquatic environment from these smaller communities.”

Uyaguari explained that this is important as these aquatic bodies are used for recreational and agricultural purposes within these communities.

UMFA, U of M extend mediation

Neutrinos are faster than light, some weeks