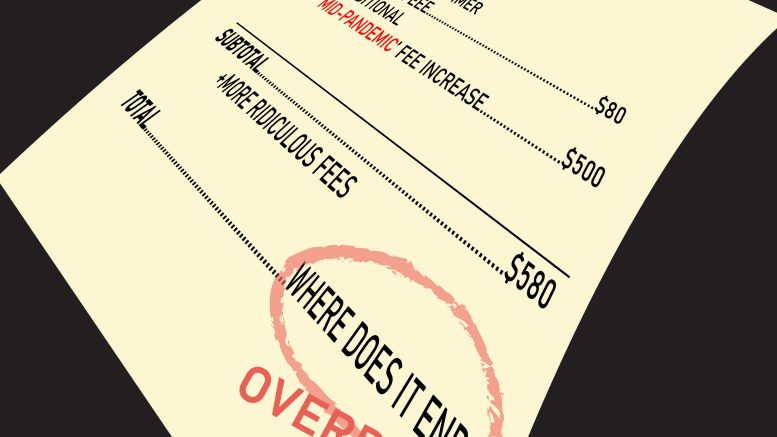 Whether universities want to admit it or not, they are part of the customer service industry.

This may come as a shock to some before the prestigious mythos of an elevated institution wears off, but the reality is that the university as a place for post-secondary education is akin to a counter-service only restaurant:

The trouble is, as a metaphorical restaurant, the university doesn’t understand its role toward its customers, the students.

For example, with a surplus of $94 million in the 2020-21 fiscal year the university — regardless of the fact that the University of Manitoba Graduate Students’ Association (UMGSA) advocated that graduate student fees should not go up, particularly during the ongoing pandemic — upped graduate student summer fees by at least 464%.

Previously, an enticing feature of completing a graduate degree at the U of M was the low summer semester fees.

With a continuing fee of $500 in the fall and winter semesters during the 2020-21 academic year — which has also gone up over the years — graduate students got a break in the summer semester. By simply paying organization and registration fees, which have also increased over the last few years, registering for the summer semester before 2021 amounted to around $100.

While some may not see why the placement of a continuing fee year-round is so disastrous, one should keep in mind that the summer semester takes place in a very different academic environment than the fall and winter terms.

Graduate students are still busy working away on their theses and dissertations during the summer months, but depending on how reliable their advisor, committee or department is, some graduate students may find it harder to receive a reply during this time.

On top of the fact that there is no summer U-Pass and with the lack of overall academic support during the summer months, the graduate student summer semester should only really amount to $100 worth of fees.

The second part to all of this is that the increase happened during the pandemic.

So, while in a crisis to sustain food and shelter, graduate students had to scrounge for half-a-grand more for a semester where they are continually underserved.

And if you couldn’t pay you were penalized — assessed a late fee, holds were placed on your accounts — and, in the most extreme circumstance, you were removed from your program.

It is easy for the U of M to state that it still offers, “on average, the lowest tuition in Western Canada,” but the reality of surging inflation complicates this claim.

Those who have managed to cling onto their programs are now watching while the province continues to cut post-secondary support, which affects both graduate and undergraduate students.

This is alarming not only because it signifies that the province is pivoting toward post-secondary education being solely affordable for the rich and upper class, but also because through this the university has designated that graduate students should only be of a certain social echelon.

Even if this is inadvertent, it implies a dangerous precedent of class division that hasn’t been seen since before the world wars.

What solutions could there possibly be? Well, the tone-deaf “prioritizing your own self-care” emails from the university’s administration could be dialed back. Far from prioritizing students, the university upped tuition over the Zoom years of the pandemic, placed the burden of technology and Wi-Fi connections on already cash- strapped students, and offloaded student university mental health resources onto programs that can be difficult to access and navigate.

If there isn’t a shift toward free post-secondary education in the next few years, perhaps a lock-in method of tuition is needed to corral the ever-increasing rise in fees.

For example, if you were a graduate student who started their program in the days of $50 summer fees, you should be locked into that tuition by a contractual handshake in your registration, while incoming students would be the ones who may face higher fees. Though this might not be entirely sustainable, it is an interesting proposition.

What remains most troubling is the pricing of human beings out of education.

Perhaps what the university doesn’t understand is that if it keeps increasing fees — particularly in the manner of the drastic graduate student summer tuition increase — it will have fewer students and, consequently, less money.

If the university doesn’t want to look like it’s pandering to the wealthy, it can afford to maintain lower tuition fees for its students instead of continually increasing them, as the university has tens of millions of dollars in surpluses to sustain itself.

U of M library jobs cut in staff restructuring